The Final of A Minute to Win It at the Coloneum 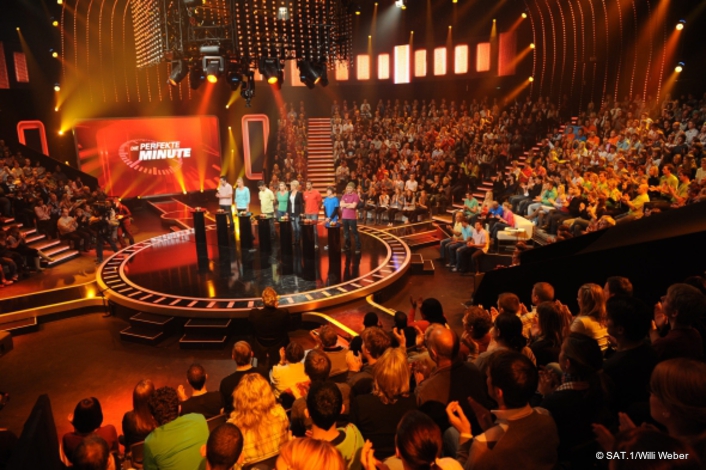 The second season of A Minute to Win It started on Friday, the 25th of February 2011
On the 29th of April 2011 at 8:15 PM, German private broadcaster SAT.1 showed the 100,000-Euro finale of the game show Die perfekte Minute (A Minute to Win It), with host Ulla Kock am Brink. This show was recorded at MMC’s stage 32.

In A Minute to Win It, every contestant can win up to 250,000 Euros. In 60-second challenges, the only adversary is the clock, and the only requirements are skill and training.

In this second season of the SAT.1 game show, the motto is “Take two!” In contrast to Season 1, the contestants no longer compete as individuals, but as teams of two. Each episode of the show has its own theme, be it identical twins, spouses, colleagues or unmarried couples.

The second season of A Minute to Win It started on Friday, the 25th of February 2011, at 8 PM. It featured 8 new episodes and a celebrity special.

So far, the seven two-person teams that each won an A Minute to Win It episode together have earned a total of 625,000 Euros in 51 one-minute games. In the finale of the second season on April 29, 2011, these seven winning teams will got the chance to win another 100,000 Euros.

Like the first season of A Minute to Win It, the show’s current episodes were recorded for Shine Germany before a 500-member audience at the Coloneum. The director was Mark Achterberg.

MMC provided all production services for the show. In addition to the normal video, audio and lighting services, MMC provided moving lights, media technology, set construction, and the post-production.

In total, 11 cameras were used for the production at MMC Stage 32. They included 5 cameras on studio pedestals, a Super SloMo camera on a studio pedestal, a hand-held camera, a wireless steadicam, a camera on a SuperTechno 30-crane, a Towercam and a lipstick camera.