FILMS@59 Gets Into Bed With Ecosse Films' Mistresses 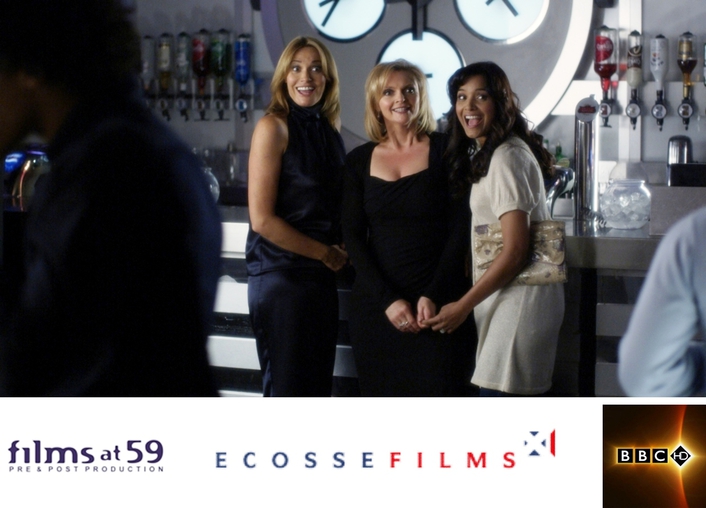 Orla Brady (Siobhan), Sharon Small (Trudi) and Shelley Conn (Jessica)
Award-winning pre and post production facility Films@59 has today announced that it has provided all post production services for the new season of BBC One and BBC HD’s popular drama series Mistresses. The four x 60 minute production, which airs throughout August on Thursday evenings at 9pm, was produced by Ecosse Films and was shot on location in and around Bristol on the RED One camera, also supplied by Films@59.

Sarah Parish (Katie) returns for the final series along with the other three main characters Orla Brady (Siobhan), Sharon Small (Trudi) and Shelley Conn (Jessica). Actress Joanna Lumley also makes an appearance playing Katie’s mother (Vivienne). DoP Alan Almond and Producer Rhonda Smith had very specific ideas for how the series should look reflecting a much darker storyline than the first two series, which had lighter scripts and a high contrast feel. They also wanted to move away from film and go digital. Almond explains, “Lighting was a key element throughout the shoot. I initially did some lighting tests with stand-in models to assess whether we needed to use filtration and which particular filters should be used. I opted for the Tiffen soft effects filters, which give a really nice diffuse look without being too obvious.”

Director Tim Fywell also wanted to distinguish the new series of Mistresses from other contemporary television dramas. Almond adds, “We wanted to move away from the American look that you often now see with English drama. The idea was to achieve a look that was darker and richer but without too much contrast and one that would not be overly saturated. The premise throughout filming was to achieve a natural look paying particular attention to the flesh tones of the four main female characters.”

Films@59 carried out all of the digital dailies data preparations. George Panayiotou, Business Development Manager, Films@59 explains, “The production team had a DIT (Digital Imaging Technician) on location, dailies were then delivered to the facility and our in-house technician prepped the rushes for the edit suite and completed all the viewing uploads and DVD copies. The offline edit, which was carried out on Avid Media Composer by Mary Findlay and Clive Barrett, ran alongside the eight week shoot.”

Panayiotou concludes, “We are all delighted with the result, which is quite unique. The production has retained an edgy cinematic feel rather than resembling a glossy HD video production.”

Films@59 was founded in 1990. Since then the facility has grown considerably in size, and invested hugely in new equipment and training to enable it to stay at the forefront of new technology. Its aim remains the same today as when it first started...to make clients’ pre and post production path as smooth and enjoyable an experience as possible. For further information see