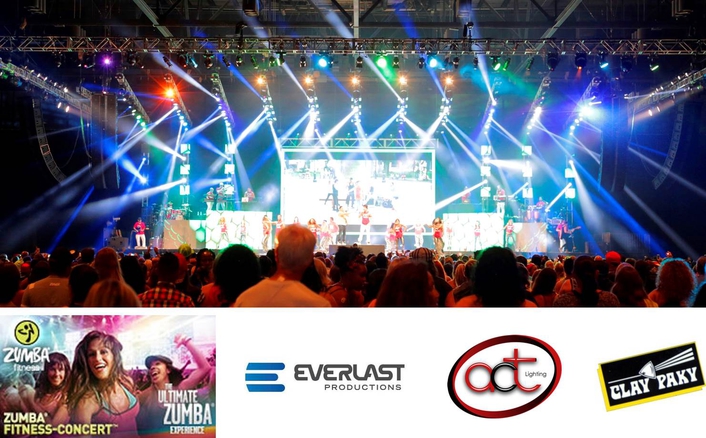 Everlast Productions, Inc. in Miami, Florida has taken delivery of 12 Clay Paky Stormy fixtures, which were quickly dispatched to the dynamic Fitness-Concert at the 8th Annual Zumba Instructor Convention.  A.C.T Lighting, Inc. is the exclusive distributor of Clay Paky products in North America.

Everlast Productions provides creative and technical solutions for live event experiences worldwide. The company, which has a complement of Clay Paky Sharpy fixtures, decided to invest in Stormys after seeing them in action at an A.C.T demo. “The quality of the fixture was very high, and the light was phenomenal.  We thought they’d be an exciting addition to our inventory,” says lighting designer David McCranie.

The innovative Stormy uses the latest LED technology while retaining all the charm of the classic strobe.  Its light source is a strip of powerful white LEDs, which perfectly emulate a bright Xenon linear lamp.  The flash effect is enhanced by the Stormy’s parabolic reflector, like a classic strobe’s, which does not project the light directly forward like other LED strobes.

The annual Zumba convention, at Orlando’s Orange County Convention Center, is the largest gathering of the global Zumba family.  This year’s Zumba Fitness-Concert was a 90-minute, non-stop show featuring Zumba creator Beto Perez and a dozen artists, including singer Prince Royce and reggaeton performer Yandel, plus a 10-piece band, percussionist and LED drums.  An audience of thousands of licensed Zumba instructors danced in sync with the choreographed songs. 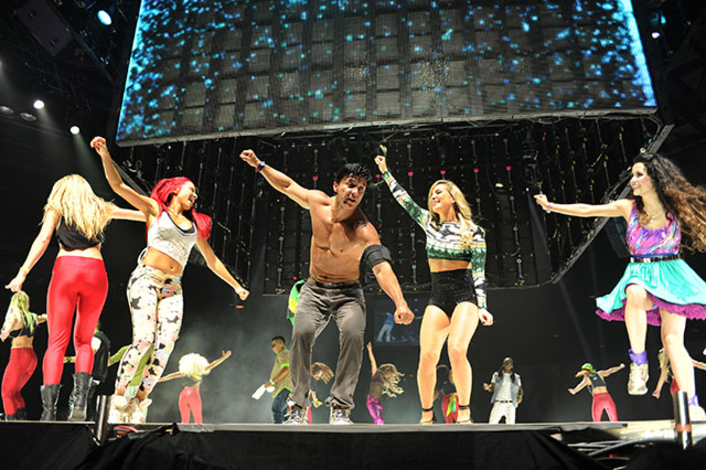 “The Fitness-Concert was very high energy with a super-intense look.  Artists performed on multiple risers at many different levels; there was an 8x8-foot lift in the middle of the thrust, a large LED wall upstage, pyro hits and hazers,” says McCranie.

The show required strobes that would not flicker during the 8-camera HD video shoot, he notes.  “We tested the Stormys, and there was no flickering,” McCranie says.  “We scattered the Stormys around the rig on the overhead trusses.  They provided hits for the music and exciting crescendos on songs: When the tempo was up, the game was on for the strobes.  They really vibed out the place and created an exciting atmosphere.”

McCranie also mounted 86 Sharpys on both overhead and ground trusses.

The lighting designer prevised the show for several days in Miami using grandMA 3D.  For the show, he deployed a pair of full-size grandMA2 consoles, one active and one back up, with primary and back up NPUs to control the lighting and video, which consisted of preproduced live-action and graphical content and IMAG.  “grandMA2 is at the heart of all the shows I do,” he says.  A.C.T. Lighting is also the exclusive distributor of MA Lighting products in North America.

McCranie was impressed by the Stormys’ performance.  “They were easy to program and let me do lots of effects – a real pleasure to use,” he says.  “I’m delighted to continue my long-standing relationship with A.C.T, a relationship that spans some 15 years.”

Doug Mekanik, Eastern Outside Sales for A.C.T Lighting, concluded, "We have a great relationship with Everlast Productions, a top notch lighting company who are always on the cutting edge.  The Stormy is an amazing new light and we’re pleased to see them getting the most from this fixture.  We look forward to future collaborations with them."

Francesco Romagnoli, Clay Paky Area Manager for North and Latin America, added, “Everlast is a great and creative company and we’re pleased to see them deploying our Stormys for such interesting applications.”