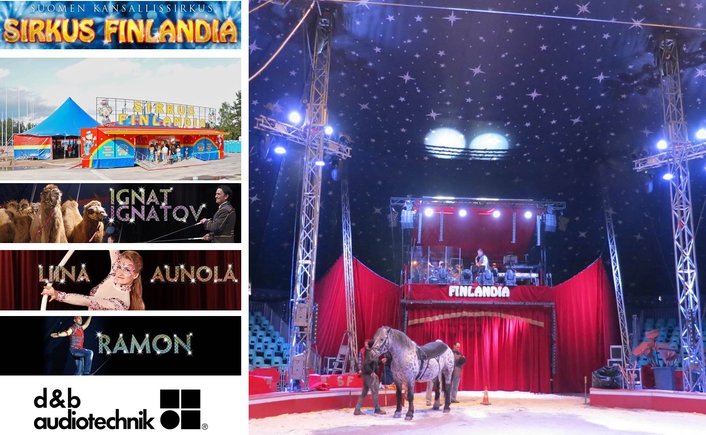 .
The Finnish equivalent of 'roll up, roll up', doesn’t really translate into English, but that aside the language of circus is nothing if not international; even the horses seem to understand. "Good point said BonBon the clown, or Lasse NØrager as he's known to his family. "Communicating with animals is one of the most important things that happen under the big top. That's why we paid it so much attention when we considered purchasing a PA system for Sirkus Finlandia." NØrager, besides his talent for visual humour, doubles as technical advisor.

"I have been with the circus for thirty years. In Finland circus began to engage with modern lighting about twenty years ago, sound about ten years later. I've been looking after the Sirkus audio system for the last four or five years. By profession I'm a performer, but I've worked with sound since I was a teenager, I have done live mixing, studio recording, all sorts. I already had a good experience with d&b audiotechnik loudspeaker systems, I had used the d&b C systems with B2-SUBs before, but now we wanted something more compact and faster for touring. We make over two hundred and fifty shows in the touring season, and believe me, being this far north the Finnish touring season doesn't last that long, about seven months. We weren't looking for power; we wanted something different for our audiences."

The circus had other important considerations, not least the horses, "The tent accommodates one thousand two hundred people and my idea was for the sound to appear natural, exactly as if it was coming from the position of our live orchestra. The orchestra is positioned above the ring entrance. My concept was for a d&b T-Series rigged stereo either side near to the band."

NØrager had seen and heard the T-Series through a colleague, "He had purchased a system for an installation, I went and listened and thought, this could be ideal for the circus application. Rigged up beside the orchestra does mean we end up with the performer's mic in front of the PA, but that is pretty much always the situation with a circus. I chose T-Series because it easily fulfils the demands for size and power, and there is a real advantage from having a well defined and known dispersion above the ring performers, and likewise beneath the aerial acts, because of course they need to hear commands. That is especially true for the animals; a clown or trapeze artist might read the visual signals from their partner, but a prancing horse won't, they need to be able to hear." 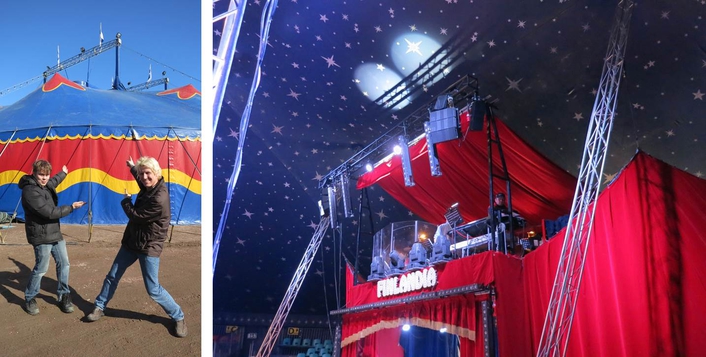 NØrager approached Tero Hölttä at msonic Oy (the d&b distributor for Finland), "We modelled the tent space and arrived at three T10 each side," said Hölttä. "That's enough of a line array to create the inherent hundred and five degree horizontal pattern, and we have enough elevation being up at orchestra height to shoot above the ring floor avoiding most microphone problems." NØrager saw the system design in clearly defined technical terms. "The directivity is so good there's little energy into the roof, so we don't get that pumping off the fabric, even at higher SPLs. The 105 degrees of the T10 covers the main audience, then we fill the fine outer audience at the sides with a T10 each side in point source mode, laying on its side to produce 35 (h) by 90 (v). It fills the space perfectly."

"Between Tero and me we resolved a mono SUB solution and it is ideal. One B2 is enough and the single source means no low end holes or peaks in the venue. We did consider B4-SUBs, the T-Series natural partner, thinking the cardioid pattern might prove advantageous, but in the end the B2 solution is better for speed of rigging and simplicity. Speed is always an important consideration for a touring circus. I particularly like the d&b range because in my experience it always sounds good whatever you put into it. In the tent I use almost no EQ and that's typical of my experience with d&b systems. It's also a well established brand; when you're touring one hundred and twenty five cities in seven months that's important if something happens, I haven't found an amplifier yet that can survive a king pole being dropped on it; at short notice you can find a D12 pretty much anywhere in Finland."

The Sirkus Finlandia started its 2013 season the first week in April, NØrager reliably informs us that the horses like the new sound system, "Put it this way, there have been no complaints from their stable. To be honest they are more interested in their hay-phones."