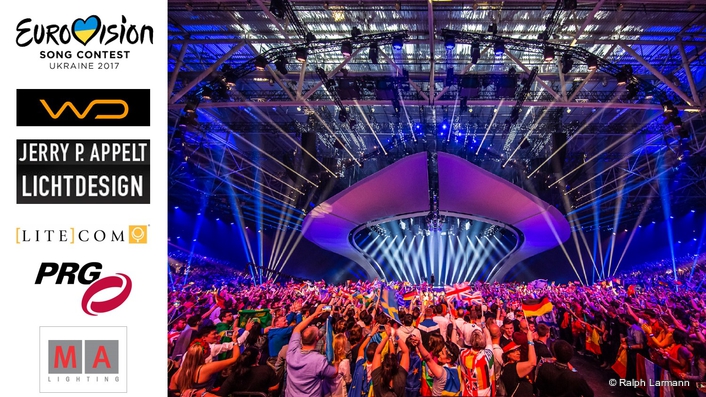 All the glamour, glitz and fun, all the elaborate costumes, extravagant performances, excitement and high-pressure of one of the world’s biggest live telecasts, the 2017 Eurovision Song Contest was staged at the International Exhibition Centre in Kiev, Ukraine with 42 countries competing.

As always, production for the two live semi-finals and final were world class. The shows were enjoyed by 7,500 people packing in to the venue and around 200 million on TV, all appreciating the amazing production design by Florian Wieder working closely with lighting designer and DoP Jerry Appelt plus a massive technical team managed on site by head of production, Ola Melzig. 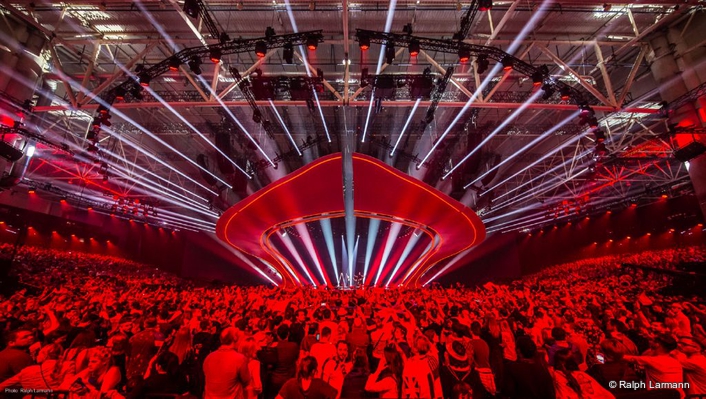 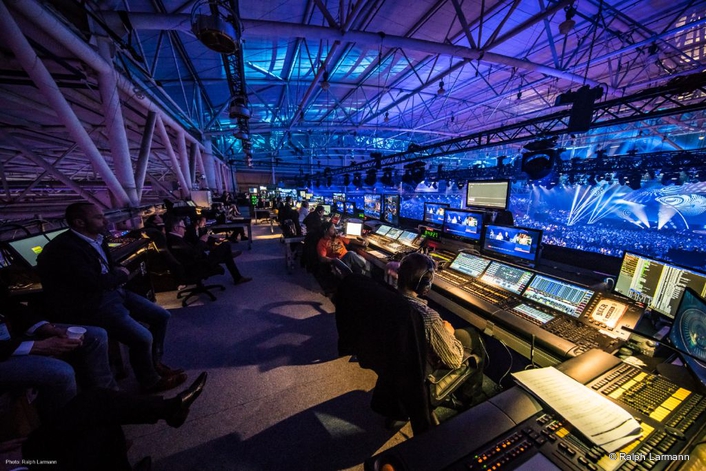 One console was run by Jack Collins, freelance lighting and systems tech working for PRG Germany and brought on-board as a network and lighting data specialist. He used Paessler PRTG software to monitor the entire lighting and video data / hardware control network.

Another grandMA2 desk was used by the Swedish delegation during their show to control moving treadmills and their associated LED specials and one grandMA2 was on standby in case of emergencies. The dot2 core was used side stage to fire all the pyro cues which were designed by Markku Aalto. 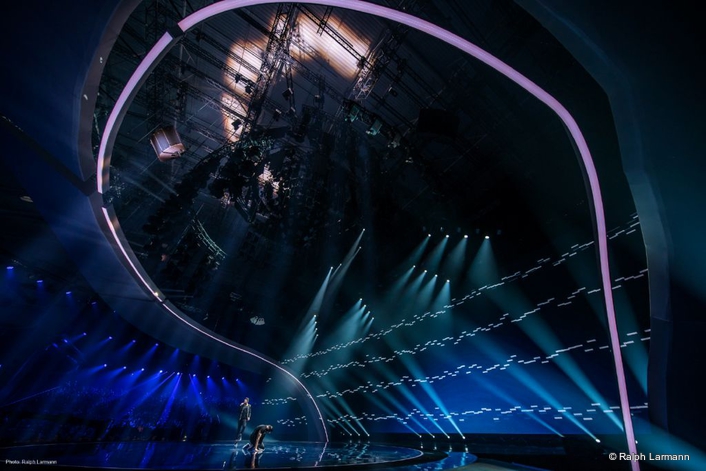 These were joined by 25 x MA NPU (Network Processing Unit), 17 for lighting, three for video, two active but not in the session plus three spare. There were a total of 30 x MA 8Port Nodes, 5 x MA 3D visualisation systems, 4 x grandMA2 fader wing and 16 x video servers all in the control network.

These grandMA2 control elements were specified by gaffer and lighting technical manager Matthias Rau, from Jerry Appelt’s team, and they reached the maximum amount of 31 x MA class 1 network devices (desks and MA NPU) plus the MA 8Port Nodes and MA 3D on top!

The total parameter count being controlled across the MA network was 88,466 and the fixtures being controlled including all their respective individual LED pixels amounted to 9,857. A massive 18,536 cues were in the final showfile, activated across 164 console executors (Playbacks) and 226 patched universes! 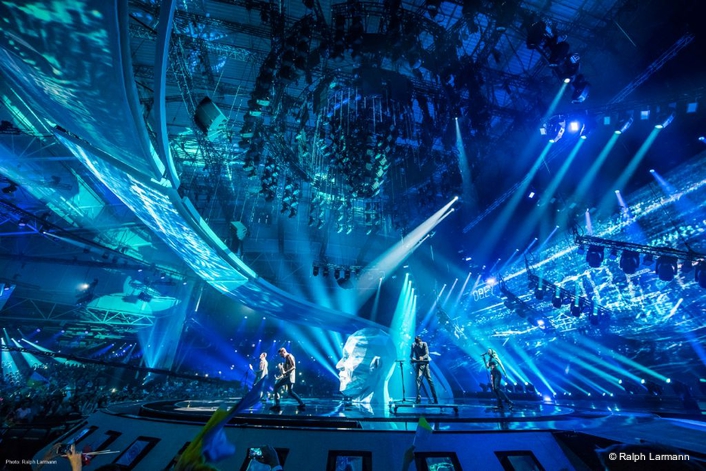 Five Data Cities (DCs) were established, two in the arena - one at FOH split left and right - one house left and one house right and one behind the stage/video wall with three fibre rings running around the arena connecting these to FOH via switches - 34 in total, plus four 8port truss mounts - for the whole control network, running in RLinkX mode for full redundancy.

Ring 1 was dedicated only to MA-Net2 protocol, Ring 2 was a mix of MA-Net2 and ‘Funny Net’ and Ring 3 was ‘Funny Net’ – which consisted of assorted VLANS, Art-Net, Schnick Schnack Net, Internet and any other extraneous VLAN that was needed! 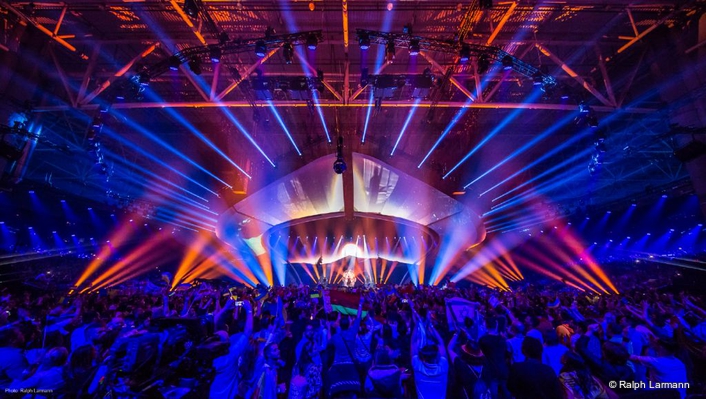 DCs 1 and 2 were identical, located left and right of the stage, dealing with data and power feeds for the whole stage area, split equally stage left and right. LX1 – 1 of 40 lighting trusses - nicknamed “The Beehive” dealt with the centrepiece which comprised 56 MagicPanel FX units and 40 hybrid moving lights, which also ran over DC 3 positioned upstage of the video wall. All the floor fixtures and a 39 x 9 matrix of 24-pixel LED strobes also ran over DC 3. The audience trusses – complete with around 595 fixtures – all had their data and power supplied via DCs 4 and 5 under the FOH area. 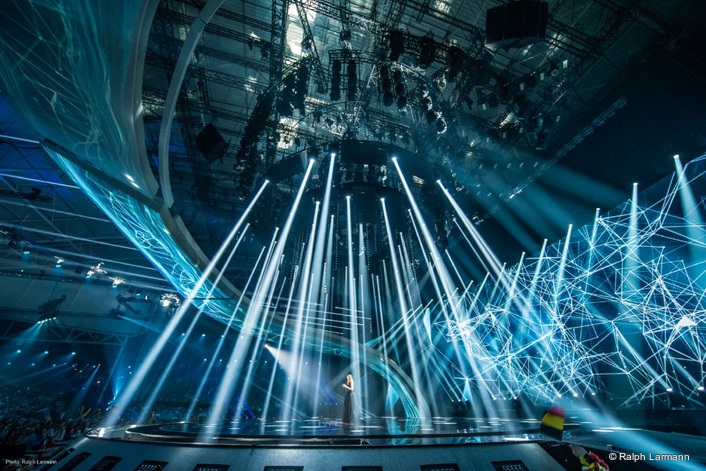 Another 24 x Magic Panel FXs were integrated into the front of the stage all running on Art-Net to simplify the DMX cabling due to the high amount of DMX channels per unit. There were also around 2,500 x LED strips integrated into the large scenic arch / set portal and the stage steps and flooring. The attractive LED circles around the delegation seating areas in the green room at the back of the arena consumed around 600 metres of LED tube and all of these components were routed via the Funny Net.

PRTG played a fundamental role in monitoring both the network and all the system hardware. It allowed Collins to see any irregularities immediately on one screen and identify and deal with any issues across the entire system quickly and efficiently. 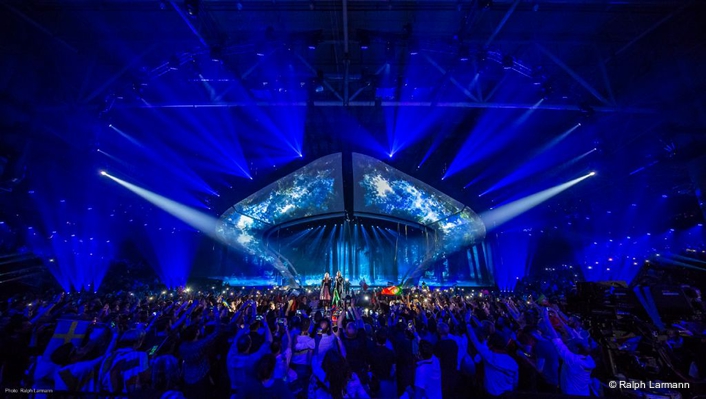 “No matter what you need from the grandMA2 system, there is always a way to do it and often there are several approaches to achieve what you need”, stated Jack, adding, “For me as a control systems engineer, it was not just the ability to see what everyone is doing and how stable the system was running, but to also go back and look at the history of who or what has caused issues which was absolutely essential in a setup this size with five operators.”

The 2017 Eurovision Song contest telecast was directed by Ladislaus Kiraly for host broadcaster National Public Broadcasting Company of Ukraine (UA:PBC) and is produced by the European Broadcasting Union (EBU). 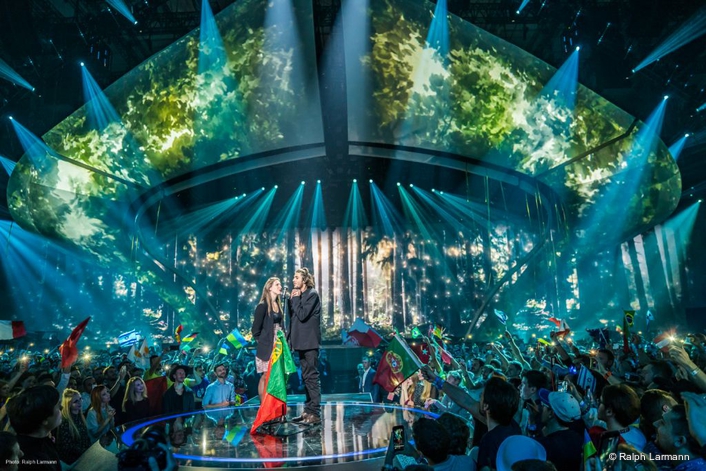 It was won by Portugal’s Salvador Sobral with the song “Amar pelos dois” (Loving for the Both of Us), who returned home a national hero, marking Portugal’s first ever victory or placing in 53 years of Eurovision participation!

PRG Germany was the event’s main lighting and video equipment contractor. On the lighting side, they agreed a collaboration with production rental specialist Litecom from Denmark who provided the MA Lighting grandMA2 control hardware and data networking infrastructure.