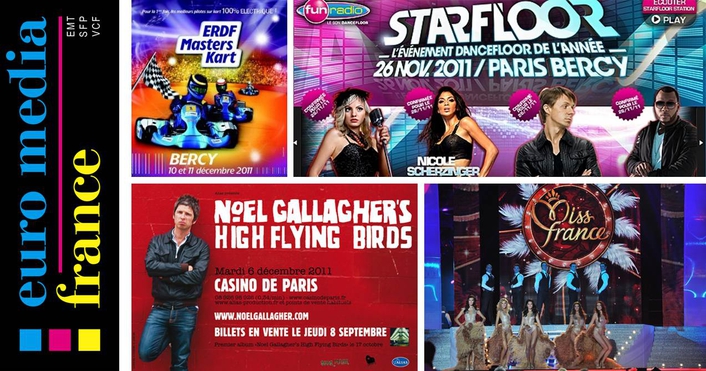 StarFloor : Bercy transformed into a huge dance floor
On Saturday 26th November 2011, the Palais Omnisport de Paris Bercy got made-over into one huge dance floor! Following the overwhelming success of M6 and Fun radio at the first two such events, the adventure continued in 2011 to the thrill of some 17,000 aficionados of burning dance floors.

Euro Media France has already covered this gigantic show last year, hosted by some of the greatest stars and DJs in the world. Produced by Laurent Brun this year with XL1 OB Truck and 12 cameras, the event was broadcast live on W9.

EMF in pole position for the ERDF Kart Masters
Started in 1993 in Bercy, indoor Kart racing will entered history on Saturday 10th and Sunday 11th of December 2011. This time, history was made electrically, as the sports competition got ready for an unusual demo, its first 100% electric competition. The ERDF Kart Masters once again were slotted for the season’s finale, a pole position for both pilots and motorsports fans.

EMF mobilised its XL1 OB Truck and 16 HD cameras including a crane and an HF camera for live coverage of the event on Eurosport and Motors TV. For the first time ever, this year’s competition featured on-board HF and HD cameras mounted on the Karts. The whole broadcast was transmitted by streaming on the Dailymotion site.

An astonishing retrospective over the history of the Bercy Masters indoor Kart racing event reveals the greatest names in racing, including Prost, Senna and Schumacher. And Bercy has done more: some of the stars of F1 competition today were first hosted there, proving yet again that Kart racing is an integral part of the seeding rounds. 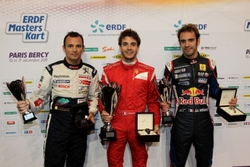 « It is truly something to see how the junior pilots, only 13/14 years old at the time, had such names as Fernando Alonso, Lewis Hamilton or Sebastian Vettel, the champion of the last competition in 2001 and today the defending world F1 champion. Just as the international stars of other big motorsports events have done, I invite them to return today to the site of their early glory » Philippe Streiff announced, as the organiser of the event.

At Bercy, the ERDF Kart Masters once again featured that special connection between the public and its champions, with 12,000 spectators at the event and TV viewers everywhere in the world, competing on a track specially designed by Colas out of recycled and recyclable materials.

Miss France 2012 contest
Saturday 3 December, XXL2 OB Truck of Euro Media France drove to Brest exhibition centre for the live airing of the “Miss France 2012” contest, hosted by Jean-Pierre Foucault on TF1. Produced by Franck Broqua for Endemol, this show required the placement of 13 cameras, 3 « junior » mobile vans and 1 crane to provide the visual coverage of the new ambassadress of beauty and French elegance. 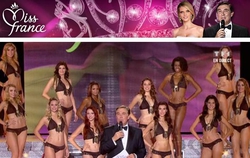 Miss France 2012 was selected by the television viewers, the sole authorities deciding on the fate of the 5 finalists. Way beyond other audience ratings (the vote was followed by 7.7 million spectators, for a total audience share of 35.9% of total viewers), garnering an increase of 800,000 in the number of viewers in comparison to the previous year.

By the end of the show over 9 million spectators were brought together in front of their screens to witness the coronation of Delphine Wespiser. The young Alsace beauty became the 65th Beauty Queen to win the prize.

Noël Gallagher’s private concert
This December, Euro Media France was contracted to produce the private concert of Noel Gallagher, the former guitarist for the legendary rock band Oasis, to air on Canal+. 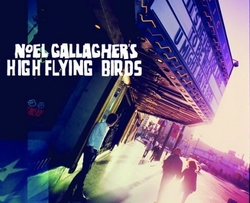 On behalf of its client, Séquence, Euro Media France worked with a ‘Fly’ 7-camera live shoot for the show at the Casino de Paris.

The Producer Don Kent was thus able to make an exceptional shoot of the concert of his new group, Noel Gallagher's High Flying Birds, of which he is a band member, in addition to the former pianist for Oasis Mark Rowe, the drummer Jeremy Stacey of The Lemon Trees and the percussionist and bassist Lenny Castro.