ESC 2013 - What a Show! Artists Relied on Sennheiser Mics and In-Ears 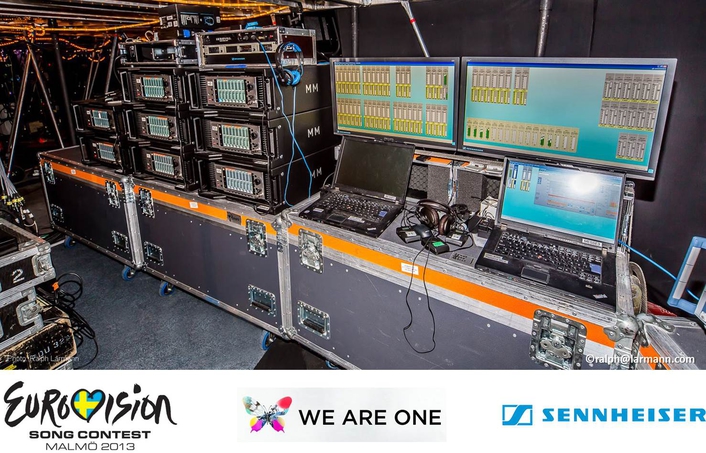 The workplace of Frans Ebbesson and Jonas Næsby accommodated the Digital 9000 microphone receivers
This year’s Eurovision Song Contest (ESC) saw the host broadcaster and production team create a spectacular and joyous festival of songs and unique performances to delight an audience of over 100 million viewers. From the Olympic-style flag-waving entry of the 26 finalists into the arena – via a bridge that was lowered over the auditorium – to the hilarious Stockholm tour given by spoof “Official EBU Host” Lynda Woodruff: the programme on 18 May was varied and captivating. A star turn was provided by actress and comedienne Petra Mede, who hosted the contest and also performed as a singer and dancer. Both she and the artists relied on Sennheiser Digital 9000 microphones and 2000 Series in-ear monitors for the show.

Host city Malmö gave a warm and sunny welcome to Eurovision: ESC posters, banners, and T-shirts emblazoned with the butterfly logo and the “We are one” slogan were everywhere. Those not lucky enough to get a ticket for the shows or the rehearsals could visit an open-air stage in Malmö’s city centre, where the ESC artists fitted in live performances of their songs into their tight rehearsal schedule. 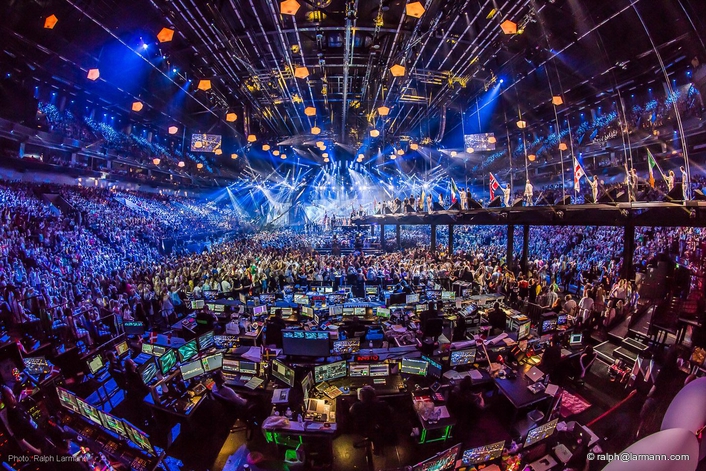 With a 57-year history, the Eurovision Song Contest is the world’s most-watched non-sporting event and this year was broadcast live into 44 countries – as far as Eurovision-mad Australia! 11,000 spectators had secured themselves tickets to the final, enjoying the exuberant party atmosphere and the powerful live sound in the Malmö Arena. The audience helped make the show – becoming an integral part of it when their LED bracelets turned the auditorium into a sea of little lights or lit up to create the national colours of the next artist to enter the stage. 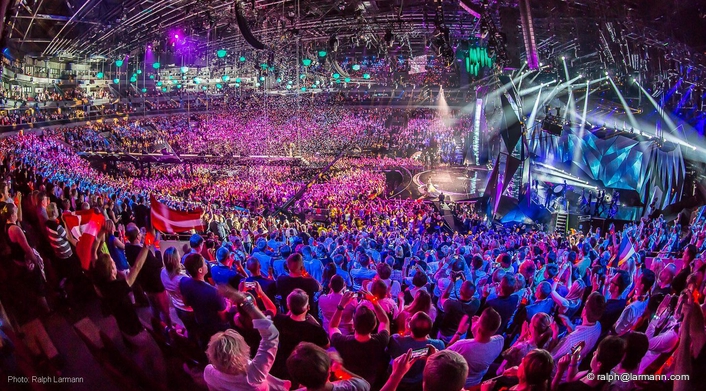 The exuberant atmosphere in Malmö Arena. The 2013 ESC didn’t use LED walls but focused on projection and moving lights instead

Wireless microphones and in-ears
Capturing the sounds and atmosphere of the Eurovision Song Contest on-stage and off is an impressive operation. The 58th edition used 96 microphone channels of Sennheiser’s top-of-the-range 9000 Series, plus 28 wireless monitoring channels of the 2000 IEM Series with a total of 160 bodypack receivers. 150 frequencies were coordinated for the microphone and monitoring requirements in Malmö Arena and the ESC press centre. 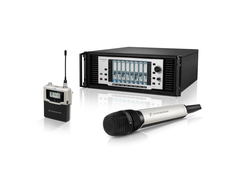 Wired Sennheiser MKH 416 shotgun microphones were used to capture the atmosphere in the auditorium and the Green Room, where artists and delegation members waited for the voting results.

Quality audio
Oskar Johansson, Head of Sound, commented on the sound quality of the Digital 9000 microphone systems: “The RF quality is astonishing, not a glitch! The almost zero intermodulation makes it really easy to set up channel plans, just find a free frequency and use it! We had the best support from Jonas and his team and felt really safe with the whole set-up.”

RF specialist Jonas Naesby of Sennheiser Nordic supported the show on site. For four weeks, “stage left” was his workplace, which he shared with Frans Ebbesson, Mic #1 of the production team. They were responsible for monitoring and patching the microphone signals as well as for scanning the RF environment for potential outside interference.

Although 2013 didn’t feature the LED walls that have been used at past years’ contests, the show was by no means less spectacular or colourful. But for the RF wireless side, this meant a welcome reduction in interference. Says Jonas Næsby: “The challenges encountered inside Malmö Arena were mainly due to its metal construction and due to the sum of all equipment operated in the hall, from HDMI converters to cameras, all of which laid a wideband noise over the entire arena. Other local interference spikes made approx. 50 MHz of spectrum unusable. However, the high selectivity and automatic calibration of the Digital 9000 antennas made set-up much easier than with conventional systems.”

“A further challenge for frequency coordination were the TV towers,” adds Frans Ebbesson. “We not only had to plan with the Swedish channels but also the Danish ones – there’s just 30 kilometres of sea between Malmö and Copenhagen. It helped a lot that the Digital 9000 system does not require any calculation of intermodulation frequencies. The system is linear and does not generate these frequencies, so we could simply fit the mics into the allocated spectrum. That was very efficient. We split the microphone system into three different frequency bands, B2, B4 and B7.”

He continues: “I was really impressed with the reliability of the transmission. With a transmitter inside the arena it would have taken a Faraday cage to get an RF dropout! I’ve done several shows that were of a similar venue size and RF environment that simply did not work out as well as the 9000 system did for the ESC.”

Jonas Næsby: “As always with this type of event, we spent a lot of time in locating unauthorised users of wireless microphones. We made sure that all members of the press bringing video cameras to the Eurovision got clear instructions that they must not use wireless equipment and could lose their accreditation if they did. There were posters with the same message all over the arena and press centre. But still we caught several unauthorised ENG teams every day, who potentially could have interfered with either the rehearsals or the TV broadcasts. Luckily we managed to locate and stop them before they could cause any serious interference.”

Soundcheck Room
The Soundcheck Room has been a key innovation in recent years by the ESC and proved very helpful once more in 2013. Here, artists had enough time to try out and fine-tune their in-ears so that only minute changes were required to get the optimum settings on stage. Jonas Næsby: “We had a set-up with the same equipment as used on the main stage, 2000 Series IEMs and Digital 9000 mics. The separate room allowed the sound team to carry out a very personalised set-up. In most cases, the IEM sound was already perfect when the artists left the Soundcheck Room, so they could concentrate fully on the stage, the camera angles, their choreography…” 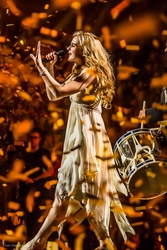 The SR 2050 IEM transmitters and A 5000-CP antennas were located directly at the monitor position. Jonas Næsby: “Thus the transmitters could ‘shoot’ at the gate to the backstage area, and immediately gave the artists the confidence that everything was fine when they got ready for the stage.”

Next year, next door
In 2014, the contest will move to Sweden’s next-door neighbours: in a thrilling voting finale, Emmelie de Forest from Denmark won with Only Teardrops, beating Farid Mammadov (Hold Me) for Azerbaijan into second and Ukraine’s Zlata Ognevich (Gravity) into third place. For the Danish singer, who has been performing since the age of 14, it was a start-to-finish victory: After winning the national finals through the audience vote, the 20-year old garnered the highest number of points in the first semi-final, and won the grand finale with a total of 281 points. Her song is at No. 1 in the Danish charts, and since the national final she has signed a record contract and published her first solo album. Like Eurovision, this Danish fairytale will continue…