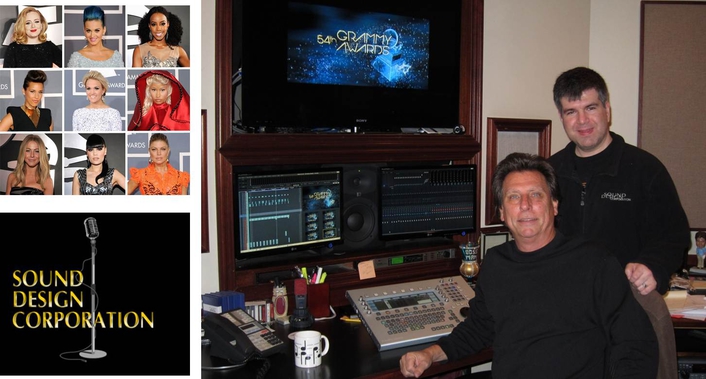 Paul Sandweiss and Kristian Pedregon of Sound Design
Anticipation, suspense and recognition are essential to the production of awards shows, so it is no surprise that the GRAMMY Awards also deliver entertainment to its audience with a highlight reel of nominees before honoring the winner. Sound Design Corporation, Hollywood’s premier post-production audio facility, turns to Fairlight’s Xynergi consoles when developing ‘edge of your seat’ digital material for the GRAMMY’s.

Sound Design’s President, Paul Sandweiss, a voting member of NARAS (The National Academy of Recording Arts and Sciences) has been working with the GRAMMY’s since the late 1970’s, offering his expertise and knowledge of sound production to make sure that the show runs smoothly as well as provide viewers and nominees with thrilling anticipation before the winner is announced.

“It’s an honor to be apart of the industries most prestigious live music award show,” says Sandweiss. The GRAMMY’s, which is typically a three hour music award show, has anywhere from 10-20 awards with four to six nominees per category. Sandweiss and his team are responsible for creating the sound of the clip packages that highlight the nominee’s efforts, as well as any other video packages that roll in the show. “Once the packages have been edited, we have the task of recording the announce copy, blending, mixing, and sound designing any transitions, as well as the overall mixed sound of the packages.”

The process from start to finish can be tricky, especially as changes are made on the fly and different awards and presenters are added or dropped. However, with the Xynergi console, Sandweiss says the workflow is easily manageable. “Once we are done with our final mix, we use the Xynergi controller to control the HDCam recorder, where we marry our mix with the final picture. The final mix is layed back as two stereo stems. One stem is the final mix minus the announcer, and the other stem is the announcer, so the front of house and monitor mixers can build their own mix regardless of our broadcast mix. That way everyone has control of the sound elements they need for their audience, be it performers, audiences in the live venue, or those at home watching the broadcast live on TV.”

Sound Design Corporation is also responsible for mixing the in memoriam package, a showcase of renowned members of the music community who have passed away over the last year. “This can be quite difficult,” Sandweiss says. “As seen this year, we have to be ready to update the packages as devastating events happen so close to the show. This is never a highlight of the job but the Xynergi helps to make the update seamless.”

One aspect of the Xynergi and Fairlight is the ability to save everything. This proves to be useful in situations when Sandweiss can pull up a template from the previous year and look at the settings that were used. “I always keep notes, sometimes different producers like certain techniques, having that knowledge helps to make the process easier the next time around.” Fairlight’s ability to import different file types without the need for external plug-ins eliminates difficulties in opening past projects or dealing with new ones.

There are strict time limits for each project, and more so with a show as big as the GRAMMY’s where everything is closely watched. “There’s no need for any external devices, all the plug-ins including reverb are all there with the push of a button. It saves us a lot of time with no need to flip through menus and pages to find what you’re looking for,” Sandweiss explained.

With the Xynergi’s ability to interpret a variety of file extensions, it makes the sending and receiving of audio and video straightforward. “We can import and export our audio and video in a variety of formats which makes interaction with picture post houses easy, and quick. From there we can easily send it to be reviewed and are able to work alongside the other members involved, a difficult process if you aren’t using Fairlight,” Sandweiss mentioned.

“Our main challenge is time,” Sandweiss stated. “It’s called television for a reason, emphasis on vision. If there is a certain amount of time allocated for video, the audio cannot be added until that is established. Fairlight and the Xynergi make it easy to view everything together and enables me to track the changes as they occur.”

Sandweiss and his team have been in the industry for over a decade, and continually strive to advance through creativity, “Fairlight understands my job and how to make it easier. I couldn’t imagine my work without it.”