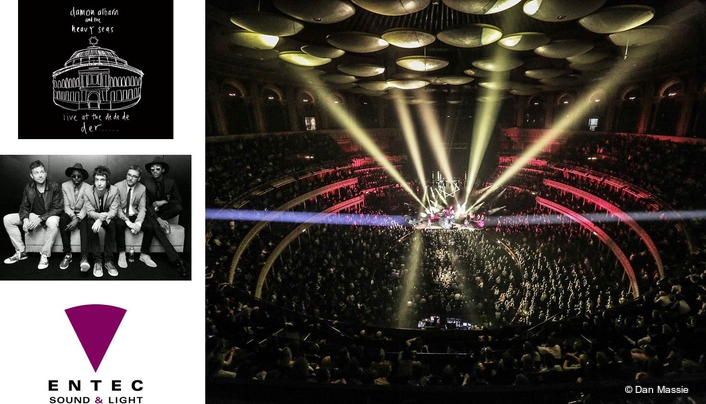 .
West London based rental and technical solutions specialists Entec Sound & Light has enjoyed a remarkable and dynamic working relationship with singer, songwriter, producer and composer Damon Albarn and Blur, which stretches back about 23 years, almost as long as the 24 years that Lighting Designer Dave Byars has worked with Albarn on his many and varied live performance projects.

Lighting
Over the years, Dave Byars has been tasked with realizing the vision of musicians and artists in a plethora of venues ranging from tiny local clubs to stadiums around the world. His design for Albarn’s 2014 tour and the RAH shows included a heptegram - seven pointed star - backdrop, a symbol of particular interest to Albarn. Entec had in fact provided three touring sizes of the drop so there was always one handy for every size of venue or stage they were playing leading up to these RAH dates.

For the Royal Albert Hall, Byars’ trussing design was based on a virtual 7-point star shape which he drew ‘above’ the stage and used as a structural outline.

Once his initial renderings of the star and the resulting placement of trusses was established, a further parameter was added, which was that only multiples of seven lightsources should be active at any one time throughout the set.

Another element of the creative brief was to keep the look intimate and simple reflecting the personal nature of Damon’s 2014 debut solo album Everyday Robots, whilst simultaneously, highlighting some of the Royal Albert Hall’s fabulous architecture.

The venue is a vast space with a massive ceiling height, so the key was reflecting the solitude of Albarn onstage in the huge void … whilst also making him feel within reaching distance of his audience.

Byars’ solution to close down the space was to concentrate much of the lighting on the floor, a challenge in itself due to an extraordinary amount of performers and special guests - including Graham Coxon, De La Soul, grime rapper Kano, Brian Eno and Malian musicians Afel Bocoum and Madou Diabaté – plus two choirs and a strings section. Onstage real estate was at a premium!“

This all galvanised me, but it was a great brief,” declares Byars with a combative sparkle in his eyes! “Working with Damon there is never a dull moment, and I love achieving these goals!” 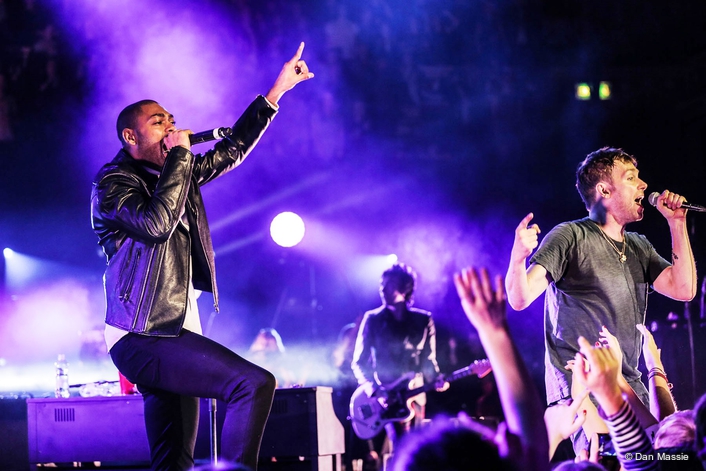 Equally important – after the low key numbers was to rock-out with the lighting and show off the venue during the large up-tempo songs. The lighting rig was also designed to fit sympathetically into the distinctive and idiosyncratic stage space.

The choir stalls seats overlooking the stage at the back were sold, so the rig was flown high to ensure everyone sitting there had a clear view and equally good sightlines to the stage.

Byars and the Entec crew started work on site by blacking out the venue’s organ and flying their own backdrop – produced by Rock Drops - in front, which worked perfectly.

The multiple trussing pieces were then flown and angled relative to the original virtual 7-point star with four 16ft upstage trusses providing the rear lighting positions and also sub-hung with lights at different angles.

Overstage in the middle position were two trusses, one above the other, connected by a series of 3 metre trusses at different angles, as dictated by the co-ordinates of the ‘star’.

The front truss was a 34ft straight run, loaded with eight Clay Paky QWO 800 profiles for key lights - four used for general white key light, and four for the choir and strings - and 18 x CP Sharpy Washes used for the front and forestage.

The four mid trusses were rigged with a mix of three QWO 800s and an A.leda B-Eye K20 on each, with a total 12 Sharpies distributed on the mid and upstage sections. These fixtures were used for back washing the performance area and for specials.

The floor based sections of the rig started with the rear stage ‘shelves’ behind the choir stalls each of which was rigged with six QWOs, six Sharpies and two B-Eyes.

Onstage there were 12 different height trussing towers in an arc, again positioned in relation to the pointes of the ‘star’. Across (all 12 sections) were ten B-Eyes, six QWOs, six Sharpies, eight Martin Atomic strobes and 11 x Robe LEDWash 600s for the basic low level stage wash. 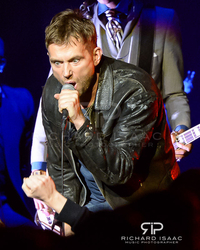 Byars used his own Avolites Sapphire Touch console to run all the lighting, and utilised the in-house follow spots away up in the ‘gods’.

Time was a major issue to produce a complex show like this. The morning get-in was followed by the first show the same evening, and before then, Byars did some serious  WYSIWYG’ing  at home – whilst the rig was constantly evolving.

The week before the shows he had only two days of visualisation and a further two days sitting in on band rehearsals (with no lights) as they finalised the set.

Crew wise, he was reunited with ‘partner-in-crime’ Andy Emmerson, another Entec regular who came onboard as Crew Chief for these shows “He was absolutely amazing,” states Byars.

Entec’s Will Wright, Amir Riaz and Leo Tierney joined the team on the ground at the RAH, and the account was co-project managed for Entec by the ever radiant team of Noreen O’Riordan and Adam Stevenson.

Byars sums up, “It was a great honour to be part of this – it was a really magical and special show for everyone – band, crew, audience - and the results all round were spectacular!”

Hayes’ relationship with Damon Albarn goes back to 1994 and Blur’s gig at Mile End Stadium. Damon / Blur’s long term FOH Engineer Matt Butcher also kicked off his professional sound career at Entec … initially as a warehouse assistant, and so another great example of that fabulous synergy between people and business in this industry which has flourished over the years.

Butcher – like Byars – is also known for his invention, creative originality and ability to think ‘out-of-the-box’.

Installed in the RAH for the occasion was a trusty d&b system originally designed by Liam Halpin for the annual Teenage Cancer Trust event circa 2000. That started with the d&b C4 which was the most current product at the time and has since morphed into using combinations of the different line array options to cover the main parts of the venue. A careful selection of point-source boxes are utilised for near-fill and choir stalls coverage.

Entec’s crew were led by James ‘Kedge’ Kerridge on site – who also looked after the Entec control / monitor package supplied for rehearsals and the warm-up show in Paris immediately beforehand.

Entec installed their own trussing grid on the RAH house motors which gave under-hang positions for the left-and-right main and side hangs. This time around, 14 x d&b J8 speakers per side made up the main arrays with eight of the new Y-Series Y8s for the sides. A single C4 cabinet each side ‘hot-spotted’ the sides of the upper circle.

A centre drop of eight J-SUBS were dead hung from the Entec grid, while the choir stalls were covered with two Y7s and a single Y10 per side. The front fills comprised a Y7 and a Y10 on top of two Y-SUBs per side, together with a Y7 and a Y-SUB at the top of the stairs (immediately beside the stage). d&b D12 amplifiers were used throughout. 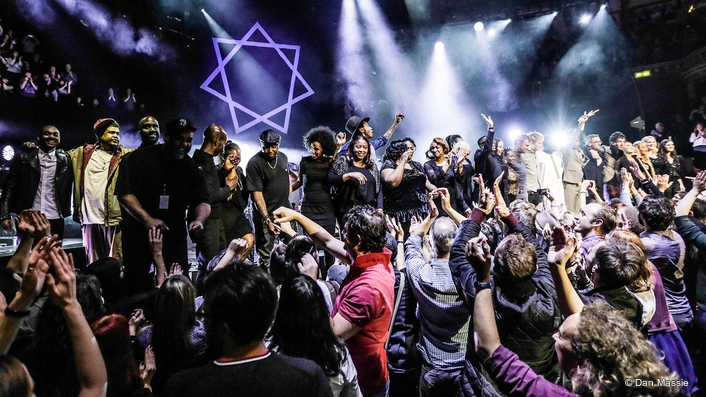 The production systems tech for this show was Richard ‘Basil’ Ferneley and he fined tuned everything to Butcher’s precise requirements and taste.

Both Butcher and Monitor Engineer Dave Guerin spec’d DiGiCo SD10 consoles and shared a set of DiGiCo stage racks which were used for processing, EQ and system control.

Butcher added his own custom ‘Ladyboy’ device and a couple of EL8X distressors as outboards to his set up at FOH.

On this show, the monitors were 22 x d&b M4 floor wedges, positioned all over the stage, a C7-SUB for the drums and three E8s around the keyboards. Entec supplied four channels of Sennheiser G2 IEMs for the drummer, guests and two tech mixes as part of a comprehensive comms system.

The band carried their own Shure P6HW hard-wired IEMs for the strings, along with a comprehensive Shure mic package which was augmented with a further four channels of Shure hand-held radios from Entec.

It’s a difficult venue to cover in terms of audio and also entails a massive amount of walking around – so Entec’s very fit crew – in addition to the aforementioned Kedge and Ferneley – were joined by PA tech’s Lee Furnell, Jack Dunnett, Luke Turnbull, Stewart Filbey and Tom Olorenshaw.

Dick Hayes concludes. “It’s been a huge pleasure working with Damon and Blur’s numerous projects over the years. He always has something new on the horizon – I would say a bit of a ‘Musaholic’ actually – which is all great for Entec!”