Currently touring in the USA to promote her second album, Halcyon, Goulding is now using the a wireless version of the d:facto Vocal Microphone for all of her concerts.
Goulding’s Front of House sound engineer Oz Bagnall and monitor engineer James Neale were introduced to the d:facto Vocal Microphone by Dave Kay at Adlib Audio. He recommended it as an ideal replacement for the hardwired microphone she had been using on her previous European tour. DPA’s UK distributor Sound Network was able to arrange a demo just prior to the Chime for Change concert, and Bagnall and Neale were so impressed by its performance that they bought one.

We both felt it was the best microphone for Ellie,” James Neale says.  “She is really happy with it and is now using it for all her live performances.”

Oz Bagnall adds: “During Ellie’s European tour we struggled with level and ambient spill on her vocal, so we used a mic that was discontinued several years ago and was only available as a hardwired version. From that point our search was on to find a modern microphone with similar rejection but hopefully with better quality sound. We tried out a lot of different microphones before demoing the DPA d:facto Vocal Microphone. Apart from sounding amazing, it was the only microphone that was able to deliver what we wanted in terms of rejection, plus it allowed us to go back to a wireless system which gives Ellie much more scope to move on stage.” 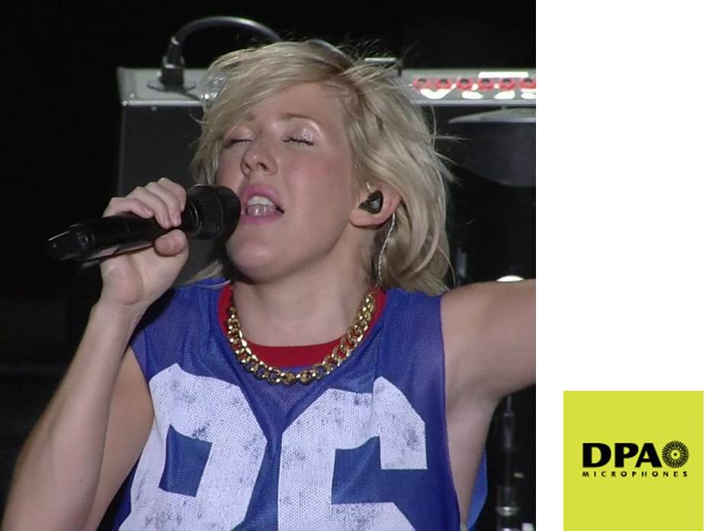 Goulding’s first proper try out with the DPA d:facto Vocal Microphone came at the Chime For Change concert, which also featured artists such as Beyoncé, Jennifer Lopez, Jessie J, Rita Ora and Florence and the Machine. The microphone was supplied via Adlib Audio by DPA’s UK distributor Sound Network.

“During the first sound check Ellie did find the change in tonality a little disconcerting because she wasn’t used to it, but we persuaded her to use it for the show and in the end she was very happy with the result,” Oz Bagnall says. “At FOH, the microphone was a huge success as I had all the level I needed and much improved audio quality and clarity. I especially like its flat response and virtually no low end proximity effect.”

Oz Bagnall demoed the DPA d:facto Vocal Microphone with a Shure wireless system, but he is now using it with his existing Sennheiser system.

He says: “At Chime for Change our slot in the concert program put us on the side stage so that the main stage could be reset for Beyoncé. This meant that Ellie was in front of and in between the SL main and side PA hangs, which from a sound quality perspective is not an ideal position. However, thanks to the DPA d:facto Vocal Microphone, the sound we got in the stadium was great. I was so pleased that we were able to take delivery of the wireless version of the d:facto before Chime for Change – and very grateful for the help Sound Network and Adlib Audio gave us.”