Elisa Soars Somewhere Between Dreams and Reality with Clay Paky 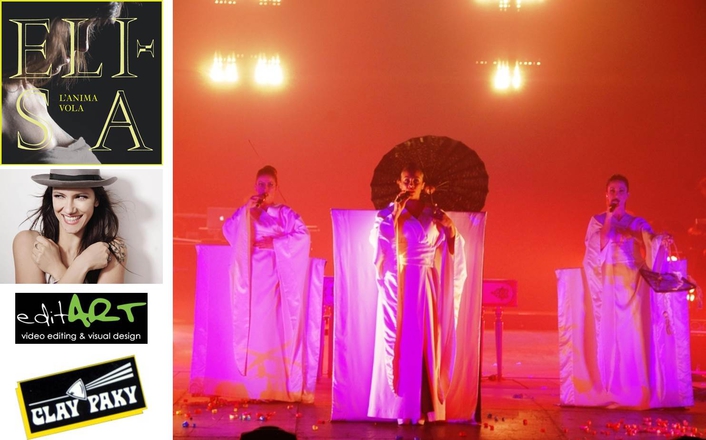 .
Elisa's "L’anima vola" (my soul flies) tour is a three-hour-plus marathon, during which the Italian singer-songwriter entertains her audience with the naturalness she has got us used to. It is a sort of long journey that covers all stages of her career, from her début in English and her victory at the Sanremo Music Festival, right up to her total conversion to the Italian language, which features throughout her latest CD.

Elisa is one of the few artists who love to supervise the whole design and creative process involved in artistic/musical projects. She came up with the original tour concept and then handed it over to a well-established creative team, consisting of lighting and show designer Mamo Pozzoli, set designer Igor Ronchese, and artistic director Mauro Simionato, with Edit Art in charge of the visual art. 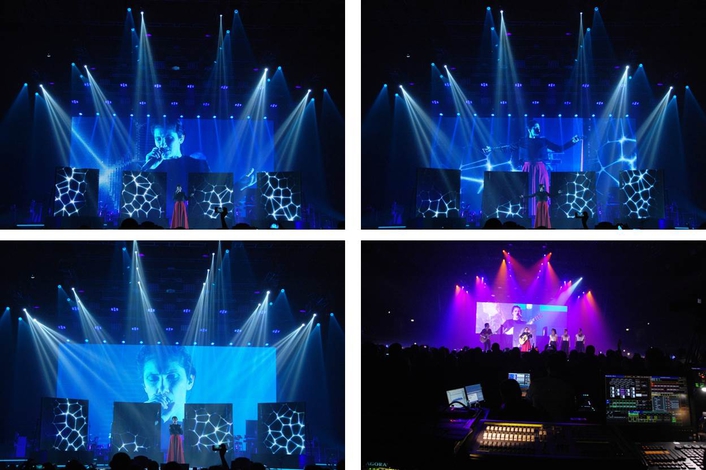 The stage looks deceptively simple and uncluttered. It is a big double sided "E", which symbolizes the artist's name. This "E" is repeated on the backlit backdrop and in the shape of the stage, which protrudes for a few dozen metres into the centre of the various sites that host the tour. 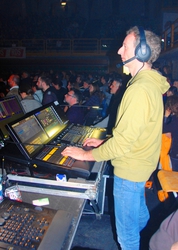 However, behind this apparent simplicity, there is a hidden secret. After the first half-hour of the concert, the backdrop comes down and a huge LED wall appears, on which live visual animations are broadcast with a creative dynamic overlay effect. But this is just the beginning! The screen is then slowly broken up, and entire portions of it, which still work, are blithely detached and carried around on the stage by the production staff!

Everything continues to work thanks to powerful batteries inside the unhooked LED wall panels, and a Wi-Fi signal that transmits the remote instructions.
As if that were not enough, Elisa amuses herself by making the musical instruments appear and disappear in the middle and at the back of the stage thanks to a system of lifts, thus gradually changing the focal point of the show. All this is done to create a show that evolves song after song in an almost theatrical crescendo.

Lighting designer Mamo Pozzoli began by saying: "In this mix of creativity and technology, the lights serve to provide order. I use them in a rigid geometric way that is completely functional to the rest of the scene. But this does not mean their role is belittled. On the contrary, precisely owing to their essential function in the overall set-up, I immediately asked for some of the most reliable lights I know: Clay Paky Alpha Beam 700s, Clay Paky Alpha Wash 700s and Sharpys.”

"However I needed some 1500s as filler lights that I could also use as beam shapers, and I was undecided between the various makes. I did a bit of field research, and after seeing the Alpha Profile 1500 in action in the Clay Paky showroom, I had no more doubts."
The lighting rig was therefore complete: 24 Alpha Profile 1500s, 12 Alpha Beam 700s, 12 Alpha Wash 700s, and 16 Sharpys, together with 21 Jarags and 12 Elidy-Bigs from the French company Cromlech, all provided by Agorà. 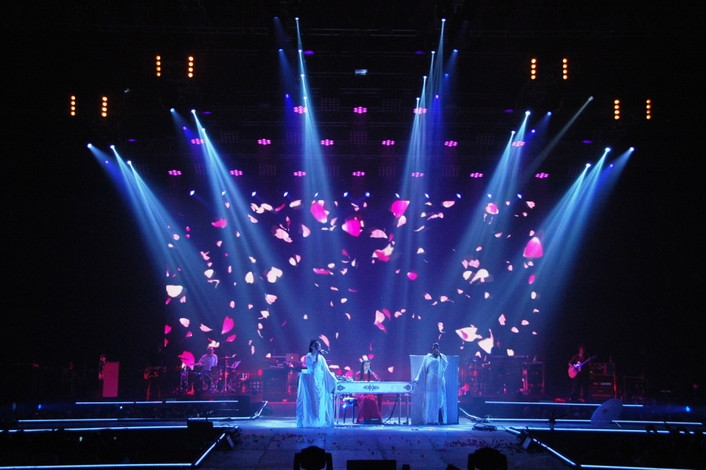 "Clay Paky lights allowed me to illuminate without occupying a lot of space. Owing to their size and - especially - their huge light output, I could limit the number of hanging lights needed to cover the scene perfectly."

Mamo then went into more detail on how he used them: "They mainly work as fixed lights. The Beam and Wash 700s mark out the perimeter of the 'E' which protrudes towards the audience, and the Profiles are installed in the corners. With the Profiles, I can open up to 60°. In this way, I can illuminate the audience without dazzling them, as Elisa wanted. The Sharpys generate 'downpour lighting' situations on stage and are hung on three concatenated longitudinal truss structures, which are rather unusual for a tour. The Washes have deep saturated colours, which I use a lot for the more dreamy pieces. The backlighting is limited to Jarags, but they never point into faces. I also use them as effect lights." 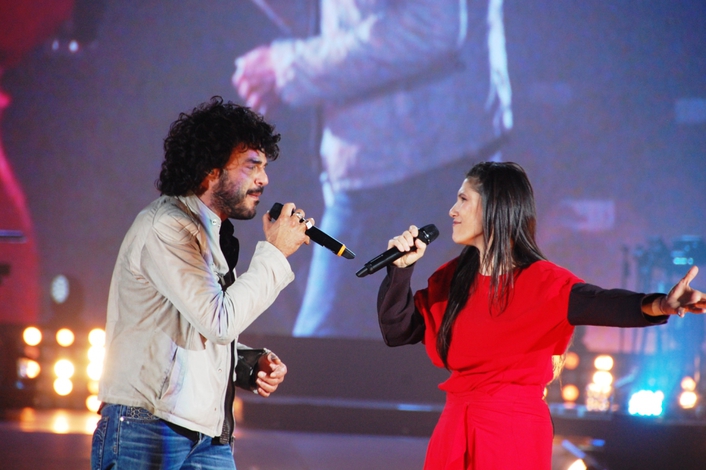 There are twelve Elidy-Bigs on the back of the LED wall. They are used for transparent effects while the LED wall is dismantled. They are located exactly in the spaces left empty by the extracted LED wall panels and work (at 20% power) with the same graphical mapping as the LED wall itself. "Of course,” Mamo Pozzoli explained, "the picture is much poorer, but you can visually perceive the continuity with the high-definition animation on the LED wall. I think it is a truly original composition of visual graphics and light." 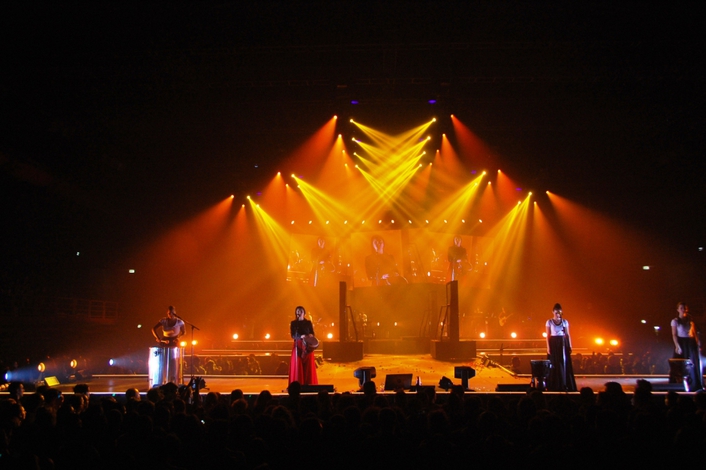 Even the finest details of the set have been taken care of, with hours and hours of tests and synchronization between the different operators involved. Behind apparent moderation and sleekness, the stage concept hides a highly technological soul, full of surprises… just like the all-round artist Elisa. Behind the simplicity of her ways, she hides a rare ability to thrill. She sings perfectly in two languages, has a wealth of musical knowledge, and is a truly top-ranking Italian singer-songwriter.
After fifteen dates in March, Elisa's tour will resume in July, probably with new exciting surprises! 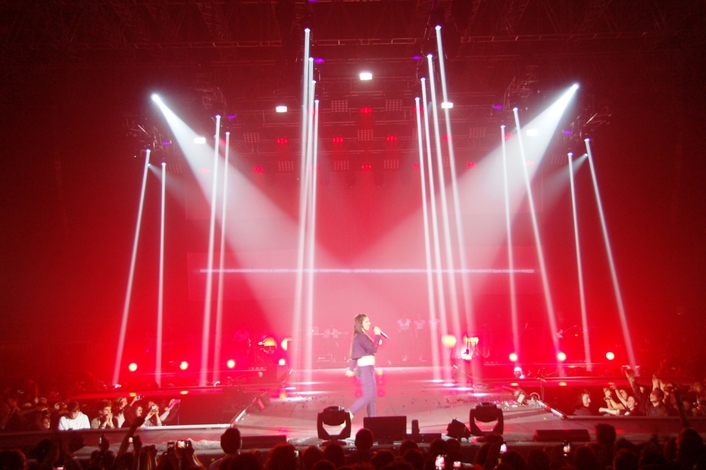 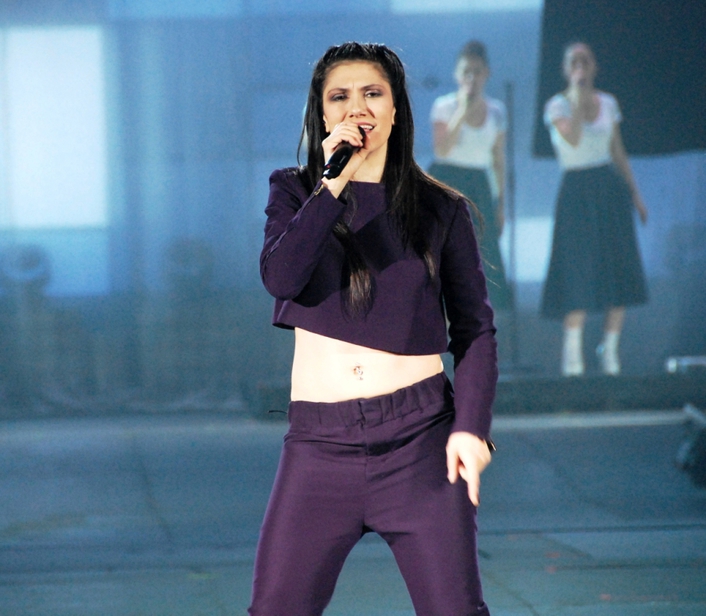