Electro-Voice Supplies the Sound for “Opera on Ice” 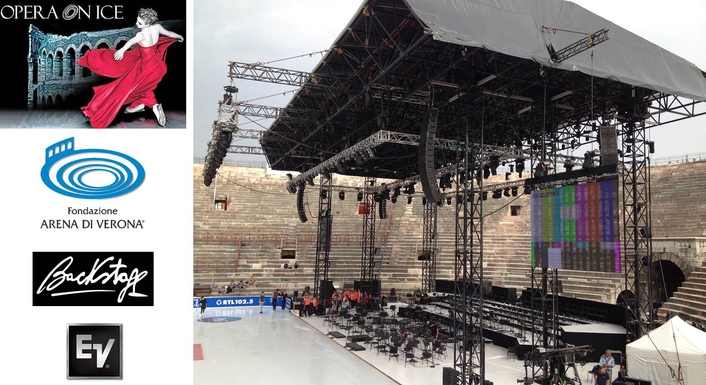 Electro-Voice systems provided the sound reinforcement for “Opera on Ice” in Verona’s historic amphitheater
Sporting excellence and the high art of opera presented in a historic setting – such is the concept of “Opera on Ice” in the Arena di Verona. 2013’s show had an audience of 12,000 and was also enthusiastically attended by numerous celebrities--including Princess Caroline of Monaco and her son Pierre Casiraghi. All experienced an ice revue featuring some of the world’s biggest ice-skating stars (including Carolina Kostner and Evgeni Plushenko) as well as high-class opera singers such as Vittorio Grigolo and Elisa Balbo.

The sound production for the event was the responsibility of Backstage PA, a company based in Mariano Comense just north of Milan. An exciting task, for the 2,000-year-old amphitheater – the third largest such arena in the world – offers the ideal architectural conditions for evenly dispersed frontal sound reinforcement. In addition to obtaining the right coverage pattern and the high sound pressure levels and differentiated frequency response required, compactness was a key criterion in the choice of loudspeakers. This was because Italian TV’s Canale 5 was recording the entire show for transmission on December 25, 2013. “We wanted television viewers to see as little as possible of the enclosures, so they could not afford to be too large,” says Pino die Constanzo, the managing director of Backstage PA. For this reason, the client stipulated that the system must be powerful and yet compact.

Di Constanzo and his team opted therefore for systems from Electro-Voice. To find a solution capable of delivering homogeneous and yet discreet coverage, Backstage PA conducted exhaustive simulations in the historic amphitheater. The best solution, it emerged, was to divide the area to be covered into two zones. The main PA comprised two hangs of 16 Electro-Voice XLD line-array elements. Two additional hangs of 12 XLD enclosures each provided sidefill to round off the acoustic provision for the audience area. 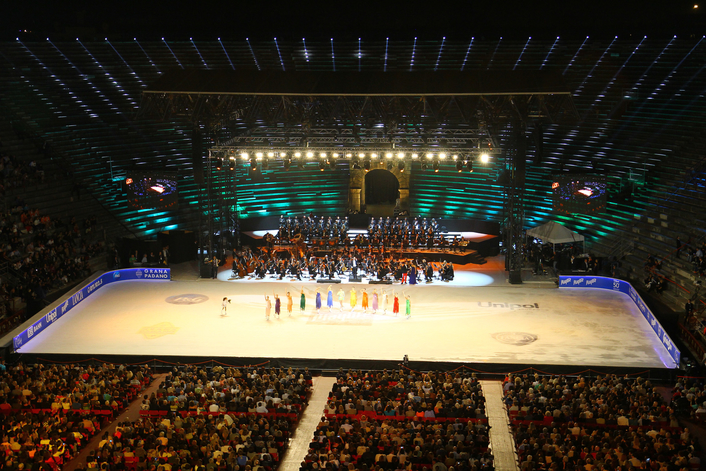 After the show, Pino di Constanzo expressed himself highly satisfied with the choices he and his team had made. “The system operated flawlessly and exactly as we had envisioned,” he said. The sound specialist from northern Italy was particular taken with a number of details of the setup. “The factory presets supplied as standard with the controllers and the FIR filters for the XLDs, which we were able to download free of charge for IRIS-Net, made our work considerably easier. These are sensible and extremely useful features.” With a prestige event such as “Opera on Ice”, the expectations of everyone involved are extremely high. For this reason, di Constanzo was particularly gratified by the positive feedback he received in the immediate aftermath of the gala. “Fabio Mastrangelo, the conductor of the 200-strong choir and orchestra, made a point of praising our work,” recalls di Constanzo. Riccardo Barbaglios of Canale 5 also expressed his appreciation of the work of the Backstage PA team. “I would like to thank the team from Backstage for selecting such unobtrusive and yet powerful enclosures,” he said. “That made it possible for me to illuminate the stage in an ideal manner.” Even the arena’s production manager, Paolo De Biasi, who was initially skeptical in view of the modest dimensions of the system, was immediately impressed by the performance of the Electro-Voice systems at the first rehearsal and intends from now on, according to di Constanzo, to rely on Electro-Voice sound reinforcement for similar events in the future.

About “Opera on Ice”
“Opera on Ice” is a figure-skating show that has been staged every year since 2011 in the amphitheater in Verona. It combines performances by some of the world’s finest ice skaters with high-quality opera music, with the international skating stars (among them Olympic gold medalists as well as world and European champions) accompanied by a choir and orchestra composed of around 200 musicians. The three performances of “Opera on Ice” proved so popular in Italy that there are plans now to repeat the success in other countries.

About the Arena di Verona
The amphitheater in the north Italian city of Verona was built in around 30 AD and is – after the Coliseum in Rome and the amphitheater in Capua – the third largest arena in the world surviving from classical times. Originally designed to accommodate 30,000 spectators, the arena was used in the Roman area, among other things, for gladiatorial contests. Since 1913, however, the building has served as a giant outdoor concert hall, which, due not only to its magnificent architecture but also to its first-class acoustics, is regarded as one of the finest venues for classical music in the world. 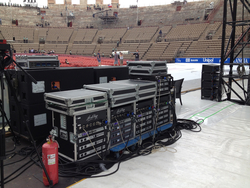 About Backstage PA
Founded in Mariano Comense near Milan in 1986, Backstage PA is one of Italy’s leading rental companies. Among the references of the company led by Pino di Costanzo and Daniele Mascheroni are TV productions (for RAI and Canale 5 among others), theatrical productions, conferences, radio broadcasts and events organized by record labels.