Electro-Voice at the Sonnenrot Festival 2010 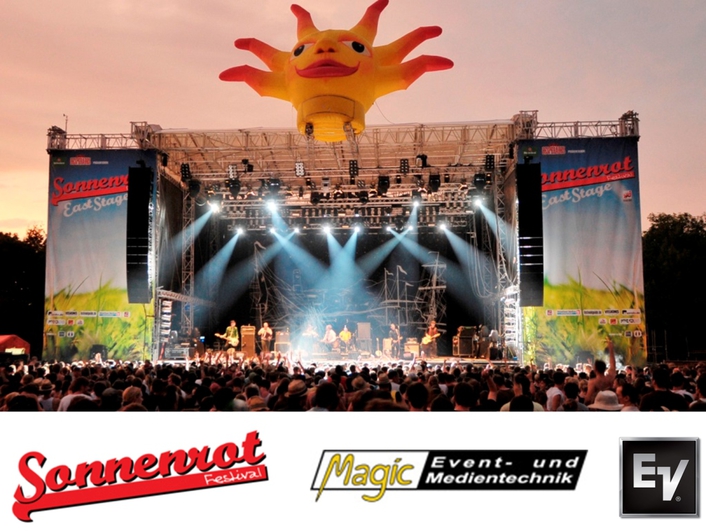 The ‘Sonnenrot’ Festival in Eching (near Munich) was held for just the second time this year, yet the event has already established an excellent reputation across Germany. Over 6,000 people attended on the Friday and 7,000 on the Saturday, drawn by a big-name line-up that included acts like Jan Delay, Maximo Park, 2Raumwohnung, Donuts, and Danko Jones. To spare festival-goers long pauses between acts, the organizers erected two stages for the occasion.

This year, the entire lighting and sound production for the festival was the responsibility of Olching-based rental company Magic Event- & Medientechnik. Long before the first act took to the stage, a team of sound engineers led by company MD Markus Thomae had already made the decision to rely upon sound reinforcement systems from Electro-Voice. “We’ve been relying on Electro-Voice for years now,” says Thomae, “for many reasons: the equipment is reliable, its audio performance is exceptional, the technology is flexible, and the devices are light and easy to operate.” The fact that Electro-Voice – despite its long tradition of innovation and quality – also delivers excellent value for money only made the young company’s investment decision easier. It was a decision Thomae has never regretted for one instant: “As well as the arguments already mentioned,” he says, “the service provided by Electro-Voice is also outstanding – an advantage never to be underestimated!”

At the ‘Sonnenrot’ Festival, the EV systems had to prove their extraordinary resilience once again, or, to be more precise, their weather-resistance: “Despite the name ‘Sonnenrot’ [‘Sonne’ means ‘sun’ in German], the eponymous hero of the piece this year failed to show up,” quipped Markus Thomae. “On Friday, the weather was simply appalling, with pouring rain, wind, and even lightning. Jan Delay had to stop midway through his set for safety reasons.” But, as Thomae is quick to point out, it was the safety of the audience--not the equipment--that was at risk. The wiring was fully weatherproof and the Electro-Voice PA system proved impervious to the heavy rain. In fact, Jan Delay’s front-of-house engineer was actually disappointed by the decision to interrupt the performance,” reports Thomae. “He said the sound was outstanding and that he was having a whale of time!”

Whereas whales are far happier with water than without, the source of the engineer’s satisfaction on this occasion was the exceptional sound at front-of-house position, for which he had an Electro-Voice XLC system to thank, comprising 2 x 3 XLC215 array elements, 2 x 3 XLC 907 DVX, and 2 x 9 XLC127. Eighteen Xsubs provided additional SPL in the low frequency range, and 14 x EV TG5 and 6 x EV TG7 amplifiers the requisite power. On the second stage, where acts including WhoMadeWho and Bonaparte left their musical visiting cards, Thomae’s team opted for a compact Electro-Voice XLD line-array system, with twelve XLD281 enclosures per side, on a foundation, again, of EV Xsubs (nine this time) driven by 10 x TG5 amps.

The IRIS-Net software platform and RCM-26 dual-channel digital control modules also played an important role in the production. The software made it easy for the sound crew to control and supervise the performance of the entire system via an easy-to-use interface. “This allowed us to continuously oversee the performance of each link in the signal chain, as well as intervene at any moment to tweak whatever parameters we liked,” explains Thomae. “Having that degree of control is extremely reassuring.”

By age 17, Markus Thomae knew exactly what career he wanted to pursue, and for the last 15 years he has been a specialist in ‘sound’. His enthusiasm has never waned. “This job is quite simply enormous fun,” says the 32-year-old boss of Magic Event- and Medientechnik. When you do a good job, your work is appreciated and people tell you so directly. What is more, you contribute importantly to the success of events that touch people on an emotional level.” It was in 2002 that Thomae decided to set up his own company, and for the last four years he has relied on equipment from Electro-Voice for most productions. A further plus, he points out, is that there’s a tremendous solidarity between EV users. “For really large-scale productions, we help each other out by chipping in with amps and enclosures. Since all the devices, besides being compatible, are highly robust, we can do so without misgivings.”