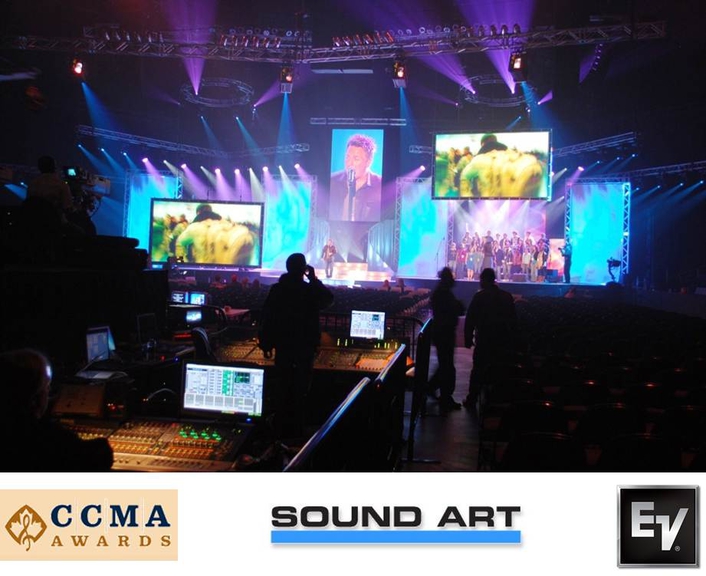 Achieving high-quality event sound is always an accomplishment, but it becomes more of a challenge as the complexities of the overall production increase. The recent Canadian Country Music Association awards show, for example, involved not simply a talent-packed roster of more than a dozen artists, but also the complication of a nationwide broadcast on CBC, making lighting a big priority for the show’s producers. And while audio was by no means marginalized, it was imperative that setup be fast and sightlines be unimpaired. An Electro-Voice sound reinforcement system, designed and provided by the Winnipeg office of leading Canadian event and installation company Sound Art, fit the bill on both counts.

“We’ve been an EV house for a long time,” says Sound Art technical projects manager Iain Graham. “Their gear is very reliable, and EV is consistently evolving their processing, so their speaker systems keep sounding better and better.” Graham designed the system in Electro-Voice’s Line Array Prediction Software (LAPS) and directed on-site setup. FOH mixing was handled by Toronto-based freelancer Peter Stoynich, while the mix on the EV Xw12 stage monitors was handled by Gerald Sawchuk, also of Sound Art Winnipeg, with Chase Tower and Dave Coe from Sound Art Calgary on RF and patch, respectively. Mike Noga, an independent technician from Edmonton was the fifth member of the Sound Art crew. 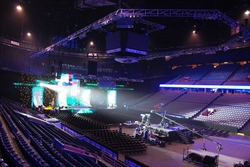 The CCMA awards show was held for an audience of about 8000 at the Rexall Place hockey arena in Edmonton, Alberta. The CBC simulcast, Graham says, meant that lighting had a bigger-than-usual impact on the placement and setup of the system. “Between the stage and the audience, there was a lot of lighting, which meant a lot of hanging truss ending right about where the PA needed to go. So there were issues of where I could fly the line arrays, and how big a rig I could fly. There were issues of trim height as well, because you can’t block the lighting rig.”

To keep the PA as small as possible without compromising on sound, Graham used left/right main arrays that were each made up of 12 XLC127DVX three-way, high-output loudspeakers. “The XLCs give us good sound in a small package, and that was a big help,” he says. “And the array was quite forgiving when we flew it high to clear the lights. The XLCs are so consistent and intelligible that you don’t lose much by having the array a little farther away. So we were able to get them up out of the way and they still performed very effectively.”

Graham also credits EV’s rigging system with helping to work around the placement issues. “The rigging design makes it easy to angle the box and also allows you to get more down-angle than you can get from a lot of other boxes,” he says. “Once we had points and our looms laid out on the cable truss, arraying the boxes was simple and fast. Over 90 points total were being flown that day, so being able to fly the arrays quickly kept our client very happy.”

For side fill, each XLC array was flanked with a 12-box array of XLD281 loudspeakers. “The XLDs integrate really well with the XLCs despite being smaller,” Graham says. “That makes them perfect for a side hang in situations like this one, where sight lines and lighting truss cannot be blocked.”

An additional four XLDs were positioned as single boxes across the downstage edge, and two stacked pairs were used for offstage ground fill. “They're small and they sound great even as single boxes,” Graham says, “so they're perfect for fill in situations where it's impossible to use the optimum positioning. The boxes were below the downstage lip, but I was able to get the coverage I needed without overpowering the first row of seating.” 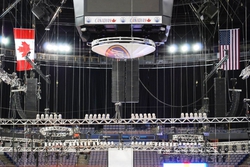 For low end, Graham used 20 Xsub dual 18-inch subwoofers. Two per side were used for ground fill, with the remaining 16 flown in a center cluster. “I did the subs in the center because real estate in the downstage corners was in short supply,” he says. “The Xsubs are solid and smooth. I’ve never had a situation where I’ve had any trouble making them sound good, even in a reverberant arena like the Rexall Center. They sounded great, and because of the rigging system they were quick and easy to hang.”

The system was controlled and monitored via Electro-Voice’s NetMax N8000-1500 digital matrix controller, and powered by a combination of Precision Series and Tour Grade amplifiers. “I used NetMax to send the basic feed from the console to the various zones of the PA,” Graham says, “and also as the crossover for the main arrays. That allowed me to use FIR filtering with the Precision Series amplifiers. Being able to process the PA as a whole system before the signal moves on to the remote DSP for zone control is a valuable feature. I can quickly and easily adapt the system to the room and then fine-tune each zone of the PA as I go, all within the same processing environment.”

The Precision Series amps, used for the main arrays and subs, included 10 standard P3000s and 28 P3000RLs with on-board DSP. The P3000RLs provided zone trim, EQ, and monitoring. Pairing each standard P3000 with a P3000RL, Graham was able to ensure consistent sound by feeding the input of the P3000 with processed audio from the DSP out of the P3000RL.

The XLD zones, meanwhile, were powered by TG-5 amplifiers featuring RCM-26 IRIS-Net compatible DSP and control modules. “The DSP power in the RCM 26 cards is amazing,” Graham says. “Having the horsepower required for FIR filtering in each amp channel makes the system extremely flexible and easy to manage. Plus you also have zone EQ, time, level, et cetera, and you are able to see the load and temperature of every amp channel. It's unbeatable.”

Graham’s enthusiasm is shared by Stoynich, who’s now mixed a number of comparable events on similarly configured Electro-Voice PAs supplied by Sound Art. "I really like the clarity of this system,” he says. “It sounds very natural without overemphasizing anything. We’ve had a great response from the audience and performers alike at several awards shows like this. Sound Art and EV have always come through with fantastic results."