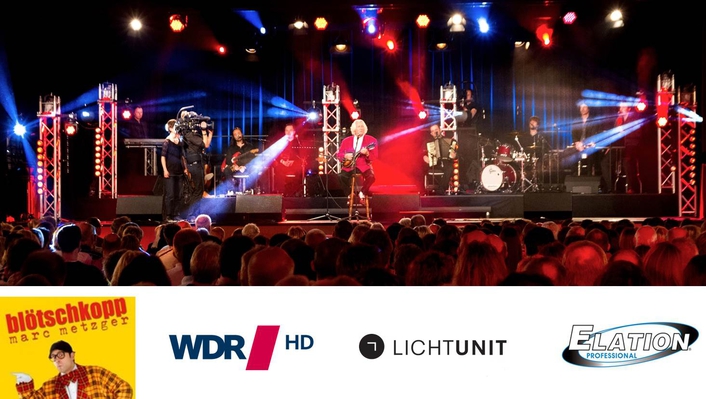 Known for his ingenious and hilarious performances, Metzger gained fame for his role as "Dä Blötschkopp" and is one of the most sought-after artists of the popular Cologne Carnival that takes place every year in western Germany. “In Cologne, we have five seasons instead of four,” comments Stephan Flören of LichtUnit GmbH, who wore several hats for the production, including lighting designer and spot caller as well as key and show lighting op. “The fifth season is the Cologne Carnival, which is very special, and for this special season we have special artists and comedians and Marc is one of them.”

Recorded live for German station WDR, Metzger’s anniversary show, a mix of stand up and music with accompanying band, required a camera-suitable design. “I was happy to test the new Sniper effect on the show and used them generally as a special beam effect, which looked very nice on camera. The speed of the mirror is amazing,” Stephan states. “Another nice thing about the Sniper is its construction. You don’t have a big yoke and things like that: it’s just a compact black box with a nice beam coming out of it.”

The Sniper is a revolutionary hybrid beam, scanner and laser simulator that won an Award for Innovation at the PLASA trade show in London in October. It emits an ultra-narrow beam via a high-speed mirror system to spread scanner and laser-like effects at ultra-fast speeds and without the hassle of laser regulations. Stephan filled the set with the compact luminaires for a variety of unique looks and says that because of the effect there were “no black holes for the cameras!” The show was filmed using five different cameras at several different angles so the possibility of having black areas in the camera shot was great. Lighting and sound supplier for the show was by That’s Sound & Light.

Stephan Flören adds that he would like to get his hands on more Snipers and sees opportunities for the compact effect in smaller venues.  He concludes, “I would love to specify the Sniper again in a matrix format, especially in smaller locations where size matters.”