Kid Rock knows how to keep his audiences happy. Besides proving he can perform a bit of everything musically – rap/rock/hip hop/ blues/country – his shows have been known to offer concert-goers free sandwiches and coffee, not to mention cheap beer and a reasonable ticket price. Out on the road on his “First Kiss: Cheap Date” Tour in support of the acclaimed new album “First Kiss,” Kid Rock is thrilling audiences beneath a rig that includes Elation Rayzor Q7 LED wash/beam and Sniper 2R multi-effect lights.

Lighting supply is by Upstaging with lighting design by long-time Kid Rock LD Nook Schoenfeld, who has been lighting the multi-talented singer since 2000. For special performance-backing color washes and beam looks, Nook placed 15 compact Rayzor Q7 LED movers on a 4’ x 8’ truss pod on the floor in front of the drum kit and directly behind Kid Rock. The versatile center stage effect wall is capable of color washes to chase effects to sharp beam looks. The RGBW Rayzor Q7 is small (only 12.5 inches high and 11 lbs), fast and surprisingly powerful with enough muscle to work with or even cut through visual effects from larger fixtures in the rig. 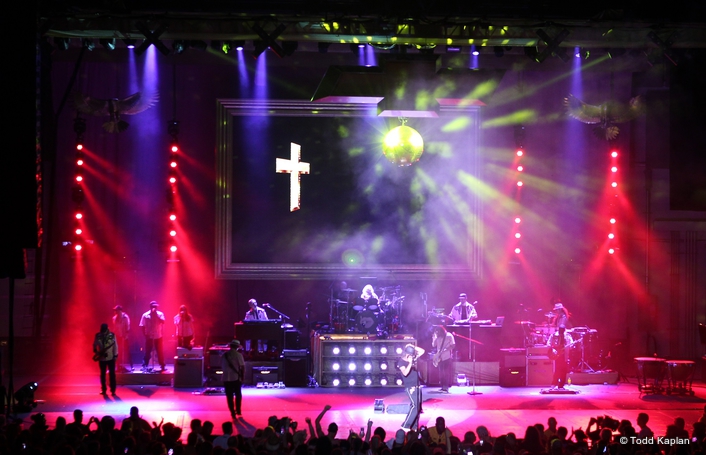 “The Rayzors are my workhorses and held their own against a rig full of bigger automated lights,” Nook states. “By using them in bulk I get massive looks that are cost effective to our budget. They were the ultimate perfect choice as they are plenty bright when pointed at Kid Rock without totally blinding him when he turns around.” Four drop down pipes (lighting torms) from the rear truss hold six more Q7s each (24 total) and serve as fans of light and eye candy.

Adding unique, high-impact effects to the show is Elation’s Sniper 2R multi-effect light, the company’s award-winning hybrid beam, scanner and laser simulator. “I brought the Snipers along to accent our four 20W lasers that I cannot legally shine in the audience’s eyes,” Nook says. “But more importantly, I use them at times when I black out everything else on stage and need a special effect. I use them sparingly, but when they do come on they are the bomb. They do what none of the other 100 moving lights in the rig can accomplish.” The Sniper, powered by the 132W Philips™ MSD Platinum lamp, features super-fast beam movement and a variety of effect options including laser-like effects without the hassle of laser regulations. It also delivers an output that holds its own among a rig of automated lights.

Dubbed one of 2015’s hottest tours, consensus is that Kid Rock has put together one of the busy summer touring season’s best shows. The “First Kiss: Cheap Date” Tour kicked off in June and plays dates across the U.S. through September. 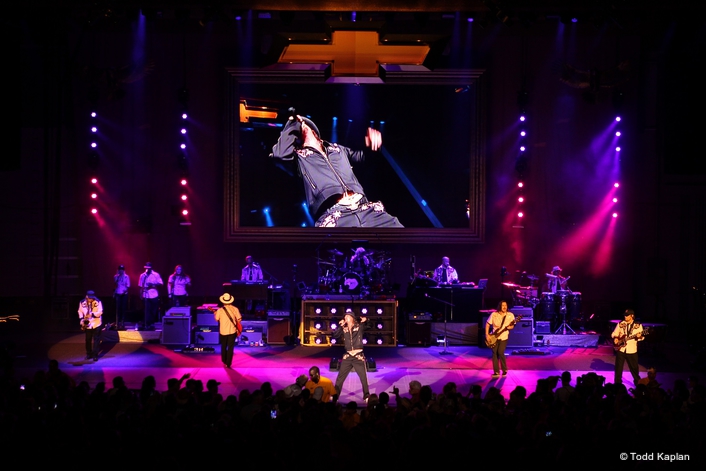