If you’ve never had the opportunity to hear some of rock or country music’s greatest hits performed live by genuine rock and country artists then “Raiding the Rock Vault” and “Raiding the Country Vault” shows may be your best chance. The shows' production was developed by lighting designer Paul Dexter. Both productions present the biggest selling classic songs from an unrepeatable era (mainly 1965-1990) and include Elation Professional Platinum Series™ moving head fixtures and Cuepix Panel™ LED matrix blinders as visual support.

"Raiding the Rock Vault" is a critically-acclaimed show that opened at the Las Vegas Hilton in 2013 before moving to the Tropicana Theater in December 2014, where it is currently in residence. The newest production, "Raiding the Country Vault," premiered in May 2016 in the iconic Mansion Theatre in Branson, Missouri. Production designer and show director Paul Dexter created the stage set and lighting for both shows, including all video content creation and direction. He also came up with the storyline concept and wrote the script.

"Raiding the Rock Vault" is a one-of-a-kind, rock concert experience that takes audiences on a trip across some of rock music’s timeless anthems while “Raiding the Country Vault” takes audiences on a journey through the greatest hits of country music. Lighting “Raiding the Rock Vault” are 16 Platinum Beam 5R Pro™ and 10 Platinum Spot 5R Pro™ moving heads along with 8 Cuepix Panels™ while Paul uses 12 Platinum Beam 5R Pro™ moving heads and 8 Cuepix Panels™ on “Raiding the Country Vault.” The Elation gear for both productions has been supplied by Toucan Productions (toucanproductions.net) of Oklahoma City.

“I use the Platinum fixtures in all ways that they were intended,” Paul says of the flexible moving head fixtures with energy-efficient Platinum 5R lamps. “I use them as a supplementary wash fixture and as air graphics using different focuses from fan to abstract in straight beam and prism mode, or while moving for animation. I also find that it is a great way to specifically point to talent. They really cut through wash colors.”

The Platinum Spot 5R Pros on “Raiding the Rock Vault” are located on the floor behind the set and band while the Platinum Beam 5R Pros on “Raiding the Country Vault” are mounted on upstage trusses with some fixtures located low and integrated into the stage set. “The Platinum 5R fixtures have great brightness for such a small fixture!” Paul states. “I like the prism feature and switching to a tight beam. To have variety makes the fixture that much more valuable. I know that, for the crew, they are an easy hang and they have been, for essentially a permanent install over many months, very reliable.” 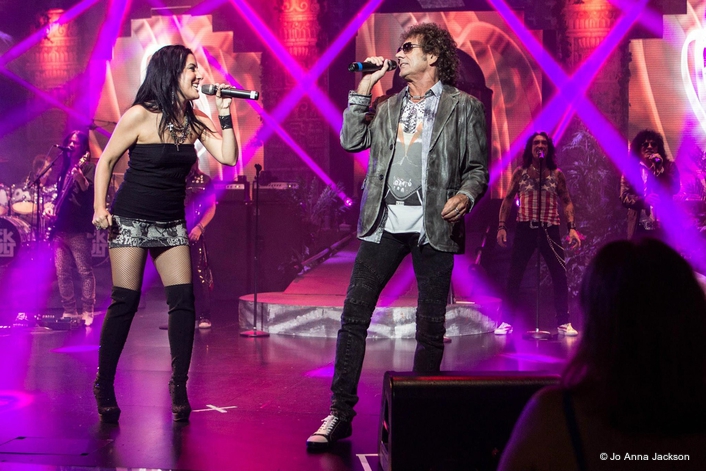 Located on the downstage truss on both shows are high-power Cuepix Panels, 5 x 5 matrix LED panels with 30-watt RGB COB LEDs that Paul uses primarily as an audience wash. “The Cuepix Panels have a way of continuing and complimenting stage color to above the stage,” he said. “In both shows, the macro features help add more glitz to chases, strobing and color movement. I also use them to spell words out like “APPLAUSE” or for the song “Highway to Hell” we spell that out, too.” As far as design differences on each show, Paul says that “Raiding the Rock Vault” and “Raiding the Country Vault” are a brand and therefore the stage sets are very similar. “But there are variations in positioning fixtures owing to space and trying to create a different look,” he commented.

Toucan Productions, a growing production company who inventory a number of Elation fixtures, has supplied a level of support for both shows that Paul is clearly happy with. He comments, “Toucan’s support means everything to me, both as a designer working on the road and creating productions in a theatre. There never seems to be enough time to create the production and to implement the design to total satisfaction as that process is taking place. As organized as we like to think we are, there are details that we didn’t think would come up; something may not work; spares need to be sent; or you can underestimate amounts of anything from hazers to optosplitters to adapters. I may sound like a commercial here, but, for years now, I have never been let down on any account. Robin Alvis, Chauncy Harris, Misty Myers, Brad Meyers, Arvol Dingess - all of their staff works as a team and one big family of dedicated technicians. Their customer service is second to none.”