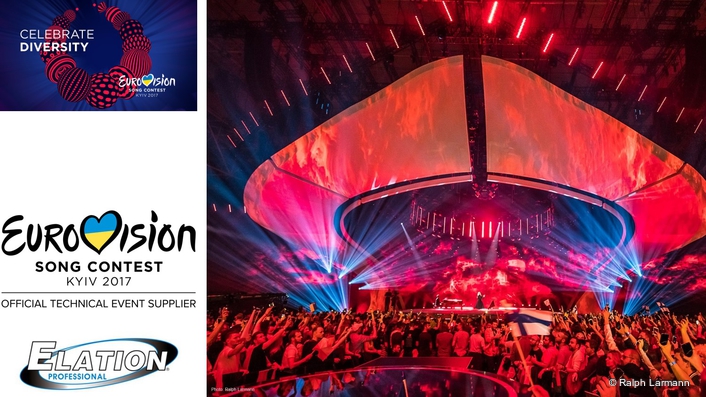 Over 800 Elation lighting fixtures used for this year’s production with lighting design by Jerry Appelt; production headed by Ola Melzig

Perhaps no other show in the world lends itself to the use of intelligent lighting like the Eurovision Song Contest (ESC). With 42 different songs to highlight over the course of three huge shows – not to mention rehearsals and a host of other performances – the flexibility engineered into today’s lighting and video systems allowed the ESC design team to be highly creative when custom-designing unique looks for each performance. 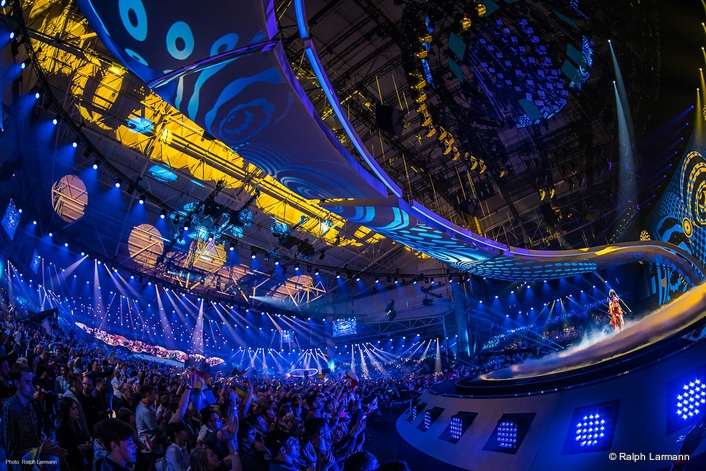 Held May 9-13 at the International Exhibition Centre in Kyiv, Ukraine, proportions mirrored the enormity of the production with 1816 active intelligent lights and 1000 square meters of LED screen used to decorate a performance space of roughly 350 square meters. Some 11,000 spectators attended each show with over 200 million viewers in 50 countries tuning in to watch the Grand Final on May 13.

Elation Professional served as an Official Technical Event Supplier to the 2017 show with a large portion of the intelligent lighting package made up of Elation lights. In the rig were 351 Elation Paladin™ hybrid strobe/blinder/wash lights, 132 Platinum FLX™ hybrid moving heads, 140 Platinum 1200 Wash™ and 70 Platinum Seven™ moving head LED wash lights, along with 110 SixBar 1000™ LED battens. Providing the lighting, video and rigging technology for the show was PRG in cooperation with LITECOM.

Production Manager Ola Melzig has handled the technical production on many ESC shows and again mastered the myriad of production elements necessary to put on a world-class show. Melzig, who produced this year’s Eurovision Song Contest in less than five months, a much shorter time period than normal, produced three spectacular broadcasts with the Grand Final marking his 30th Eurovision broadcast since starting with ESC in 2000. 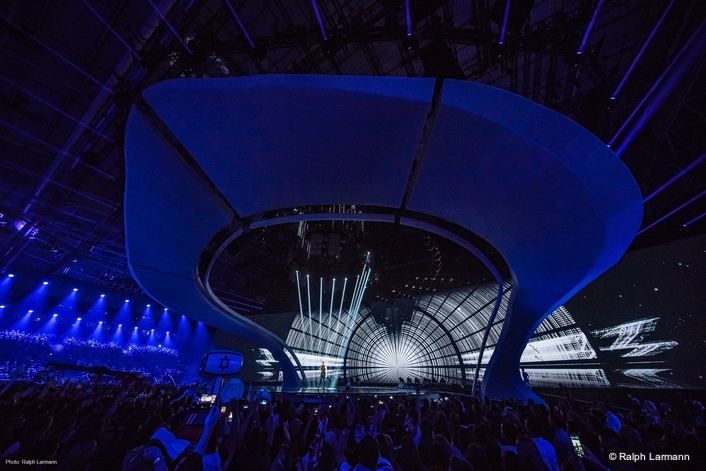 Melzig, recipient of TPI’s Production Manager of the Year award, was key in the decision to go with Elation for the 2017 edition of ESC. He commented, “We were thrilled to have Elation as one of our Technical Suppliers this year on Eurovision. Their product range is a great fit for this show, and believe me we absolutely must have hard core lighting like this to stand up to the challenge! Eurovision puts a tremendous amount of stress on fixtures and they really came through.”

The Eurovision stage, designed by Florian Wieder, featured a large circular LED stage floor with a dramatic, modern arch proscenium curving over the stage that ran visual content. The slogan for the 2017 Eurovision Song Contest was Celebrate Diversity and Jerry Appelt’s lighting design appropriately reflected the diversification and variety presented on stage. When Appelt was on the hunt for a strobe effect that he could place behind the huge, curved, semi-transparent LED video wall that served as the all-important visual backdrop, Melzig set up a shoot-out of fixtures in Cologne and Appelt liked what he saw in the Paladin. “I wanted to create an additional layer behind the LED wall, something that had impact but that could also work together with the LED video and other lighting. We chose the Paladin and it did a marvelous job.”

Making its global debut, the full-color Paladin fixtures were used in a large back wall matrix of 351 units (39 wide by 9 high) and played a prominent role in Appelt’s lighting design. Paladin, a versatile hybrid RGBW luminaire with zoom, functions as a bright blinder or strobe, powerful wash light, or, because of its multiple pixel zone control, pixel map and eye candy looks. “We used them independently and also pixel-mapped video across them,” said Appelt, who lit the Eurovision show for the third time, having designed lighting for the 2011 and 2012 events. Paladin effects, which Appelt incorporated into a large number of songs, popped through the LED screen, sometimes as impactful strobe/blinder effects or chases and sometimes as more subtle eye-candy or warm or cold light twinkle effects, then stealthily disappeared when not in use. “Some of the delegations even asked to have the Paladins used in their performance to give it more power,” the designer added. Head of Production Ola Melzig was equally enamored with them, stating, “The Paladin kicks ass! I love the output, the color and the zoom. It’s an awesome fixture!” 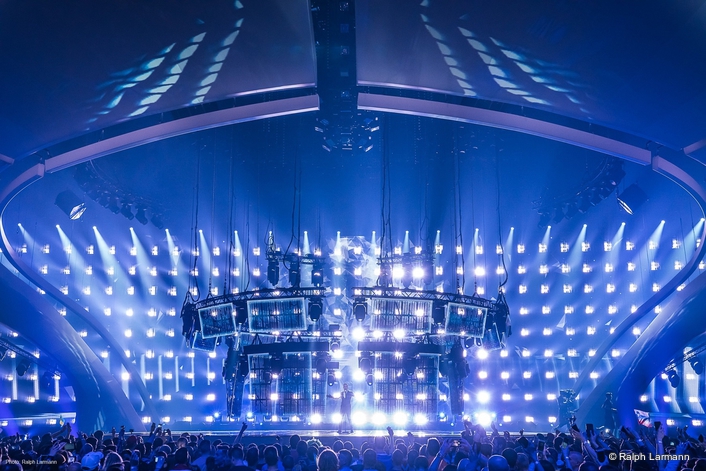 The Eurovision Song Contest proved an opportunity for the Ukraine to show the world a positive face with enthusiastic crowds filling the International Exhibition Center for all three shows, as well as rehearsals. Most of the audience lighting for the show came from Elation’s powerful Platinum 1200 Wash™ LED wash moving heads along with Platinum Seven™ LED wash moving heads.

The Platinum Sevens, reportedly the most stable fixtures in the entire ESC rig, worked from trusses further back in the room and were grouped with Elation Platinum FLX units, which were used to splay the audience in beams when more upbeat moments were called for. “I absolutely love the UV chip in the Platinum Seven,” said Ola Melzig of the high-power LED wash luminaire that uses a 7-color multi-chip LED and also houses a zoom. “Well, I love everything about that fixture, but especially the UV chip!” 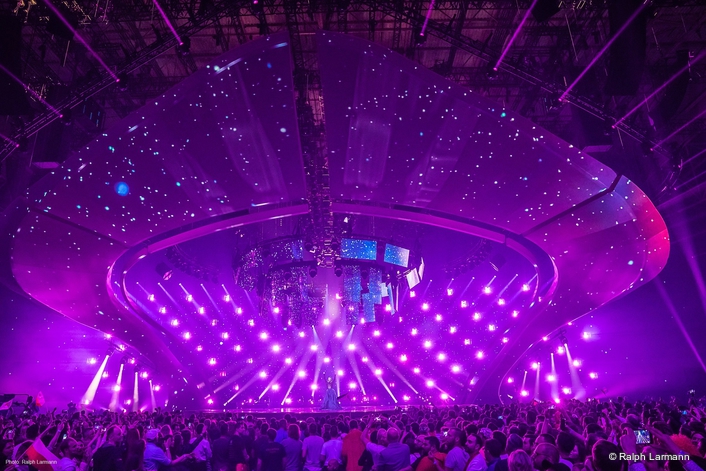 Above the stage hung a key element in the stage lighting setup, a movable ‘beehive’ surrounded by truss that included Platinum FLX hybrids, Elation’s award-winning spot/beam/wash moving head with patented dual optical system. The FLX’s provided some wonderful looks such as artists immersed in concentrations of beams or splayed beam effects with the FLX fixtures projected outward. Additional Platinum FLX fixtures worked from a sidelight position together with the Platinum 1200 Wash fixtures.

The FLX, one of the more popular hybrid fixtures on the market, was chosen by Appelt on reputation. “I knew that satis&fy had added the FLX to its inventory and has been using them since last year,” he said. “I took that as proof that it was a good fixture and they were right.” Ola Melzig adds, “We used 132 Platinum FLXs and we're absolutely delighted with this fixture. It's so versatile, it's fantastic and it's been working really, really good for us.”

The final Elation fixture in the ESC lighting package was the SixBar 1000, one-meter long multi-purpose

LED battens with a 6-color LED multi-chip. Filling the space above the stage arch and curving all the way around it on both sides to reflect its shape, the vertically-positioned SixBar pixel strips provided dynamic chase effects, wash and decorative eye-candy looks throughout the show. SixBar fixtures were also mounted vertically on the outer edge of the beehive for a defining decorative touch. "I love the SixBar 1000!” Ola Melzig stated. “It’s the perfect tool for wash or pixel effects with great color mixing and dimming that hasn’t been seen before." 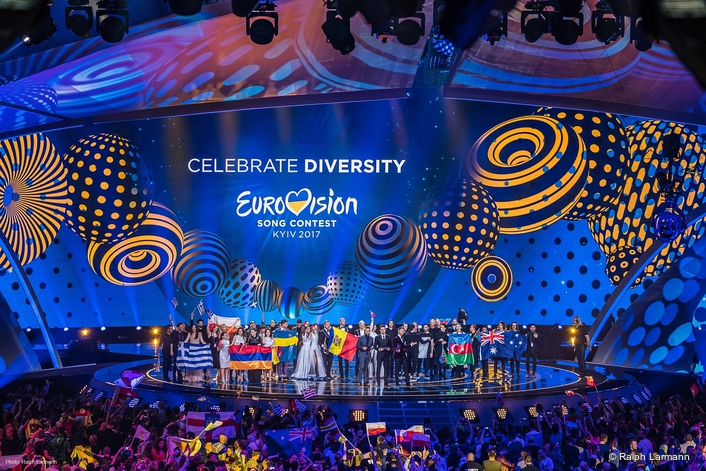 Holding such an immense, high profile show in the Ukraine isn’t an easy job but an experienced production team can make it look like it is, and the end result was a huge success. “Despite some of the challenges working in the Ukraine, the goal was to create a state-of-the-art light show and I was really quite happy with the result,” Appelt concludes.

The 2017 Eurovision Song Contest was won by Portugal, their first win ever, which means the 63rd edition of the show will take place next year in Lisbon. The Contest has been broadcast every year since its inauguration in 1956 and is one of the longest-running television programs in the world.