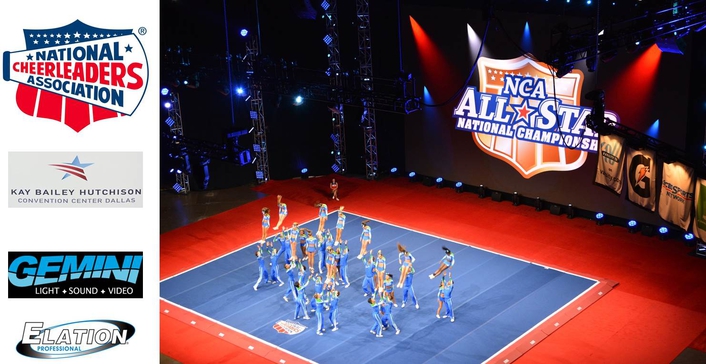 The best cheerleading squads in the country met recently in Dallas, Texas, for the National Cheerleading Association All-Star National Championship with well-practiced routines performed beneath a large dynamic rig that included lighting and video gear from Elation Professional. Held February 19–21 at the Kay Bailey Hutchison Convention Center, production company Gemini Light, Sound & Video of Dallas served as lighting and video vendor for the event, which was televised nationally on the CBS Sports Network. 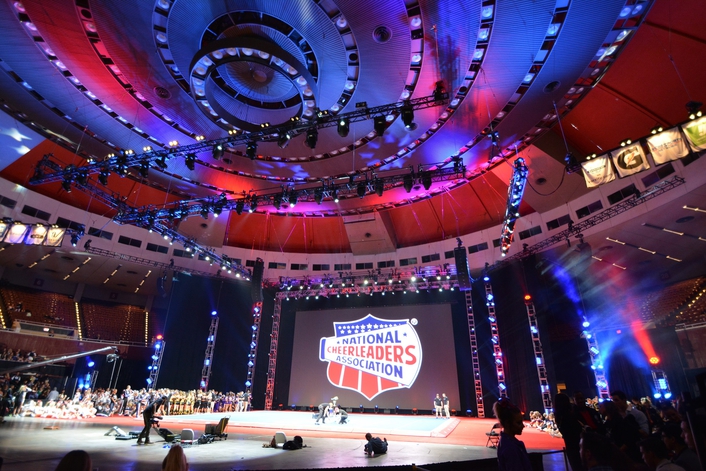 The large LED screen was used to display static images, such as NCA logos, but was also used to show intro videos for each team and was active during breaks to show a variety of other video content such as info clips, sponsor loops, commercial content and promotional cheerleader videos.

Gemini has stocked the EPT6IP panels for nearly a year and has kept the rental-friendly panels busy on tours and special events ever since. Besides the fact that each 25.2 inch square EPT6IP panel is made up of four removable magnetic modules that make assembly and servicing easier, Gemini has created a pre-rig custom cart system for flying the panels that helps them go up even faster. Each wheeled cart holds a truss with a permanently fixed header on which EPT6IP panels are mounted. For the NCA All-Star National Championship some of the panels were flown using the cart system while others were put up as individual panels. Because of load limits in the venue, the entire LED screen system was supported by a 40’ tall ground-based truss structure.

The EPT6IP is a rugged IP65-rated panel with 5000 Nits of calibrated output which was plenty bright for the large amount of competing lighting in the NCA rig. It features 14-bit grey scale processing for a high quality picture with excellent detail and its broadcast-quality 1,920Hz refresh rate meant the screen showed no flickering during the CBS broadcast. “There were really no problems with the screen,” said Gemini’s Jason Cain, who served as lighting and video designer and has gathered quite a bit of experience with the panels since their purchase, including on Slayer’s 2015 summer tour. “The screen looked great – the contrast and brightness is excellent and the resolution is nice.”

Several Elation lighting fixtures were incorporated as part of the large lighting package. These included Cuepix Blinder WW2™ white LED blinders that were mounted on a horizontal downstage truss and used for camera white light. Additional Cuepix Blinders were used to light promotional banners on each side of the stage. Pointed at the audience from vertical truss towers on either side of the stage were ACL 360 Rollers™, Elation’s unique 4-bar moving head luminaire that casts a 360° array of multi-colored effects. Used to provide eye-catching ACL-type beams were Platinum Beam 5R Extreme™ moving heads located on a proscenium truss while Platinum SBX™ hybrid moving heads worked from the floor and overhead truss.

In keeping with Elation’s reputation for top-notch support, Elation LED Video Screens & Broadcast Product Specialist Red Walter was on-site for any technical needs. “We’ve enjoyed a long relationship with Elation and their support has been second to none,” stated Gemini video specialist John Stem. “Elation has gone out of their way on several occasions since I’ve been with Gemini in respect to tech support, backing their product, and making sure Gemini shows using Elation equipment come off to our clients’ high standards.”

The NCA All-Star National Championship is an excellent example of the EPT6IP panels’ increasing popularity. With strategically located rental companies from the upper northeast to California assuring availability countrywide, the EPT6IP LED panels have emerged as ‘go to’ panels for special events and tours across the U.S.