Elation gear up to the challenge on Netflix’s “Hyperdrive” 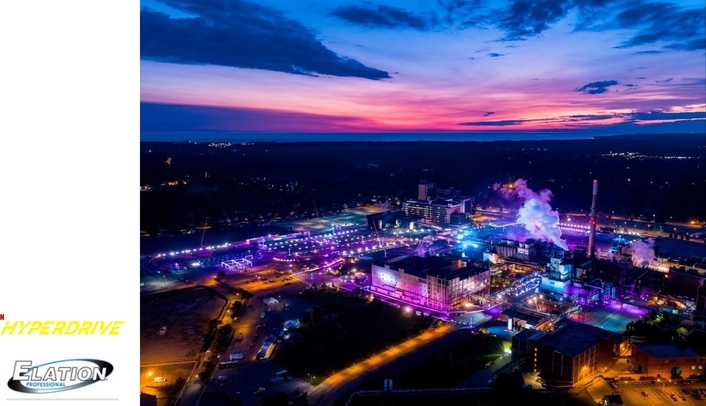 Motts says it was through their work on “Warrior” that the team was brought onboard to light the new reality competition. “We’ve really developed a niche reputation for doing outdoor TV shows,” he says of the lighting team, referencing their work on “American Ninja Warrior,” “Hyperdrive” and a new ABC show called “Holey Moley.” “They are all outdoors in the elements, rain, snow, whatever Mother Nature can muster we’ve been through it. Hence we’ve gone with Elation gear because the IP rating is tremendous for us.”

First season
The inaugural season of “Hyperdrive” was released by Netflix to a worldwide audience on August 21st. Executive produced by Academy-Award winner Charlize Theron, the series was filmed at the Eastman Business Park in Rochester, N.Y., an industrial complex where much of the world’s film was once produced. The complex was transformed into 10 grueling obstacle racecourses with contestants driving custom cars to maneuver through a series of obstacles. After qualifying, knockout and a final round, a “Hyperdrive” champion is crowned. 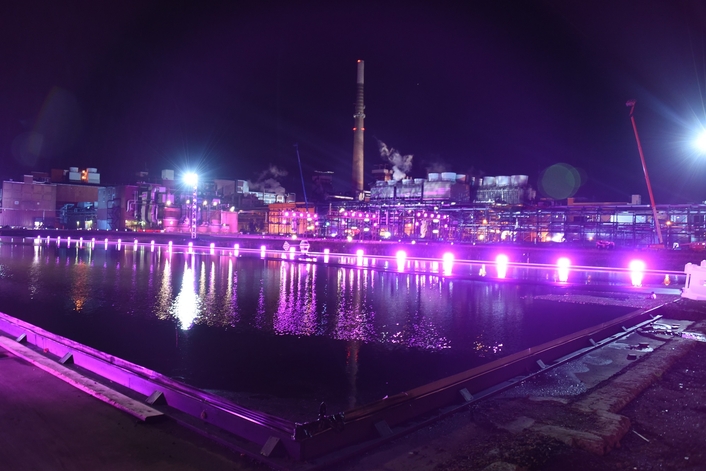 Challenges
The square-mile “Hyperdrive” set was a huge area to light, necessitating a large number of fixtures spread all over the course from elevated to ground-based positions. “The tricky part for us is to light the course in a way that doesn’t get in the drivers’ eyes,” Motts explains of one of the challenges faced. “So we had to make sure beams weren’t hitting drivers in the face. You would hate to see someone get into a crash and have them say that a blinding light caused it.” Fixture placement was therefore a challenge made even more so by the fact that the course changed throughout the episodes with, for example, cars driving one way in one episode and the opposite way in the next. 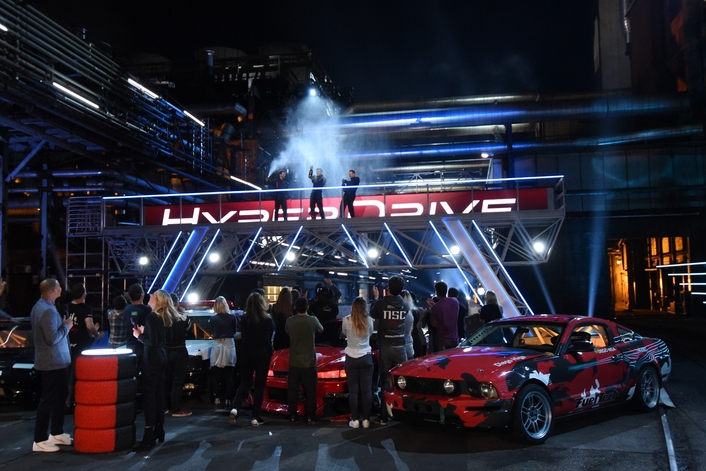 IP65
The choice of IP65-rated fixtures was an obvious choice for Motts, who has been an early adopter of weatherproof lighting. “We were one of the clients who asked for more IP rated lighting years ago,” he says. “More and more shows are going outside and people are tired of having to use covers. Elation has responded by offering more and more IP65-rated lights and we were glad to have them on Hyperdrive as the weather didn’t play nice. It was pouring down at times and we had to scramble to cover up fixtures that weren’t IP rated.”

Obstacles
One of the show’s many challenging obstacles is called Walk on Water, a 50,000-gallon water hazard where cars follow a marked path through a pool of water. “We asked ourselves how we could add a little flavor to the obstacle, a bit of eye candy,” Motts says. “Being so close to the water, we lined the pool with Cuepix 16 IPs which ran effects as the cars raced by. When cars veer off the path, there are big splashes of water and the fixtures get soaked but they’ve been amazing.” The Cuepix 16 IP, a powerful 4x4 matrix LED panel with all-weather protection, were also used to light up some of the buildings around the set.

Large numbers of IP65-rated SixPar 100 IP LED PAR lights colored the set with Elation’s Proteus Hybrid arc source moving heads operating in several areas as a wash light to beef up zones that required more light for camera. The multi-functional Proteus were located on vertical truss and condors that allowed them to boom out over the course so that on camera you couldn’t see where the light was coming from. “Even though we only had 34 of these fixtures, they fulfilled a lot of roles and did whatever we needed them to from backlighting the car and host in the main host area to lighting the six-story Leveler to lighting buildings.” 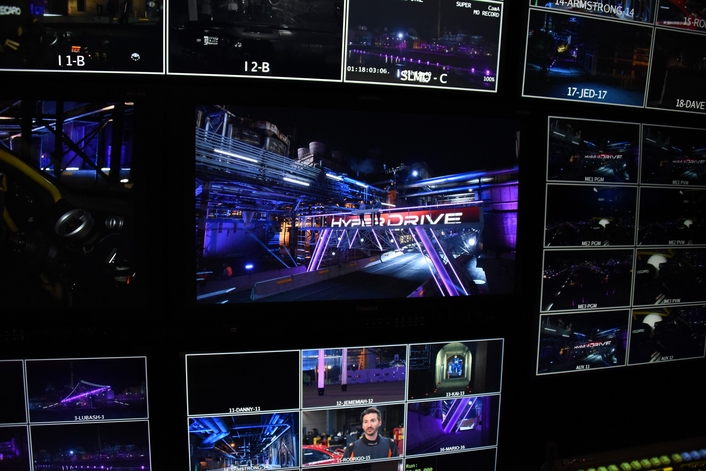 Up to the challenge
Motts says that, when filming and it begins to rain, shooting continues as they scramble to bag as many non-IP fixtures as they can. “We had a lot of Platinum Beam 5R Extremes on the ground and on structures, which isn’t an IP65 fixture but it sure seems like one. We tried to bag as many as we could when it rained but they held up regardless although we did have a few along the finish line straightaway get wiped out by cars going 120 mph!”

Creatively filmed with multiple camera angles capturing all the action, including from drones, Motts says they never had any issues with the fixtures including the camera aspect. “No flicker issue, no color issue, they held up to everything,” he said. Lighting was under control of an M6 console running ONYX software by Obsidian Control Systems while Elation Wireless DMX Transceivers were used to facilitate DMX communication with lighting fixtures where hardwired solutions were impractical.

Spread over 10 episodes, “Hyperdrive” is one of the most phenomenal obstacle courses ever designed. Packed full of excitement with a demanding course that is a marvel to look at and superbly lit, it is likely to be a Netflix staple for years to come.