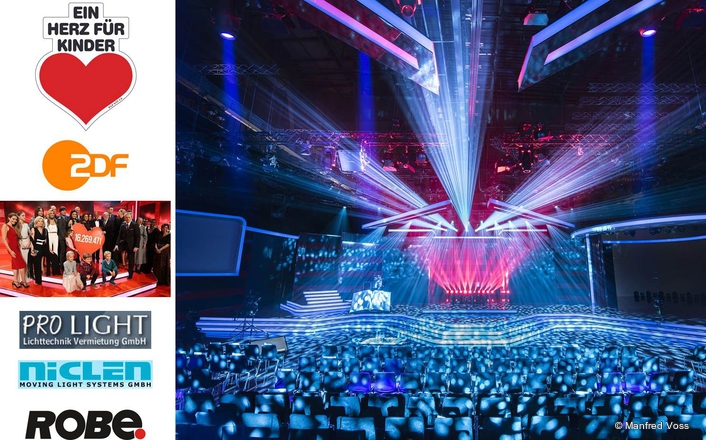 Technical Provider was the Berlin based PRO LIGHT Lichttechnik Vermietung GmbH.  The BMFL Spot fixtures were supplied by NicLen.

Sixty of the BMFL Spots were used to light the audience and 40 were dotted around the stage – all hung on trusses in the roof. They were used throughout the show for a variety of tasks including creating general lighting ambience and scenes as well as spectacular effects for the cameras and the   live audience.

Voss chose Robe‘s BMFL for  its low weight -  under 36 kg – its fantastic  zoom range from 5 to 55° as well as its incredibly bright light output.

The lighting crew were extremely impressed because the highly innovative BMFL offers many advantages over existing 1500 Watt lightsource class fixtures and is fast becoming a ’benchmark‘ product in terms of the power vs. weight ratio.

They loved the gobo projections combined with colour mixing. Due to the fixture’s intensity, audience backlighting in blue with the use of gobos didn’t need any additional wash lighting.

All of this – and much more – makes the BMFL a hugely flexible choice.

Frank Hofmann und Andreas Haslbeck operated the event’s lighting using a GrandMA 1 console. The set was designed by Hassler Made GmbH and the programme directed by Ladislaus Kiraly.

The event raised over 16 million Euros for the “Ein Herz für Kinder” organization. It was founded in 1978 by publisher Axel Spinger and the BILD newspaper, originally to promote traffic safety for children. Now "A Heart for Children" raises large sums of money year-round which is dedicated to helping children living tough and challenging lives, supporting non-profit organizations, projects and children's hospitals, kindergartens, schools and food banks. In collaboration with hospitals, the organization also enables life-saving treatments and surgeries for overseas children and help for children and young people caught in war and conflict zones and disaster areas.