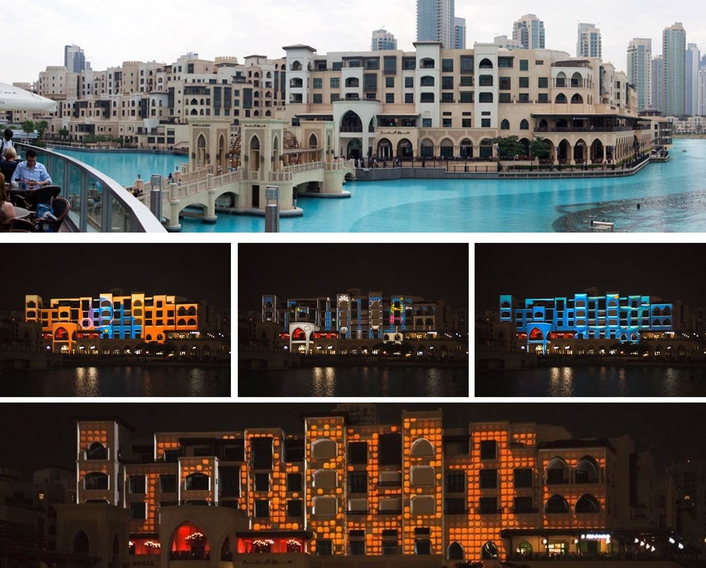 Commissioned by Prague-based Tomato Production to deliver the jaw-dropping promotion for Coca Cola Middle East’s Fanta brand, Eclipse used the Roadsters, fitted with 2.6-4.1:1 lenses, to project from a café on the first floor of the Dubai Mall (the world’s largest mall) over a distance of 114m onto a 3840 x 1080 resolution landscape.

Tomato’s creative associates, The Macula, were engaged to provide the Fanta content in the form of a video game / chase sequence for the client’s ad agency Memac Ogilvy Dubai.

Tomato Production had been contracted by the agency based on their previous work — most recently celebrating the 600th anniversary of the astronomical tower clock situated at Prague’s Old Town Square, also pixel-mapped using a pair of Christie Roadster HD18K projectors.

“After discussing the preliminary creative desires for Fanta and the shortcomings of the Souk building, which was not ‘mapping-friendly’, we prepared a basic concept,” said Tomato Production’s Martin Posta. 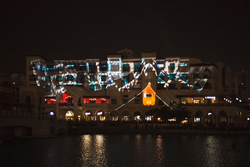 Depicted in the projection were two characters, small enough to be visible on such an architectonically ‘broken’ building, chasing one another. The remainder of the content was based on a story produced by The Macula artists collective.

Their team had arrived on site a month earlier to draw the building, using the same projectors and equipment layout to ensure it would deliver their idea. Using cameras and working through the night to draw round the building the pixel-map specialists were able to position the projectors as they would be for the actual event.

After scouting the preliminary location it was decided that two pairs of HD18K 1920 x 1080 Christie projectors would be necessary in order to ensure the maximum impact over— and Eclipse were contacted for the supply.

The projectors and monitors were fed from an Intel Pentium i7 high powered PC, fitted with Nvidia graphics video card, via four DVI outputs, using ImagePro processing to all computers.

In the end Eclipse did not need to call on the Twist or warping facilities since they were able to cover the building perfectly using the two double-stacked projectors side by side. The image filled the building from top to bottom and any twisting and warping was effected in the animation.

Eclipse ran 2 x 175m lengths of cable to power all the kit at the café with a further 100m LC fibre cable transporting the audio from the café to the audio control room under the Mall.

The extensive build and testing procedures that the production underwent certainly paid off, as Eclipse were able to run a seamless performance over Thursday and Friday night. They presented eight shows in all — before each of the Mall’s famous Fountain Shows, between 19:25pm – 22:55pm. “Thanks to the highly-creative footage, the Fanta stunt received great media feedback,” reports Eclipse project manager Paul Foschi.

In fact both the client Fanta and Memac Ogilvy Dubai were said to be ecstatic with the impact of the display — and Eclipse are hoping that this will prove to be the first of many such projections.

Watch the video of the event