ECHO Awards with Microphone and Monitoring Systems from Sennheiser

Rehearsals for the big event: the ECHO Awards honour Germany’s most successful artists
On 22 March, the curtain went up for the 21st time on Germany’s ECHO Awards, televised live by public broadcaster ARD from the Messe Berlin exhibition centre. The awards show had an impressive opening, with a powerful medley by the nominees for the best radio hit and a marching band on three stages. Sennheiser microphones and monitoring systems played a key role in the show’s success. All wireless monitoring systems were provided by Sennheiser, with wireless Sennheiser microphones also being used by the majority of the live acts, by all of the award presenters and by the two show presenters Ina Müller and Barbara Schöneberger.

A glittering array of stars from German and international show business accepted the invitation from the Deutsche Phono-Akademie to come to Berlin for the award ceremony. The academy chooses the ECHO winners on the basis of the sales figures and downloads achieved by the musicians – thus representing a good cross-section of the entire (music-loving) population, reflected by categories as diverse as German folk music and “Club/Dance”.

This ‘family gathering’ of the stars was marked by several shared performances, including a “Valerie” medley in honour of the late Amy Winehouse or a performance by the three dancefloor stars Oly Murs, Taio Cruz and Sean Paul, who combined their hits “Heart Skips a Beat”, “Troublemaker” and “She Doesn’t Mind” to form a joint act. Successful teamwork was also a feature of Sennheiser’s microphone and monitoring technology, with the company EBS-lights Veranstaltungstechnik providing equipment from its own inventory, complemented by systems from MM Communications, Sennheiser Global Relations and Sennheiser Vertrieb und Service (SVS). “We have been working closely with the ECHO Awards production team for almost ten years now and are very pleased that such a good partnership has developed,” explained Thomas Holz, responsible for Artists and Engineers at SVS.

It is also a partnership that the engineers greatly appreciate. As Dirk Pinger, Head of Sound for ECHO and monitoring engineer, pointed out: “When the going gets tough, the support team is there to assist us. That’s a huge benefit at such a major event.” Tobias Kühnel from Showplan, the production manager for the ECHO Awards, added: “We were glad that Sennheiser was there to support us once again this year. At events like this, very good preparation and professional equipment are absolutely essential.” 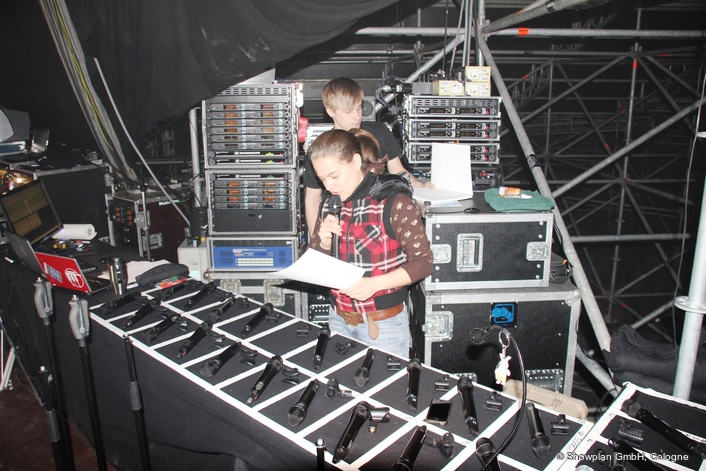 Frequency planning was in the safe hands of RF Manager Svenja Dunkel, who was forced to significantly extend her preparation time due to the complexity of the current frequency situation in Germany. “The many medleys presented us with an incredible challenge in dealing with all the microphones and in-ear systems. The bands, show presenters and award presenters used a total of 65 microphones and 26 in-ear channels with 80 beltpacks. Added to this, we needed further frequencies for television, radio and the red carpet as well as the production radio system and the security teams’ walkie-talkies, which meant that, in the end, we had to provide just under 190 compatible frequencies.”

This involved coordinating with potential frequency users and ordering the equipment with the suitable frequencies in good time – eight weeks before the show. “The really intensive phase then begins two or three weeks before we are able to work at the venue itself,” explained Svenja Dunkel. “This is followed by a week of setting up the equipment, then the rehearsals and finally the show. It’s still possible to make minor frequency adjustments before the rehearsals begin, but the general frequency framework has to be in place – and it’s essential that we avoid any kind of interference from outside.” The RF expert was able to rely on her experience with events of this magnitude and the fact that she knew most of the artists and bands personally. “The successful finale was the result of fully functioning communication encompassing every area, very good cooperation with the Federal Network Agency and the fantastic support provided by Sennheiser, with its special material and its intuitive understanding.”

The live acts performing with Sennheiser microphones included Katy Perry with her special crystal version of the SKM 5200, who presented her new single “Part of Me” for the first time on German television, and Lana Del Rey, who performed “Video Games” with an SKM 5200 with KK 105-S capsule. The band Die Toten Hosen were there with their new single “Tage wie diese” (Days Like These) and, like Jan Delay, used SKM 2000s with MMD 935-1 capsules. Tim Bendzko and Shaggy performed “Nur noch kurz die Welt retten“ (Just Gotta Save the World) with their SKM 5200/MD 5325; Roman Lob, Germany’s “Star for Baku”, sang “Standing Still”, and rock band Kraftklub used SKM 2000s with MMD 935-1 capsules.

The laudatory speech for the presentation of the Lifetime Achievement Award to Wolfgang Niedecken was held by Campino from Die Toten Hosen using two ME 36. Other awards presenters included Mando Diao, Barry Manilow, Lena and Marilyn Manson, who also sang “The Beautiful People” together with Rammstein.

Pierre Morant, Global Relations Manager EMEA at Sennheiser: “It was a great honour for us to be present at the ECHO Music Awards. It was an extremely successful show, which was the result of thorough preparation, meticulous attention to detail and the wide experience of all those involved.”