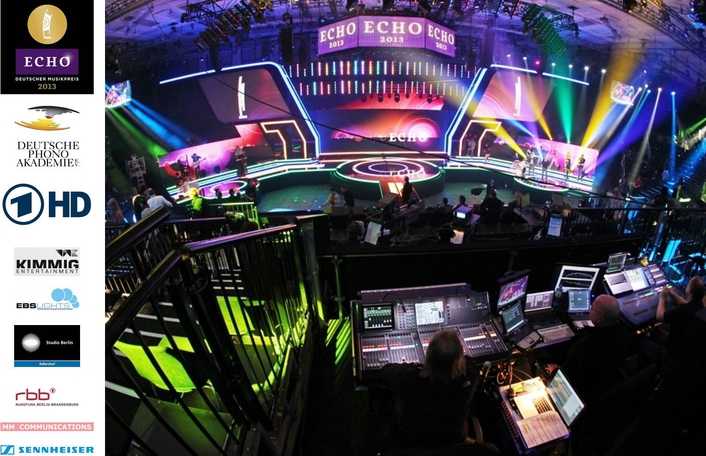 ECHO 2013 presented awards in a total of 27 categories, and the undisputed winners of the evening were the band Die Toten Hosen, who scooped no less than four of the coveted prizes. The German rapper Cro and the American singer-songwriter Lana del Rey also picked up multiple awards, while “Voice of Germany” winner Ivy Quainoo was named “Best National Rock/Pop Female Artist”. Eurovision Song Contest winner Lena Meyer-Landrut was presented with an ECHO for “Music Video of the Year”, and soundtrack legend Harold Faltermeyer came on stage to congratulate German dance duo Deichkind for winning the “Electronic Club/Dance” category. Hannes Wader, the legendary German singer-songwriter, was honoured with a Lifetime Achievement Award and was presented with the ECHO trophy by his long-standing companion Reinhard Mey, who chose some moving words on the merits of the award-winner in his speech. 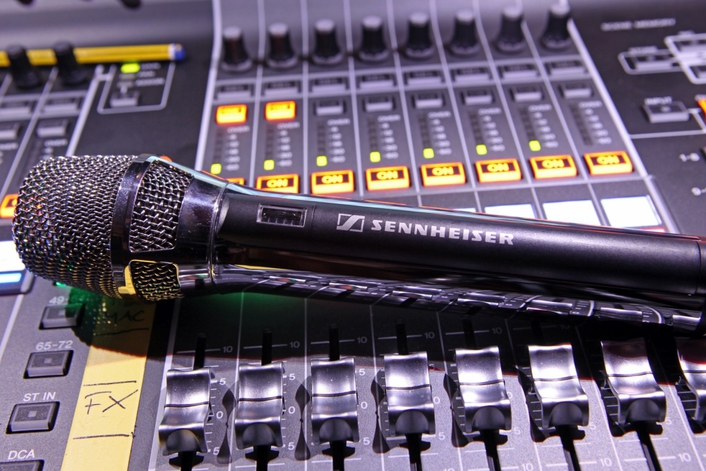 Specially made for ECHO: a platinum-look SKM 5200-II

Show
Musical entertainment at the highest level was presented in the course of the evening by top acts such as Depeche Mode, Emeli Sandé, Carla Bruni, David Garrett, Hurts and Seeed, all of whom delivered outstanding performances. “Panda rapper” Cro had a special surprise in store when 50 panda-masked Cro look-alikes turned up on stage for his number – and the sound team equipped the entire team with 50 Sennheiser SKM 5000 and one SMK 5200 (Cro), all in a uniform design.

Helene Fischer hosted the evening with her usual flawless professionalism, with two Sennheiser handheld transmitters at her disposal. Already familiar from her concerts, her SKM 2000 with an MMK 965 capsule was adorned with around 3,000 SWAROVSKI ELEMENTS that perfectly matched the star’s stage costume. The glittering crystals also extended over parts of the transmitter’s antenna, without, of course, impairing its secure wireless transmission. The host also used a platinum-look SKM 5200-II, which was a real eyecatcher with its high-gloss polished finish. Another highlight was the handheld transmitter used by Alina Süggeler, vocalist from the band Frida Gold: in keeping with the band’s name, her Sennheiser SKM 5200-II had a wire mesh basket in a gold-effect finish. 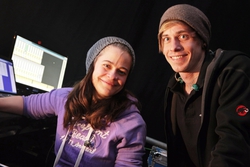 Microphones
Setting up the wireless frequencies for ECHO 2013 turned out to be a highly complex affair: “If you include the walkie-talkies, we needed more than 200 frequencies!”, explained Svenja Dunkel in Berlin. The highly experienced sound engineer, supported by her colleague Tom Haubrich, not only had the job of looking after the wireless systems for the musicians and bands during the show. In her capacity as frequency manager, she was also responsible for coordinating all of the wireless requirements. In close cooperation with the Federal Network Agency, the performers and the technical teams, she was able to develop a binding frequency grid for the show. The huge amount of wireless equipment needed for ECHO 2013 was supplied by EBS LIGHTS EVENT Business Solutions, Studio Berlin Adlershof (SBA), rbb Rundfunk Berlin-Brandenburg, and MM Communications (Markus Müller), as well as an equipment pool provided by Sennheiser.

Special attention also had to be paid to the new wireless communications standard LTE, which in the meantime has coverage across the whole of Berlin and occupies the frequencies between 790 and 814 MHz as well as 838 and 862 MHz. “This year, we had to completely avoid the frequency band spectrum occupied by LTE with our wireless equipment – the only exception was the lower duplex gap,” said Svenja Dunkel.

Optimum transmission quality and excellent sound were ensured by numerous Sennheiser wireless systems from the 5000 and 2000 series, which were used with both handheld transmitters and bodypacks. Operating outside the usual wireless frequency ranges, three Sennheiser ew 100 G3-1G8 systems were made available for dance rehearsals and similar applications, and by using the range between 1,785 and 1,800 MHz they had no effect on the rest of the frequency planning. Almost 120 bodypack receivers were available for in-ear monitoring; more than 60 Sennheiser EK 300 IEM G3 were operated on two frequencies. Die Toten Hosen brought along their own equipment for their live performance (2 x EM 2050 + 4 x SKM 2000 with MMD 935+ 3 x SR 2050), and this also had to be taken into account in the tightly packed frequency grid. 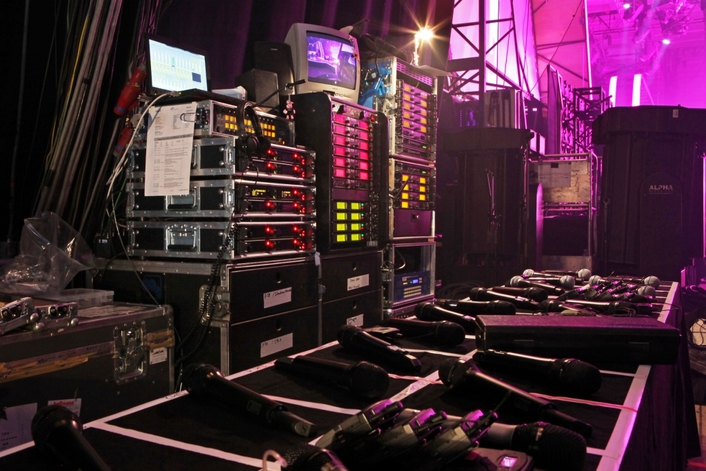 Remote monitoring and control for the Sennheiser wireless systems was provided by the “Wireless Systems Manager” software, which, in spite of the high number of channels involved, ensured a very good overview with groups of screen layouts. The RF situation was monitored by the installed antennas and was visualised by the analyser integrated into the WSM software. Perfect coverage of all of the performance areas was guaranteed by various Sennheiser antennas, including A 2003-UHF, A 3700 and A 1031-U as well as circularly polarised A 5000-CP for the IEM systems.

Sennheiser was also responsible for a large number of wired microphones at ECHO 2013. The focus in particular was on products from the evolution 900 series, which were used for instrument miking and backing vocals.

Passion for perfect sound
Pierre Morant, Sennheiser Global Relations Manager EMEA, was delighted with how the show went off: “For Sennheiser, it’s always an exceptional privilege to be part of this award ceremony – the 22nd ECHO was another huge success! Thanks to the expertise of specialists such as MM Communications, EBS, Toby Kühnel from Showplan and many others, the event was once again able to benefit from perfect sound.”

ECHO Awards with Micropho... Systems from Sennheiser
Echo Awards hits the high...otes thanks to Sennheiser
REVIEW: The Eurovision Song Contest 2012