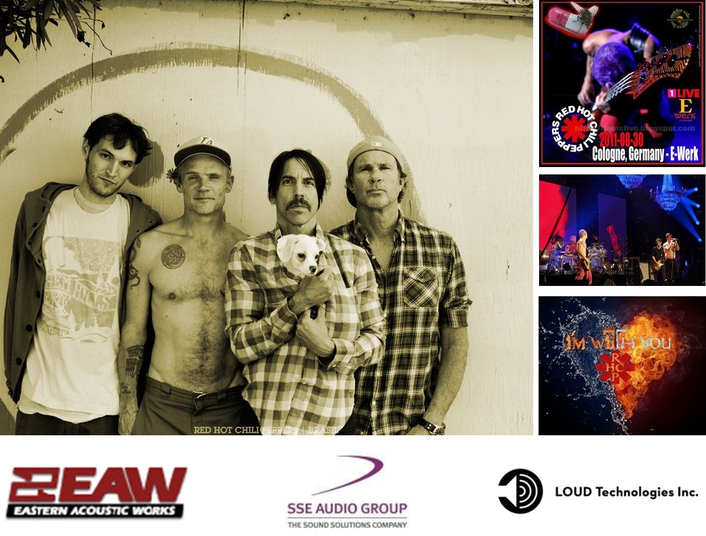 MicroWedges/MicroSubs support KF730 house rig for sound engineers Dave Rat and Tim Engwall
In order to generate high-octane promotion of their new album I’m With You, Red Hot Chili Peppers recently simulcast a live concert from Cologne to cinemas throughout the States.With their long-serving FOH engineer, Dave Rat, piloting the house mix, the band performed all songs off the album plus many other selected hits — largely through an EAW sound system.

The European promo run immediately preceded the South American leg of the band’s stadium-sized world tour, and according to Rat, the concert at Cologne’s 2,200-capacity E-WERK was a huge success — largely due to the presence of the compact EAW KF730 house system and combination of MicroSubs and MicroWedge floor monitors.

This venue was chosen since Germany is the band’s largest European market, and Cologne the city where their European arena tour commenced in early October.

The bulk of the sound equipment has been supplied by SSE Audio Group — a regular resource for Dave Rat. “In fact I have used SSE with great results for quite a few tours,” he states.  “One of the huge benefits of having SSE there was the techs they supplied — I’ve worked with both Ollie [Waring] and Tom [Wiggans] before and their familiarity with the set-up really helped.”

The inventory includes a pair of EAW MicroSub 15’s and a further eight MicroWedge 12 and two MicroWedge 15’s, which the band has been using since rehearsal began back in May. Alongside this in Cologne, were the installed KF730’s, 12 hangs per side.

For this show SSE duplicated the MicroWedge setup — described by Dave Rat as “an excellent high-performance monitor” — while the touring MicroWedges were shipped down to South America in readiness for the next leg of the tour.

“This Peppers tour is the first time Chad [Smith] has used a new drum fill setup in 15 years or so,” confirms the FOH engineer. “He has gone from a dual 15” sub and two dual 15”/dual10”/2” cabs to two MicroSub 15” and two MicroWedge 15” — quite a size reduction! It’s pretty exciting to be reaching the levels we are seeking with something so much more compact and versatile!”

Production also recently added an EAW MicroWedge 8 on the drum riser to enable Josh Klinghoffer to hear his guitar while standing in front of drummer Chad Smith.But for the simulcast show, the logistics of scaling an arena-sized production into a club set-up was challenging in terms of both space and volume levels.

“We needed it sufficiently loud to be a rocking stage show, yet not so loud that it ruined the broadcast audio,” Dave Rat explained. Working with Andrew Schepps, who supervised the broadcast truck, he organised miking and truck feed supply, with the pressure for perfection providing the primary focus.

Other pressures included where to site the monitor console on such a small stage, while out in the house, Dave Rat himself opted for a Midas Verona console to keep his footprint down and allow him to grab a centred mix position.

The mix itself threw up further challenges, knowing that splits would be sent for broadcast purposes. “Things like feedback and ‘room boom’ — where the venue sound overpowers the band — had to be avoided. I therefore mixed a bit more tame and album-like than I would have done for a non-broadcast event,” the sound man admits.  “Also I maintained a more consistent overall volume level than the freedoms of a typical gig would allow me.”

While the show was being recorded, Andrew Schepps took notes and immediately it ended it was played back, allowing him to send an active real time mix to the theatres. The high-def digital satellite presentation itself was made by National CineMedia Fathom and BY Experience.

Summing up, Dave Rat stated, “Everything I heard back was positive, and the KF730’s were a great fit for the gig.  The small, light weight, hi-fi sounding boxes allowed the room to be fully covered. I had the headroom I needed and did not need to do much work EQ wise.”

He said he was just happy to be part of an innovative process.  “As downloading music continues to devalue the uniqueness of recording, offering an event to attend is a great way to give the fans an experience to remember. “For me, [working with the band] has been a long and wonderful adventure, I truly am honoured to be a part of the Peppers’ world.”

About EAW
Founded in 1978 and celebrating over 30 years of excellence, Eastern Acoustic Works® (EAW®) is a global leader in producing high-performance professional audio equipment trusted by the most discerning professionals for every possible sound reinforcement application.