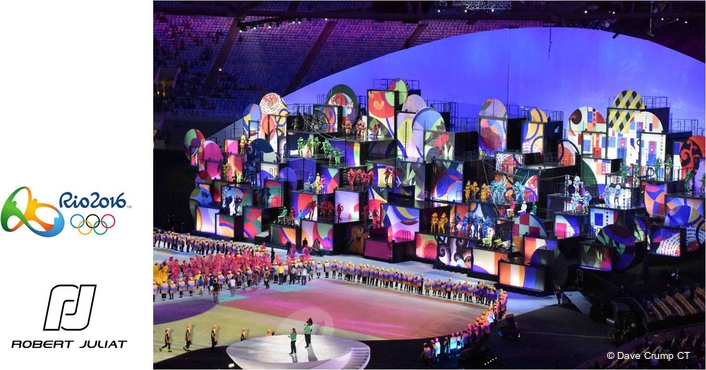 The long-throw RJ Lancelot units were rigged on the highest ring of the tribunes covering more than half of the stadium’s perimeter and provided strong key lights for the camera shots on the main performers as the much-anticipated event was broadcast around the world. With the stage positions changing in both of the Ceremonies, and the Box City set at the far end of the stadium during the Opening, the top spots were required to perform at throw distances between 100m and 300m. 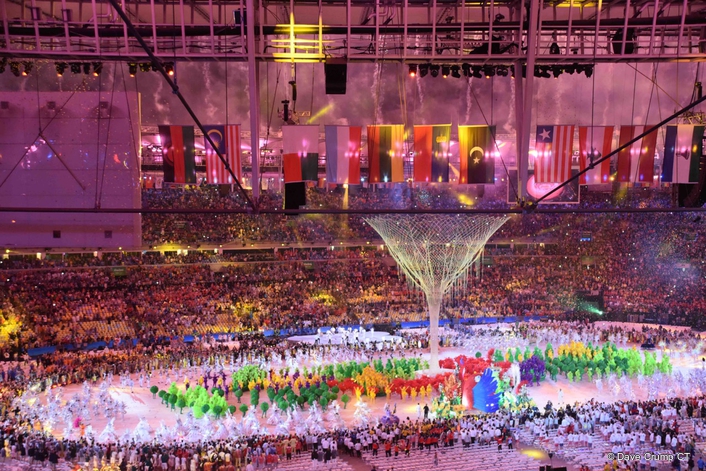 The four RJ Cyrano followspots were sited at field-level on the four ‘corners’, and used where the critical angles of the top spots would have created unacceptable shadows on the projection floor surface. The Cyranos were positioned on dollies that allowed them to be moved clear of cast movements and to be retracted into the shelter of tunnels during heavy rain. These dolly mounts were also used during the Closing Ceremony to move the Cyrano spots into position for specific cues whilst clearing the athletes’ seating located in the central Field of Play. 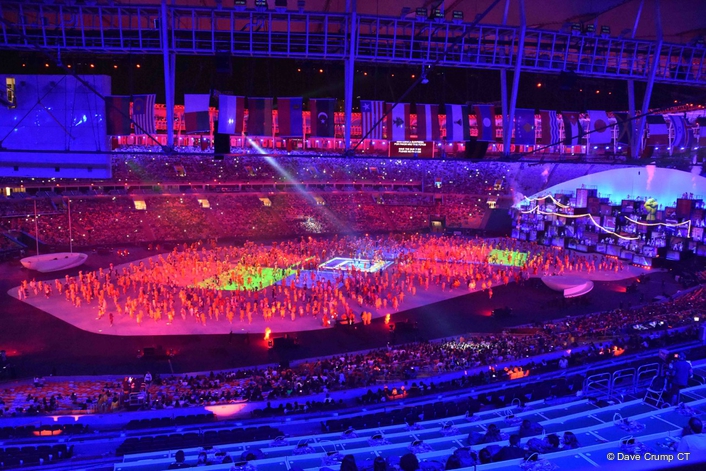 Chris Henry, the spot captain employed by Marenghi, worked alongside Agora, the Italian-based lighting supplier for the Ceremonies, and was very happy with the Robert Juliat performances: “The Lancelots and Cyranos did just as well as we expected them to, even at the longest distances,” she says. “The light was seamlessly blended throughout the whole illuminated surface and the glass frost filter in the Cyranos at field level proved very useful during Closing. We were also able to use this effectively, in addition to a light frost in the magazine, to light the tree as it was raised during the Closing Ceremony. We were able to balance the spots for colour and light output which was vital given the level of projection in the show.

“I was sure of the good qualities of Robert Juliat spots and I was not disappointed.  The operators felt comfortable with the followspots, the controls are ergonomic and spots are well balanced.”

Marenghi states: “Followspots are our most important key lights, especially for the protocol moments such as the flags, the speeches and torch sequence, so their qualities are fundamental to the success of the show - as is pointing them in the right direction at the right time and in the right colour, which Chris coordinated superbly with some excellent operators.”

Following their work on the Olympic Ceremonies, the Lancelot and Cyrano spots were brought back into action for the Paralympic Games which were held at the beginning of September.

Marenghi was assisted by his Brazilian associate lighting designer, Joyce Drummond, and programmers Andy Voller and Ross Williams from the UK and Paulinho Lebrão from Brazil. The Brazilian followspot operator team was coordinated by Chris Henry from the UK, and overseen along with several Brazilian technicians by lighting team manager, Jennie Marenghi. The TV lighting director was Nick Collier, and Nicola Manuel Tallino and Giulio Ravelli headed the Agora team.