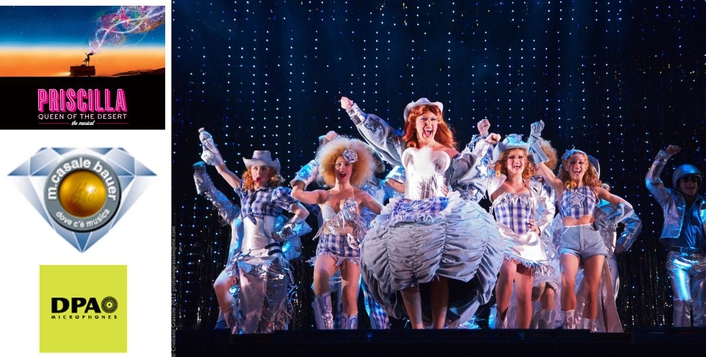 The entire cast of Priscilla, Queen of the Desert are using DPA’s Headset Microphones for the Italian leg of the musical
An Italian touring production of The Adventures of Priscilla, Queen of the Desert – The Musical has arrived at the Politeama Rossetti theatre in Trieste, where audiences are enjoying great sound thanks to the extensive use of DPA Microphone’s 4066 Omnidirectional Headset Microphones and 4060 Omnidirectional Miniature Microphones.

DPA’s Italian distributor M. Casale Bauer has supplied the production with a total of 34 DPA Headset Microphones, which are being used for every member of the cast (plus a few spares). The show’s sound engineer Cristiano Grassini says the microphones are performing flawlessly every night and are proving very popular with cast members because they are so light and comfortable.

“The original Australian production of the musical specified DPA Headset Microphones and, having previously experienced the quality of these microphones on other productions, I was more than happy to use them for the Italian tour,” Grassini says. “Their quality is absolutely phenomenal. They sound great, they are very resistant to high sound pressure levels and obviously, because they are so small and discrete on the actor’s faces, they are good for the audience because they don’t detract from the performance.”

The Adventures of Priscilla, Queen of the Desert – The Musical tells the story of two drag queens and a transsexual woman who travel through Australia on a tour bus called Priscilla. Along the way they encounter many different people and have a variety of hilarious adventures. The musical first opened in 2006 in Sydney, Australia, before travelling to New Zealand, the United Kingdom, Canada and New York's Broadway. Since beginning its run in Italy last December it has been to Milan and Rome and has notched up more than 250 performances.

“It is an amazing musical – full of colour and drama, and very funny,” Grassini adds. “However, it does involve a lot of costume changes and this is another reason why the DPA Headset Microphones are so useful. More than 500 costumes are used in this production and having a microphone that is comfortable for the actors to wear and very quick to remove does make it much easier to deal with the quick costume changes.”

Grassini has been a fan of DPA Headset Microphones for many years and has used them in numerous theatre productions in the past. “They always sound good and are just so easy to use,” he says. “In many situations they are simply ideal and, for me, the only microphone choice.”