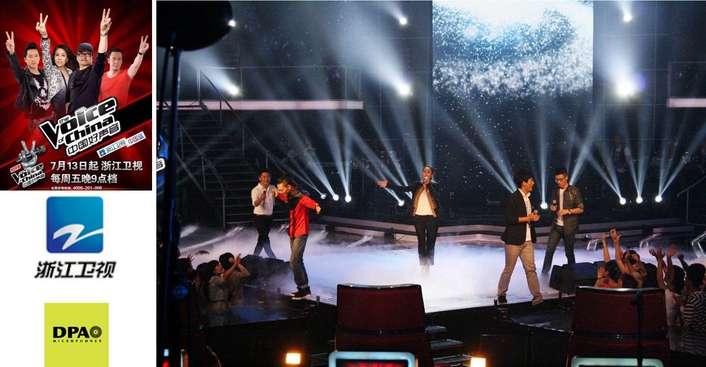 Judges and artists on this popular TV talent show relied on DPA’s hand held d:facto Vocal Microphone for their live performances
DPA Microphones’ new hand held d:facto™ Vocal Microphone made its debut on Chinese television this summer when it was used extensively during the production of The Voice of China, a show produced and screened by Zhejiang Satellite TV that topped the nationwide ratings.

Based on the same concept as NBC’s The Voice, the Chinese show featured four judges/coaches who used blind auditions to identify teams of singers they wanted to work with during the series. The prize for the winning artist, Liang Bo, was a recording contract.

Heading up sound production for the show was Mr Jin Shao Gang, a famous sound designer and one of China’s most important sound engineers. During an extensive and illustrious career, Mr Jin has worked with many of the country’s top recording artists and was also heavily involved in the opening ceremony for the Beijing Olympics in 2008.

Mr Jin used two DPA d:facto Vocal Microphones for the singers and also specified them for the judges when they sang with their teams.

He says: “I knew that DPA microphones were among the best in the world so I was very keen to try the new d:facto microphone. We tested two d:facto capsules with our Wisycom wireless systems and I was so satisfied with the results that I decided to use them for this show. The sound quality was exceptional – clean, natural and with splendid high frequency response and awesome ambient noise restriction. I was very happy with their performance.”

The show judges included renowned musician Liu Huan, who sang the Beijing Olympics theme song You and Me with Sarah Brightman; pop diva Na Ying; top Chinese artist Yang Kun and Harlem Yu, a singer-songwriter from Taiwan. DPA’s d:facto was also used by Taiwanese singer A-Mei, who was the guest artist in the show’s finale.

Pike Xin, Product Manager at DPA’s Chinese distributor DMT Pro that supplied all of the DPA microphones used during the show, says: “As professional musicians, the judges are familiar with many different microphones but they all really liked working with the d:facto. Indeed, Na Ying was so impressed that she went on to use a d:facto for her own concert, Na 20 Years, while Yang Kun has expressed an interest in buying one.”

To comply with Zhejiang TV’s brief to deliver the best sound quality, Mr Jin also specified DPA cardioid headset microphones for the judges to wear while they were making their comments on the artists’ performances.

Pike Xin adds. “Mr Jin also specified a number of DPA d:vote™ 4099 Instrument Microphones which were used to mic piano concerts by two of the artists taking part, Lang Lang and Li Yun Di. He was very impressed with these and plans to use them again in the future.” 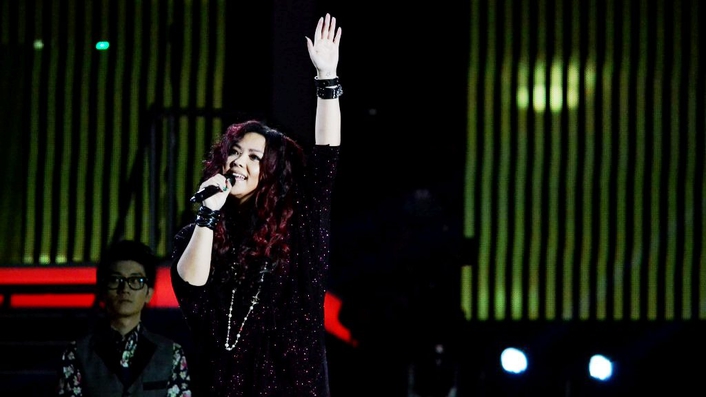 The Voice of China finals were broadcast live and in 5.1 surround sound. To ensure that the excitement of this spectacular finale was transmitted to the viewing public, Zhejiang TV audio engineers used a DPA 5100 Mobile Surround microphone, which was positioned in the middle of the audience so that it captured the entire ambience.

The Voice of China was so successful that it grabbed higher rating than any other Chinese music show this year, and even managed to beat foreign format shows like American Idol and You’ve Got Talent. Part of this success was down to Zhejiang TV, which upheld the principle of selecting really good voices and keeping a friendly and sober tone, which attracted viewers.

Chinese commentators are now hoping that The Voice of China will lead the way for more Chinese adaptations of popular western TV shows – and ultimately a successful home-grown reality/talent show format.

Clay Paky Sharpys Sing on NBC’s “The Voice”
Clay Paky Sees Top Rating...The Voice’ in Australia
CT Provides Vision to The Voice
It's All About the Voice