Birmingham, UK-based production company DMX Productions is increasingly turning to Elation Professional products to add a dynamic flare to a variety of shows and events. One example is an early summer UK tour by Punjabi singer Diljit Dosanjh that saw the Indian artist play a handful of dates in England including a show at London’s Wembley Arena.

Dosanjh is the world’s biggest Punjabi superstar, with anthems heard on dancefloors across the globe and a fan base to rival that of Justin Bieber. DMX Productions continued their relationship with Dosanjh and promoter Moxiebox by handling the complete production supply on their second tour with Dosanjh. The show was designed by SJ Grevett, owner of DMX Productions, who created a large 8m x 8m LED video screen as the centerpiece of the design with a surrounding lighting rig that included a large number of Elation moving heads and effect lights. 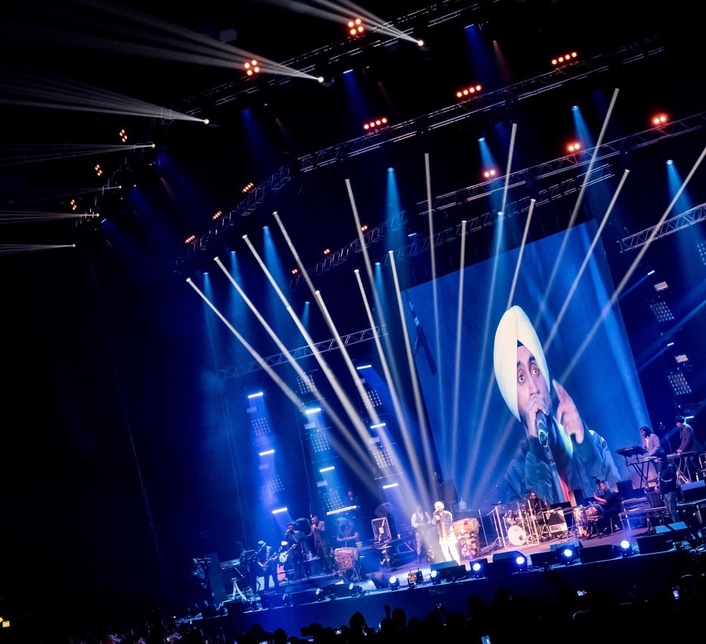 The tour required a real ‘wow factor’ with special effects (lasers, Co2, confetti, pyro) and spectacular lighting making up a huge part of the production. Mounted on overhead trusses were 12 SixPar 300™ LED Par lights used for multiple color looks and an “awesome UV wash,” according to Grevett. Also mounted overhead in horizontal trusses were 17 of Elation’s industry standard Platinum Beam 5R Extreme™ beam lights along with 13 Platinum Wash 16R Pro™ wash/beam moving heads, which Grevett says are “small and light yet extremely bright and punchy and also do a very tight beam.”

Working alongside matrix panel fixtures and filling out the backline right and left (8 per side) were ACL 360 Bars™ mounted on horizontal bars. The ACL 360 Bar is a color-changing LED batten in Elation’s ACL Series of high-output narrow-beam LED effect lights. Housing seven 15W RGBW LEDs and capable of continuous 360-degree rotation, the versatile fixtures can be used to add dynamic movement to a show as well as colorful beam or wash looks.

The stunning live concert experience included a full band and the kind of stage production that has never been witnessed before on a Punjabi tour in the UK, with Grevett’s design receiving universal praise. Dosanjh’s UK tour was the Punjabi superstar’s second, and all shows sold out.