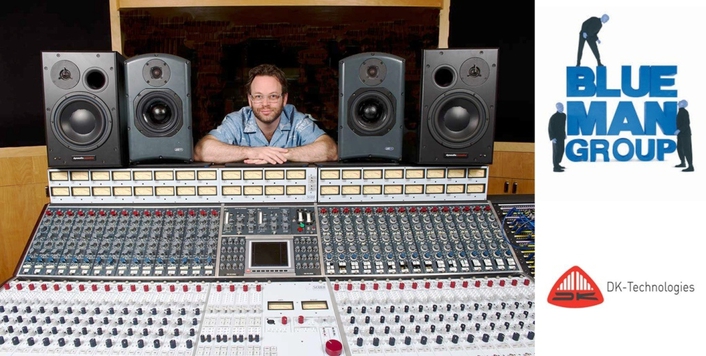 Todd Perlmutter with DK meter in Neve Console
Blue Man Group, the creative organization best known for its widely popular theatrical shows and concerts, has had a long history of originality and innovation. In addition to reinventing the theatrical experience and redefining cruise ship entertainment with its new production aboard Norwegian Epic, Blue Man group has also been well ahead of its time when it comes to recording technology.

As early as 1998 the organization was experimenting with surround sound mixing and it is currently working on a unique design for a multiple speaker output that may yet find its way into live productions.

Given this emphasis on the very latest technology, it is no surprise that Blue Man Group’s audio director Todd Perlmutter has chosen DK-Technologies’ flagship MSD600M++ audio meter for the Group’s recording studio in New York City. The meter has been installed in the centre section of a custom-built Rupert Neve console and is already being used for a variety of metering tasks, including surround sound mixing.

“The Blue Man studio deals with many different audio specs on a regular basis – everything from simple music production where you just want it loud, to a variety of television broadcast specs, cinema, live video production, radio, etc,” Perlmutter explains. “However, unlike most post houses, we still mix on an analogue console. In order to deal with all the different formats coming and going through the studio, I wanted a highly accurate audio meter and chose the DK-Technologies MSD600M++ because it also offered a very clear display for surround sound. It has turned out to be a great idea. We don’t do surround mixes daily, but we tackle enough of them that having a surround meter is very helpful, especially since we are using a console made to monitor stereo.”

DK-Technologies’ MSD600M++ Audio Meter is a modular, multi-channel audio analyzer that accepts up to 32 input channels. It has 4 configurable input slots and 4 output slots and can incorporate a number of different modules including Analogue, AES3 and SD-SDI formats. The instrument is very compact – everything fits into a box not much bigger than a pocketbook. In terms of display, the unit benefits from DK-Technologies’ exclusive JellyFish™ and StarFish™ surround indicators that have become the adopted industry standard because they present the surround sound image in a logical and intuitive way. The level and energy content of all channels is easily recognizable on the screen, while signal correlation and phase errors in individual vectors are immediately highlighted by different colours on the screen. 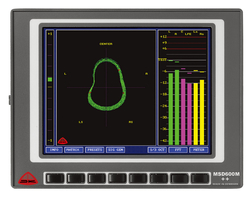 The Blue Man Studio acts as a hub for all things audio related that the organization is involved in. Founded in 1987 by Matt Goldman, Phil Stanton and Chris Wink, the Blue Man Group’s shows and concerts feature a mixture of music, comedy and multimedia theatrics that produce a totally unique form of entertainment. The Group - a trio of performers called Blue Men, who appear to have blue skin and no voice, hair, or ears - also release recorded music and tackle scores for film and television.

Todd Perlmutter and his team are about to start work on the soundtrack for an upcoming Blue Man Group IMAX film, Blue Man Group: Mind Blast, which gives the Blue Man an entirely new environment to explore. This is scheduled for release in 2011.

“Blue Man music lends itself to multiple speaker output much better than a four-piece rock band,” Perlmutter explains. “We may have a recording with 20 drummers and it’s great to split them up. We have recently been working on a multiple speaker output of our own design for possible use in our live productions. We have been working on a 24 channel system and our experiments so far have been spectacular. We are about to start production on the IMAX movie, and I am anxious to get that spec. We will probably write and record a few songs for it specifically with their multichannel system in mind.”

Perlmutter adds that the DK MSD600M++ meter has rapidly established itself as a mainstay of the studio, especially as integrating it into the Neve console makes it very easy to see.

“It’s in the perfect place – very similar to the way meters are integrated into an SSL console,” he says. “Since installing it, we have used it every day. We have already done a couple of surround mixes including a piece for Panasonic 3D TVs, and it has proved itself to be a very useful tool, especially when we want to check our output quickly and accurately.

“Speed is always an issue with us since we do so many different things in a day and need to change our setups often. The meter gives us instant information. It covers everything from quickly assessing phase for tracking, to immediately seeing when the audio we are working on needs mastering first - or even simply finding out we’ve got two left channels instead of stereo from someone. The ears would definitely tell us this, but not as fast as the eyes. Having a meter like this means we have access to a rapid source of useful knowledge, which in turn improves our efficiency.”

Currently, Blue Man Group theatrical shows can be seen in New York, Boston, Chicago, Las Vegas, Orlando, Berlin, and touring throughout Europe. The popular Japan show re-opened this year and a touring production of the theatrical show is soon to begin its journey around the US. Meanwhile, the Blue Man Group IMAX film is scheduled for release in 2011.