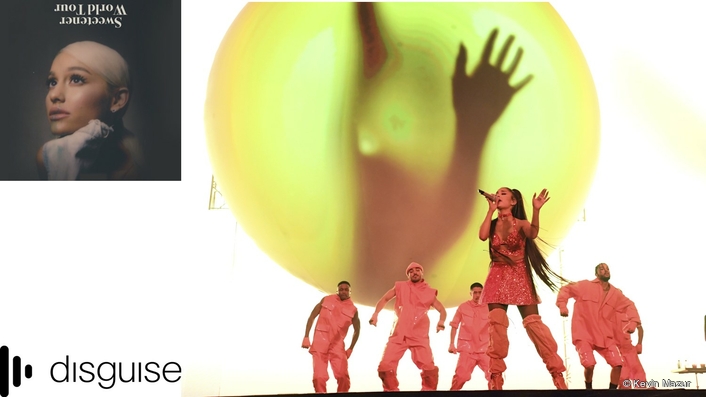 The tour supports the artist’s fourth and fifth studio albums, ‘sweetener’ and ‘thank u, next.’ It kicked off in March 2019 in New York and wraps in December 2019 in California, comprising three legs and a total of 102 dates in North America and Europe.

“The tour was designed to highlight the range and femininity of Ariana and create an ever-transforming space for her to perform her latest albums and give the audience an immersive experience to dive into as they witness Ariana's journey through her music,” says Loren Barton, Media Department Director with Lumentech. He has overseen the projection and media departments in support of many recent projects by Production and Lighting Designer LeRoy Bennett.  Possible Productions produced the motion graphics for the show, which sees the stage brought to life with visuals of space during the song ‘NASA’, the visuals then turn the stage into a planet, a moon and a galaxy. From conversations with Ariana herself, Michael Figge and his team at Possible created a stage theme for each song that reinforced the choreography and lighting. 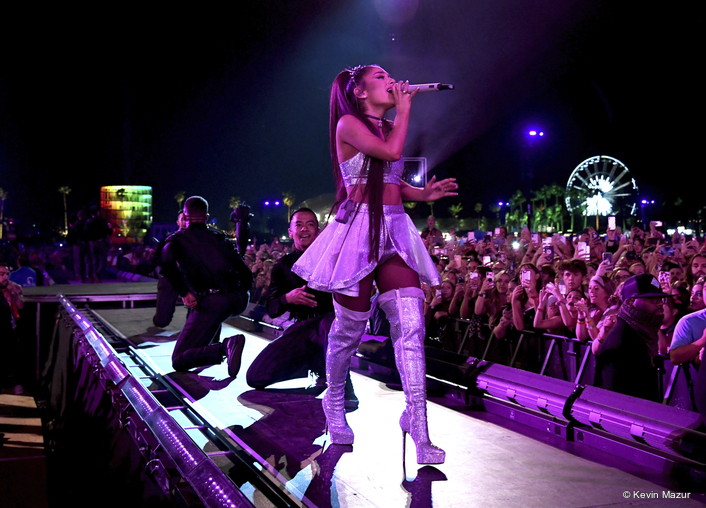 “The set is made up of three main features: an inflatable curved cyc wall with a protruding hemisphere in the centre, a horseshoe-shaped wrap-around runway, and a descending sphere that inflates fully when deployed,” Loren explains. “Unlike most pop tours, the decision was made early on to use projection as a light and scenic source for the show and have the lighting accent the music, key the dancers, as well as sculpt and feature Ariana with follow spots, balanced to much lower levels than traditional follow spots. Another key decision was to project onto the stage floor so that no matter what seat you have in the arena, the visuals and imagery of the show reach you and contribute to your experience of the production. The whole set is a canvas.”

Loren notes that the set design was adapted several times to meet the needs of the production before it was finalised. “The usual challenges of balancing the spatial needs of scenic, audio, lighting and projection took some re-configuring on-site once we had all of the pieces in the room together. Projectors and trusses needed to be moved as the final positions were chosen for the set.”

“The biggest challenge we faced was getting all 30 of the scenic projectors rigged, cabled, focused and calibrated on the three different scenic elements within a standard one day load-in time frame. The tight rehearsal time period meant we only had the entire set in one place for about a week. A great deal of research and development to manage the warping and calibration had yet to be completed. As a precaution, we had the inflatable vendor sew in a grid of small markers just below the surface of the objects to be used in our calibrations.” 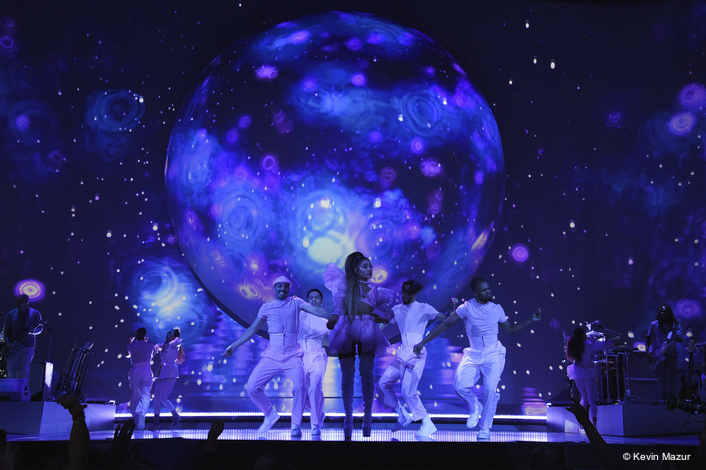 Once it was apparent that a large part of the scenic design revolved around projecting on 3D inflatable objects, OmniCal cropped up in conversations, making this the first concert tour that it had been used on this scale. disguise 4x4pro media servers along with OmniCal were chosen as the best solution for the show’s complex scenic design. John Wiseman and Nick Jackson of PRG LA supplied the disguise and video equipment for the tour.

“Given the short time we had to come up with a tourable calibration plan for these complex scenic objects, disguise’s new OmniCal solution was the best way for us to move forward,” Loren declared “The entire team is used to the disguise workflow, and we felt confident that we could deliver a repeatable, reliable and robust system that would allow the show to travel around the world.”

“In addition to the equipment and software, we also considered the people. We were incredibly lucky to have the leadership and insights from two of the top disguise engineers Ben Keightley and Zak Haywood as we embarked on this journey. Together we could not have pulled this off without the dedicated support of disguise developers and engineers. We all learned a great deal on this project about what it takes to really prove a new product and bring it to market, doing the final stages of testing in a live environment. I'm proud of what we accomplished together through all the challenges and celebrating our successes.” 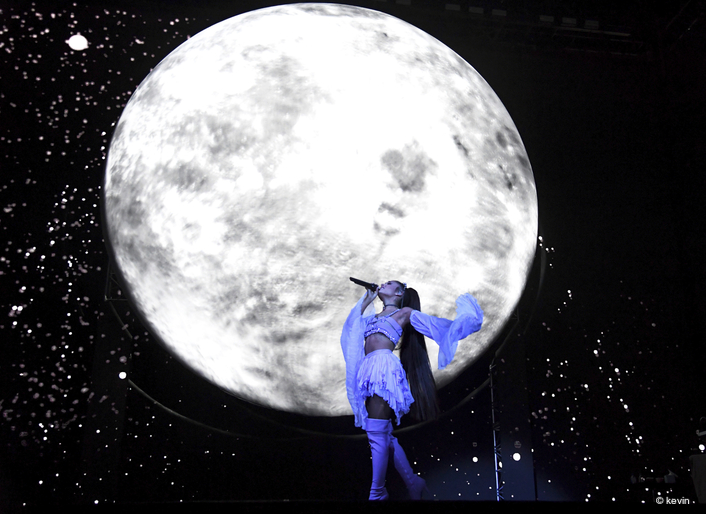 “Our project required two 8-camera machine vision systems working together to calibrate our three surfaces and connected to the same 10G network being fed into the disguise machines for processing,” he explains. “This relied on a significant network backbone high above the arena and the ability to focus cameras accurately without being able to reach them.”

“Our first order of business was to devise an OmniCal plan for our curved hemisphere wall object,” Loren explains. “For the entire show, this wall provides the backdrop and sets the tone for each song so it was our most crucial surface. The sphere was hit with an array of six projectors to give us all the angles we needed to cover the nooks and crannies of this irregular object. ”

“The next scenic system we were going to work on was the sprawling horseshoe stage deck that wraps around the VIP pit and back to the main stage. This object has some relief but is primarily a flat, custom decking system provided by Tait. We did several tests with cameras in various positions and elevations, testing different calibration settings and adding and removing cameras to our calibration plan.” 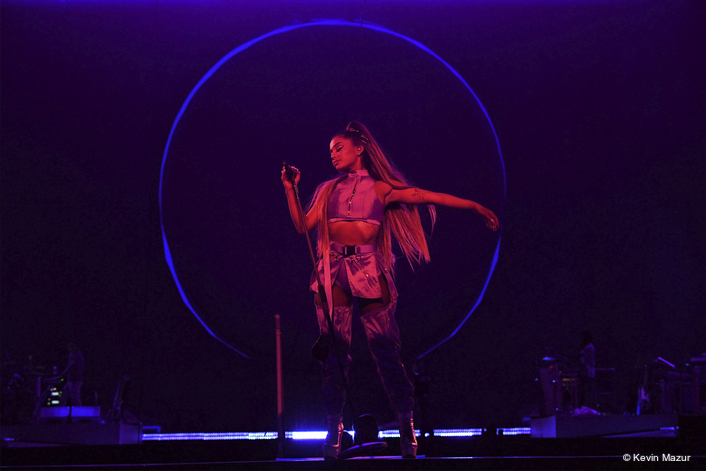 “We opted to utilise the natural seams between the decks and project the decking CAD plan back onto the decks to use as a lineup template and we eventually decided to go with QuickCal for this surface,” Loren notes. “This worked very well and, once our team was comfortable, calibration went pretty quickly.” 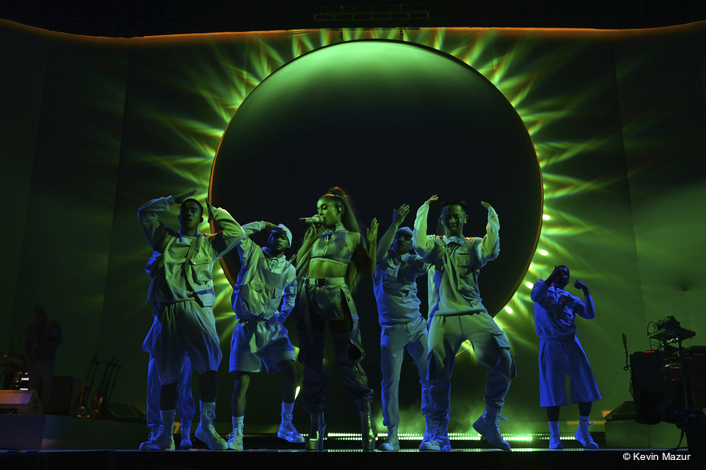 The 9m-diameter inflatable sphere was the last of the scenic elements to arrive at the rehearsal venue and by far the most complex object for projection. “We hadn't really ironed out exactly how the sphere was going to play in the show or how far down it could or would descend over the VIP pit,” says Loren. “Once these decisions were made there were some projection adjustments to make to enable us to reliably recreate the same look venue to venue. The biggest challenge was how to calibrate the 12 projectors that would be hitting this object with the 90 minutes or so we had to complete this task each day.” 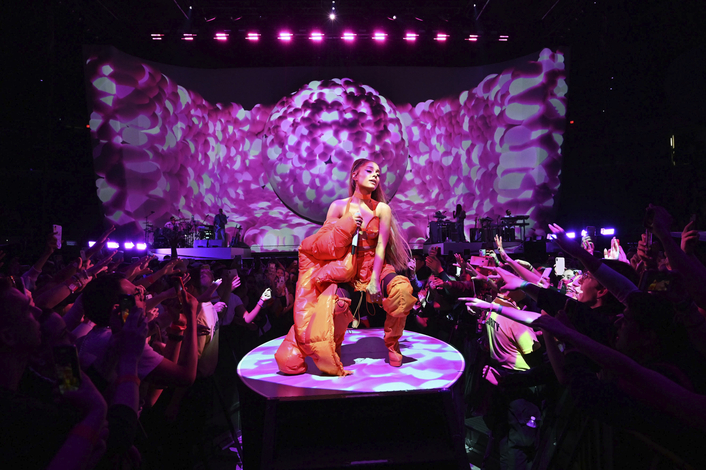 “After several tests with QuickCal resulted in longer than planned alignment times, the decision was made to attempt an OmniCal capture of the sphere. We manually refocused our calibration cameras and started our capture. After a couple of tries – and some helpful software and network tweaks – a 3D capture of the sphere materialised within the visualiser. The first time we played content on the calibrated sphere it was around 4am and it made the hair on my neck stand on end. We knew we had our solution, which was fortuitous timing as we loaded out of rehearsals later that day.” 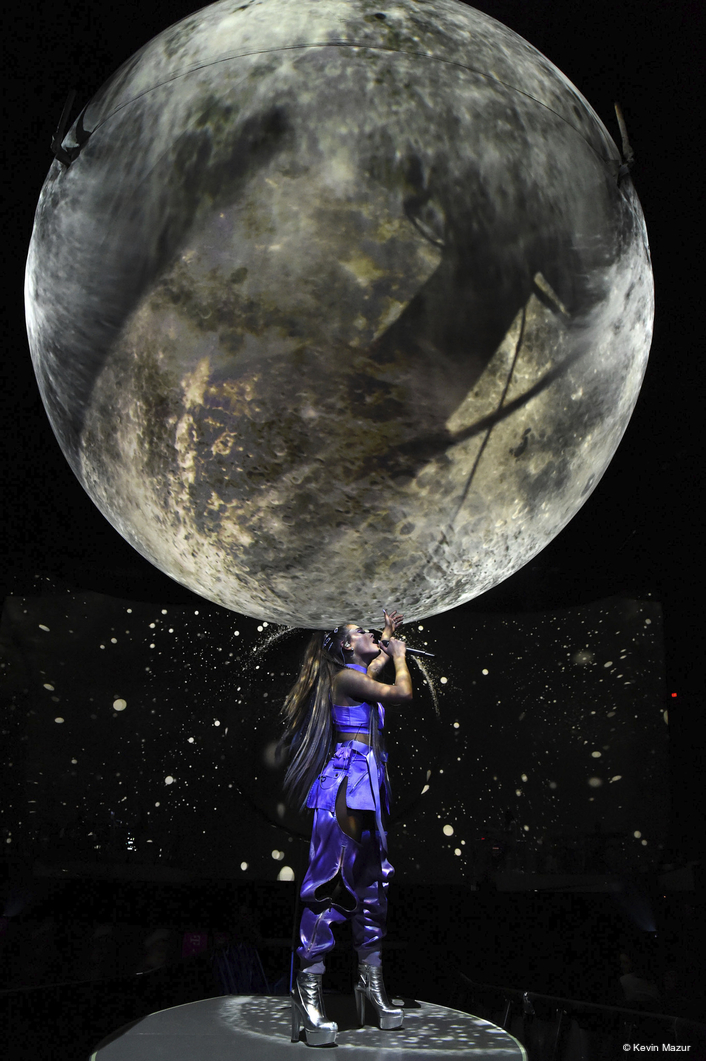 With the tour up and running, Loren and his team still had a few more discoveries to make to cut OmniCal calibration time to a manageable level each day. “One of the largest discoveries we made after analysing the data with the touring disguise technician JM Shulman and the development team was that the air handlers in each arena were causing just enough movement in the rigging to cause our cameras and set pieces to not hang perfectly still,” he reveals. “This was causing sometimes erratic results from venue to venue and compromising the quality of our calibrations. By turning off all air-handling equipment each day before calibrations we were able to get far more repeatable results.” 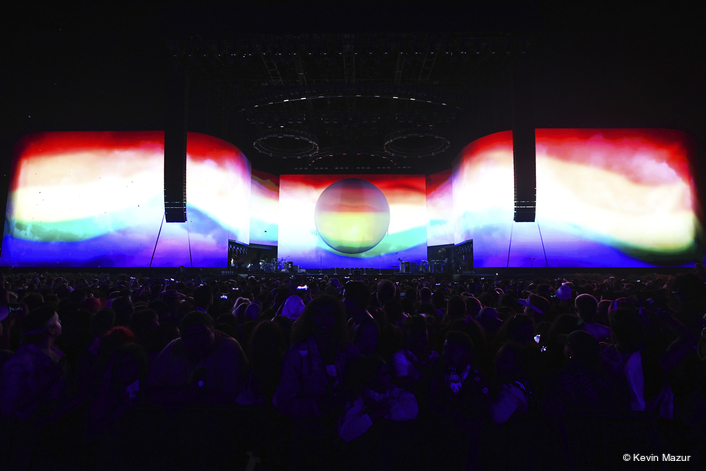 Loren points out that the 4x4pro systems were also key to media control for the show. “As with most disguise projects we do, SockPuppet ACN control was utilised for controlling the media on this project,” he says. “This allows for the lighting console to operate the show from city to city and cuts down on FOH space and extra equipment. It helps synchronise the effects and streamlines our programming time.”

He adds, “this tour has many ‘never befores’ that significantly push the envelope for the industry and for disguise.”

Jason Baeri is the Lighting Programmer/Director for the tour with additional programming by Harry Forster, Ben Keightley and Zak Haywood were the disguise specialists and JM Shulman is the disguise Touring Technician, and  Zito is the Production Manager.