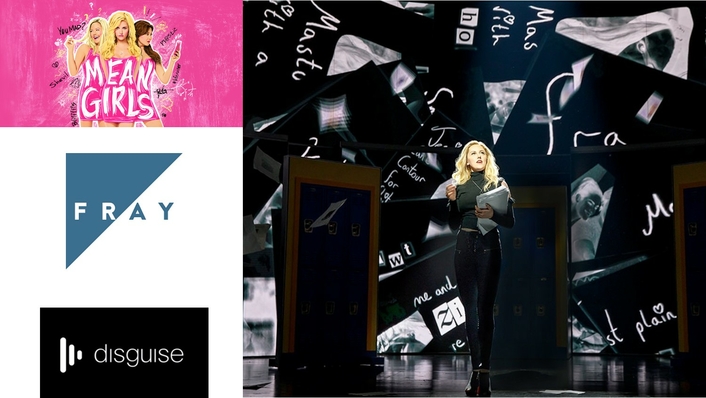 Mean Girls, The Musical has been playing at Broadway’s August Wilson Theatre since April 2018. It’s a fast-moving expedition through Tina Fey’s infamous story, which explores the impact of the ever-fluctuating pecking order of high school girls. Based on the 2004 cult teen film of the same name; it has been gifted a fresh life for the stage. The new production features a dynamic, video-led design that seamlessly changes playing locations. Such scenic agility is facilitated by one of the most ambitious uses of story-enhancing video content on a Broadway show.

Responsible for this video content is British video design team Finn Ross and Adam Young of FRAY Studio, who worked closely with the show’s director and choreographer, Casey Nicholaw and set designer, Scott Pask, to create the sophisticated and at times surreal world of North Shore High and its students.

The set comprises two stage-wide curved walls with sliding doors and panels. The top screen is set back to create a sense of depth and dimension. In addition, there are six LED screen legs that bleed off into the wings. 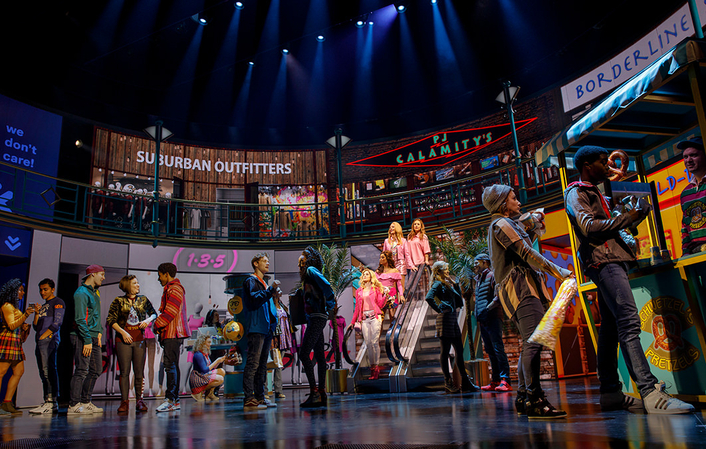 Images are delivered using five disguise gx 1 media servers, linked to 22 NovaStar NovaPro HD processors, and triggered by a combination of timecode and cues from the lighting and sound department.The content created in Notch is beat-perfect, complementing every change in mood, tempo and energy and ensuring that the show feels slick from beginning to end.

Video content switches scenic location with filmic dexterity from present day to the past - fantasy locations, basements, school corridors, a swimming pool, a party, canteens to classrooms – and that’s just in the first act. 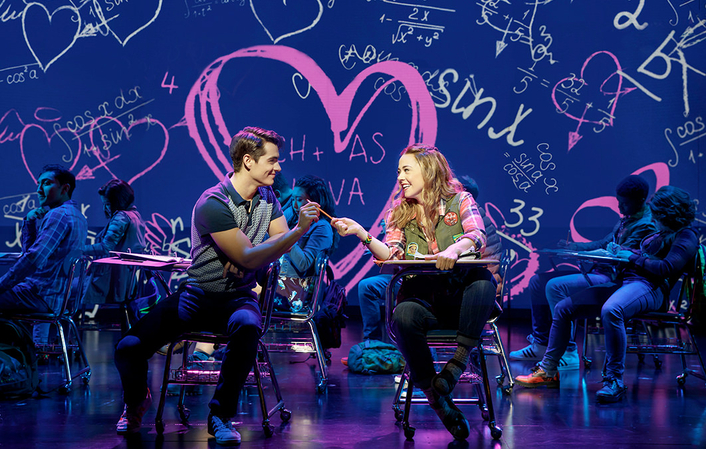 “Casey had a very clear and absolute vision for the stage design and Tina Fey’s script changes location so fast it’s often hard to keep up,” explains Finn. “Our design approach had to balance this speed. Casey sees video as a crucial element of the detailed choreography of Mean Girls, an extra layer of narrative, so content has to move and change to the same beat and count as the performers, yet still convey a believable environment.”

The challenge didn’t end there. Casey wanted to see the entire show visualised and cued to the count of the music before rehearsals began. The key to achieving this was the use of the disguise 3D visualiser system, which enabled FRAY to clearly communicate their content ideas to Casey and Scott in real time. 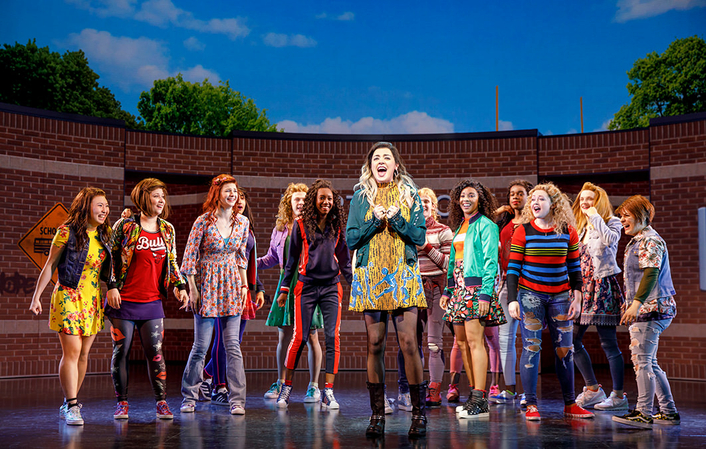 “Casey knew exactly how many bars it was going to take to get props or people on, around and off the stage,” explains Finn. “The visuals had to sync perfectly to that pacing. By using the disguise visualiser on a laptop, we could show Casey exactly how the stage video would look from any seat in the house, at any point, in any scenic state.”

By the time the cast began rehearsals, FRAY had the entire show’s content rendered and visually plotted: “Finn was in New York in rehearsals, while I was in London animating,” explains Adam. “We completed the second tech stage by the time we went to Washington for the technical stage rehearsals. This process gave us more time to fine-tune the detail of every scene, something we’re very proud of. We owe Casey a huge credit for that. I don’t think I’ve encountered a director who knew more clearly what they wanted. He’s inspirational to work with.”

FRAY’s attention to detail delivers naturalistic environments for every one of the locations they created and despite the huge number of scenes there is a clear continuity of style that keeps the audience mesmerised. “Every space we fashioned had to be compelling and evocative. Whether imaginary or real, the environments had to make sense; each had to have a consistent style that believably linked all the scenes together, which was absolutely key to the success of the show.”

“When we first saw the model box we knew that the video surfaces had to be LED rather than projection,” Finn continues. “We wanted to use colours and tones that would be unavailable with projection and we needed levels of brightness that would easily compete with stage lighting. This allowed us to create increasingly subtle content such as dark brick walls, dark blue night skies and moonlit gardens, while still having the impact we needed on stage.”

For FRAY Studio, disguise is a crucial tool that allows them to bridge the gap between the creative and technical while syncing video content so it can be triggered across a network of timecode, light and sound: “These days, working with disguise is second nature for us,” says Finn. “Mean Girls is not as complex as other shows we’ve designed. However, it was quite a jump for us to move into designing and programming for an LED surface as opposed to projection.”

Finn and Adam say that disguise also allowed them to clearly communicate the real-time video concept and timing with other members of the creative and production team as well, such as lighting, staging automation and sound: “We were able to render out a stage feed of the content for each number and send it to the other designers on the team, so they could visualise what would be happening during the show at any one time. This meant lighting could prepare basic lighting cues, and sound could work out when effects should happen.” 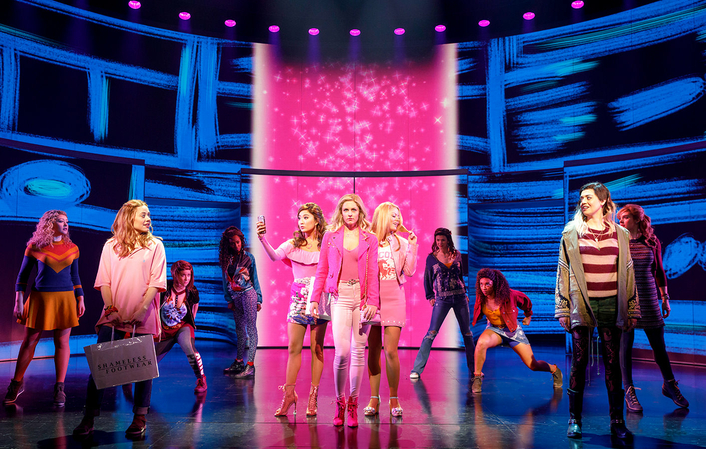 FRAY also say that the line of communication they have with the support and development team at disguise is a big influencer on the tools they choose to use: “The support we receive from disguise has been unwaveringly excellent,” says Adam. “If we run into problems which, when you are pushing the technical or creative boundaries as we do, is inevitable, it’s good to know that someone has your back. The disguise team are genuinely interested in developing the application and that’s reassuring for us. They invest in what we’re doing and will often help to make a mad idea work.”

“disguise has taken the stronghold when it comes to video content design and management in theatre,” concludes Finn.  “We would have struggled to progress through the content design as fast or as early as we did without Casey being able to see it in real time in the 3D model. It made our ideas more tangible and compelling for him, plus it reassured us that we were on the right aesthetic track. If a piece of content or a transition was too slow or too quick, I could amend it there and then. We could then rewind and run it again. We just kept doing that until he was happy.”