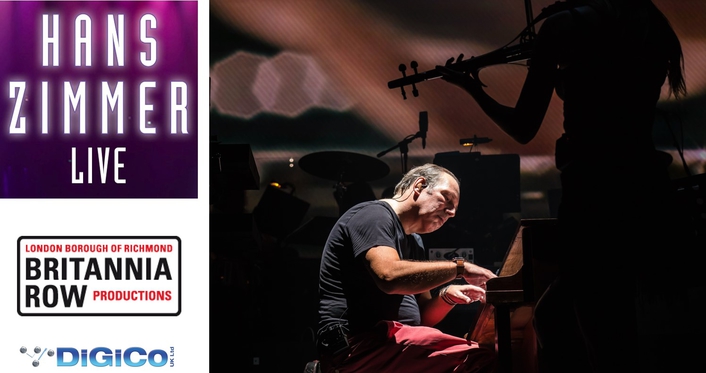 The tour has already covered the West Coast of America, Australia and New Zealand, Scandinavia, Eastern and Western Europe and is now travelling around the United States

Hans Zimmer is one of the world’s most renown film score composers. He has written over 100 scores, including those for Rain Man, Driving Miss Daisy, The Lion King, Gladiator, As Good As It Gets and The Last Samurai and has been nominated for seven Golden Globes, seven Grammys and seven Oscars. It is medleys from this incredible collection of work that the music for his current tour is selected. The audio design for the show evolved during preproduction and rehearsals, but what was clear from the start was that the console channel count was going to be immense, and that the only consoles that could handle it were DiGiCos.

The tour’s audio control system was designed by Britannia Row’s Lez Dwight in conjunction with Front of House engineer for the tour, Colin Pink, and monitor engineers Gavin Tempany and Jimmy Nicholson.  They chose two SD7s and an SD11. These, along with the rest of the audio system, were supplied by Britannia Row Productions.

“There’s a 19-piece string and brass orchestra and a 16-piece choir,” says Colin, “but because Hans jumps around genres so much, there’s also a band and a lot of electronics involved which gives me a grand total of 262 inputs. There aren’t many desks that can deal with that input count and we needed great flexibility in the system, so we went for the DiGiCo SD7 because of its functionality and great channel count.” 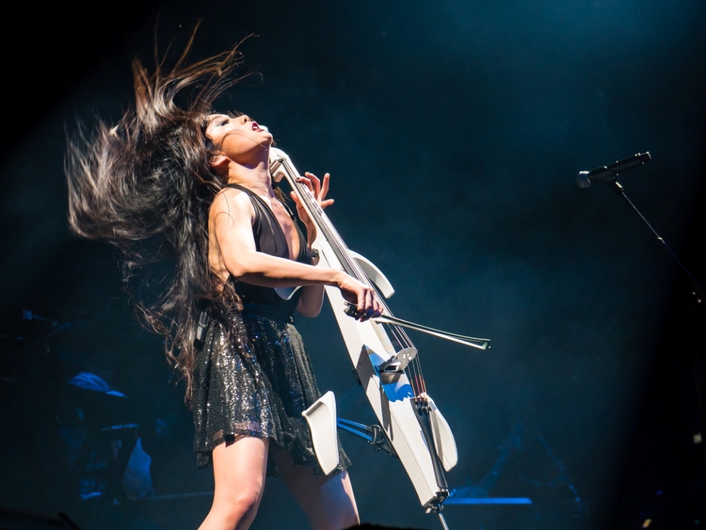 The different musical genres, with big changes happening quickly in the middle of pieces, make the style of mixing more akin to a theatre production than a concert, for which Colin has found the Snapshot facilities on the desks very useful.

“Using individual fade times on channels means you can transition from one piece to the next,” he continues. “I like to free myself up to listen and mix detail by using the automation to do all the boring stuff, the resetting, etc, and the DiGiCo software works very well for that. We are triggering all the Snapshots from time code, which frees me up and gives me more time and brain space to deal with the mixing of the show. 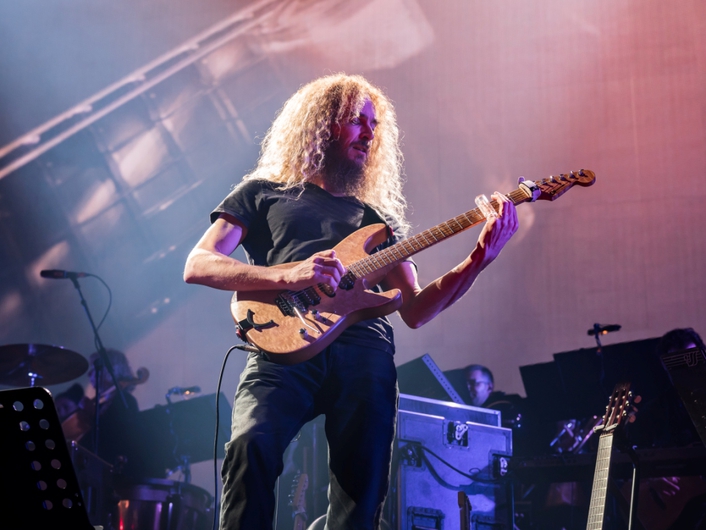 “From a mix point of view, when you deal with high input counts, the 12 faders in the central section with another 12 faders above are ideal as I can have 24 Control Groups within very easy reach. It makes mixing the show a joy and means I have whatever I need immediately accessible. The extra functionality and speed of the StealthCore2 software has also helped us refine the show and given us the ability to improve on the sound from last year’s tour.”

The other SD7 sits at monitors with Gavin, whilst the SD11, operated by Jimmy, is used for sub mixing the choir and the orchestra. Three SD-Racks handle all the inputs on stage with MADI used for playback of special effects, layers, etc. All of this is on the same fibre loop and can be picked up wherever it is needed.

“Because of the amount of people on stage, we wanted to keep it as silent as possible, so everyone is on IEMs,” Colin adds. “We have live drums and a bass cab, but that’s all you hear acoustically, so there’s very little spill into the choir, orchestral and woodwind mics which gives us the separation we need.”

But there was an issue. Gavin has 40 mixes to deal with at monitors and these outputs reduced his input channel counts, so he could not accommodate all the inputs needed. The solution was for Colin to take the inputs at FOH, except for stems of the choir and orchestra, which he gets from Jimmy. 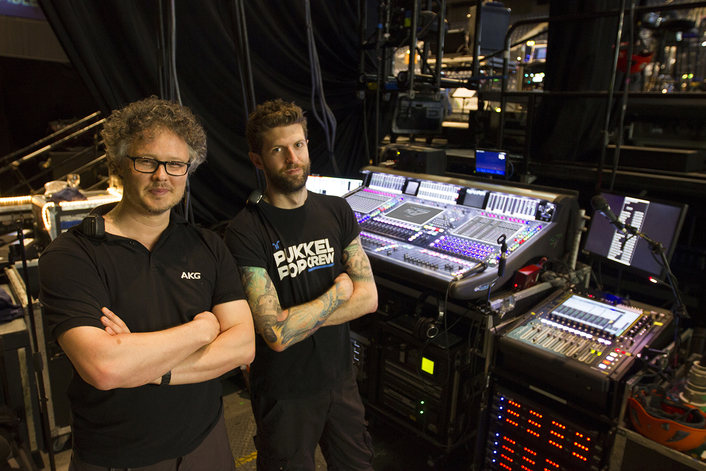 “Gavin has all the main band inputs, but I send him some stems from FOH,” says Colin. “The DiGiCo software makes that easy and straightforward and gives a lot of flexibility.”

“As well as the band, I handle a sub mix of the playback and the shout buss,” Gavin adds. “There are 23 musicians and some of them, such as the drummer, have multiple sends. He has a little personal mixer and he alone takes up ten of my outputs. Despite the SD7s high channel count, I ran out of busses, which is why some of them come from FOH via the optical loop. For some of these I copy the audio straight to an output, which does not use any additional DSP.

“My colleague Guillaume Burguez is the stage patch technician and funnel of information from the band, and with 181 mics on the stage he is absolutely essential. We talk over our shout buss all the time. He’s out there on stage as he was here last year, so he knows exactly what’s going on.”

Gavin is a fan of lots of screens on a console, so for him being able to have 24 output busses right in front of him on the SD7 is ideal.

“It means I don’t have to keep flicking pages to be able to do things,” he smiles. “The automation is also very good and chases time code, which is good as the whole show is run from time code; we sometimes have guest performers and just putting one guest and their associated effects into 20 plus mixes, even if you’re really quick, would still take 30 seconds and by that time, you’d be half way through a song.”

Gavin has also found the SD7’s video screen useful as from his position he has no view of the stage. “There’s also a function where I can inject the talk channel into any of the mixes, so if want to talk to one of the players it’s very easy to pull up their mix and hit a button,” he says. “Then I can talk to just them and not disturb anyone else.” 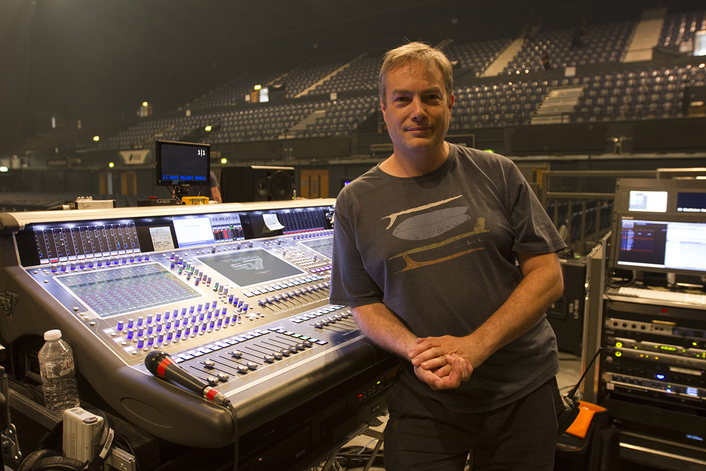 “With 57 inputs the SD11 isn’t quite maxed out, but all available busses have been used, with nine stereos, including what would normally be the left/right master buss, eight stereo groups and eight mono IEM feeds that go to a headphone out distribution system for the choir on the stage,” says Jimmy. “The SD11’s Control Group Faders and Control Aux Sends have made the orchestra headphone mixes easy - when a member of the choir asks for more of a particular section, rather than cuing their mix and pushing up all four horn faders, for example, the Control Group means moving just one fader - and Macros give me the ability to solo all output busses for the stems, as well as the tracks that come from FOH, so that I can hear what the mix will sound like once it is summed.

“It’s nice to be able to programme it all and helps a lot with the fact that there are only 12 faders and multiple layers,” he says. “The fibre loop is a great help, too. It means that everything’s done internally. It would be a much messier gig if we didn’t have that and there’s much less to go wrong.”

The tour has already covered the West Coast of America, Australia and New Zealand, Scandinavia, Eastern and Western Europe and is now travelling around the United States. The DiGiCos will be with them all the way.