14-18 starts its second run at Nekkerhal on 5th September
Set during the First World War, 14-18 - The Musical is a very ambitious musical theatre production. With the 1900-strong audience sat on a moving bleacher within a vast set, an innovative audio design was key to its success. A DiGiCo SD5 digital mixing console was the logical choice for co sound designer Guido Olischlager.

Set in Mechelen’s vast Nekkerhal, an hour west of the Belgian capital Brussels, the show is produced by entertainment company Studio 100 and features a set the size of two football pitches. The mobile bleacher moves the audience up to 150m within the set, so a complex audio system was needed to ensure fidelity of sound throughout the show. This required a versatile mixing console that had large i/o capacity. 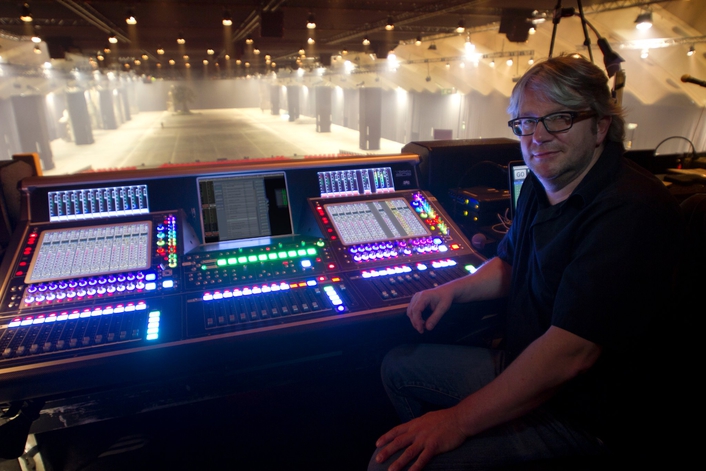 “We chose DiGiCo because it’s one of the favorite brands of all three audio guys involved - myself, Marc Luckx (sound designer) and Thomas van Hoepen (operator),” says Guido. “Critically, the SD5 is also one of the few digital consoles that can take this many inputs, outputs and mixes and it can also mix surround sound, which is a feature of this show.

“Another advantage of the SD5 is that it meant we could also use Optocore. Because of the moving bleacher, we needed a 350m Optocore network, with optical MADI running from the TiMax system distributed to the system amplifiers.”

The audio system features 36 arrays of Coda Audio ViRAY, 18 flown subs, 8 FX subs and seven front fills to cover the moving bleacher, 44 flown full-range units for monitoring and surround sound, 12 stereo in-ear monitoring mixes, an induction loop system for audience members with a hearing impairment, plus technician comms. With 140 inputs and the SD5’s 32 in / 24 out matrix used to capacity, it's a show which places considerable demands on the mixer.

“The SD5’s fader starts is a very nice feature for monitors in musicals, because it allows the monitor level to be a set pre-fader. When we have to bring the faders down during the show, we can do it without adjusting the monitor levels. That is a really big plus,” says Guido.

“If you’re following post-fader and an actor  talks too loud, his level goes down in the monitors and so he talks louder again to hear himself - meaning you’re fighting against each other. With the SD5, we’re setting a level for monitors and then opening and closing faders independently - no problem!”

Guido and his team tweaked the SD5’s software to their precise specifications, with support from DiGiCo’s Netherlands distributor, Jaap Pronk of TM Audio. “It was very helpful to speak to Jaap. It meant I could speak Dutch with him and we could adjust the desk to precisely how we needed it,” says Guido.

14-18 starts its second run at Nekkerhal on 5th September.