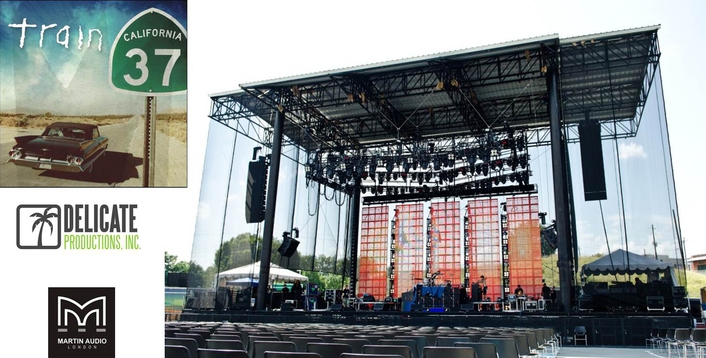 .
Train has wrapped up the sold-out California 37 tour on the heels of the sixth studio album of the same name that has already produced the certified platinum single Drive By and 50 Ways to Say Goodbye.

Based in San Francisco, Train consists of a core trio comprising Pat Monahan (vocals), Jimmy Stafford (guitar) and Scott Underwood (drums). Over the years, the band has produced successful albums such as their eponymous debut Train with hits including Free and Meet Virginia; Drops of Jupiter, which yielded the Grammy award winning single Drops of Jupiter (Tell Me); My Private Nation with their third Top 20 hit, Calling All Angels and Save Me San Francisco in 2009 with the catchy, ukulele-based Hey Soul Sister, a quintuple platinum hit and Grammy Award winner.

The California 37 tour has ranged throughout North America in a variety of venues including amphitheatres, arenas and theatres. Delicate Productions of Camarillo and San Francisco, who has already successfully deployed Martin Audio’s award-winning MLA (Multi-cellular Loudspeaker Array) system with Selena Gomez, relied on a system for the tour that consisted of 11 MLA and one MLD (downfill) enclosures per side and 12 MLX subs. These were supplemented with 16 Martin Audio W8LC and six W8LM cabinets for side and front fill.

Commenting on MLA, Delicate president Jason Alt said, “Everything has gone very successfully with the MLA system. The only show where we had to add more boxes was Red Rocks where we went to 16 MLA per side instead of the usual setup because of the size of the venue.”

Asked if the different type of venues provided a challenge in terms of getting the control and coverage Delicate needed, Alt responded, “Not at all. The MLA system actually performs really well on every level in every kind of venue that Train has played. All of the reports we’ve gotten back from our crew about reactions to the system from the band and their engineers have been extremely positive.”

Expanding his comments, Alt added, “MLA is a really good solution, especially its small truck footprint that gives you a definite transportation advantage for tours that need every square inch of space they can get. The technology has really given us an edge because it is such a distinctive product in terms of its capabilities and flexibility. We feel MLA gives us a bit of an edge when we’re bidding on new projects.

“Clients are starting to be very aware that the flexibility of the box and its controllability and rejection capability is what a lot of artists are looking for. With MLA, there’s not a lot of energy on the stage, which makes it better for performers and improves the audience’s listening experience.

“And the MLA owners’ network in the United States has been a real asset as well,” Alt concludes. “We’ve all been able to work together sharing resources, equipment and technical information, something which has proved to be a major benefit for every one of us.”