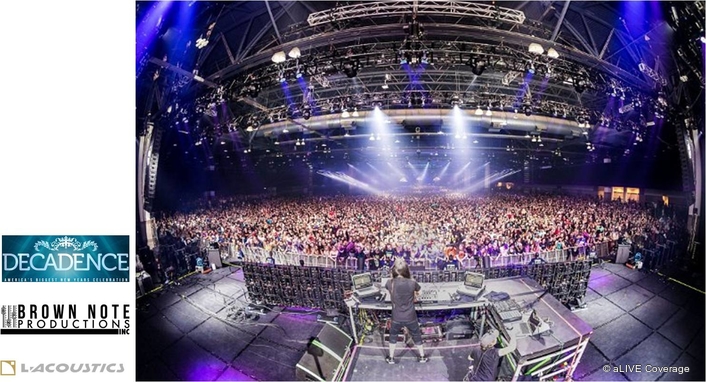 Bassnectar was one of Decadence’s headliners in Hall A on the first night of the Denver event, reinforced via BNP’s L-Acoustics K1/K2/Kara system

On most days, the Exhibit Hall at the Colorado Convention Center in downtown Denver might appear to be a typical, conservative environment for exhibitions, trade shows and other corporate events. However, for the final two nights of 2017, Global Dance, AEG Presents and Live Nation Concerts helped transform the venue into Decadence: City Beyond Tomorrow, billed with simultaneous events in Arizona and Utah as “America’s Largest NYE Dance Celebration.”

Attracting approximately 18,000 electronic music fans on both December 30 and 31, Decadence hosted performances from some of the biggest names in EDM, including Armin Van Buuren, Bassnectar, Big Gigantic, Diplo, Galantis, Gramatik, Justice, ODESZA, Porter Robinson, Zedd and nearly 20 other top acts of the genre. 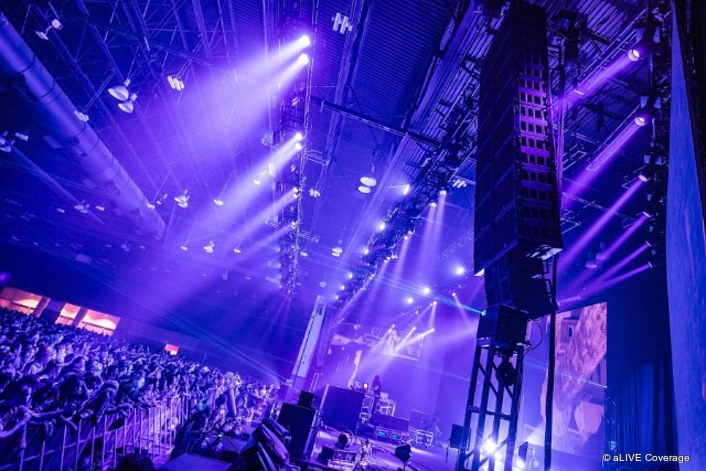 One of Brown Note Productions’ K1/Kara arrays in the Colorado Convention Center’s Hall A for Decadence: City Beyond Tomorrow

Primary arrays for each hall were comprised of eight K1 enclosures over three Kara downfills per side, complemented by a sub arc of 32 KS28 in 16 stacks of two. Eight Kara plus four ARCS II were deployed across the stage as front fills and VIP section fills, while six more Kara plus four SB18 subs served as the now industry-standard DJ fill system. Power and processing for all systems were accommodated by 36 LA12X amplified controllers housed in a dozen LA-RAK II touring racks.

With each hall being 720 feet deep, two waves of delays were also utilized—the first at 168 feet out, and the second at 264. These featured left and right delays of six K2 per side, with three K1-SB flown immediately behind each array.

“Because Halls A and C were so deep, Decadence’s promoters asked us to increase the size and SPL of the delay arrays,” says Brown Note’s Ryan Knutson. “By flying the K1-SB behind the K2 delays, we reinforced the LF contour, freeing up more resources in the low end to achieve the desired contour without having to tax the LF resources of the arrays. The K1-SB really gave the mid to rear sections of the rooms the added LF SPL required to help the fans be fully enveloped in full-range audio throughout the room.” 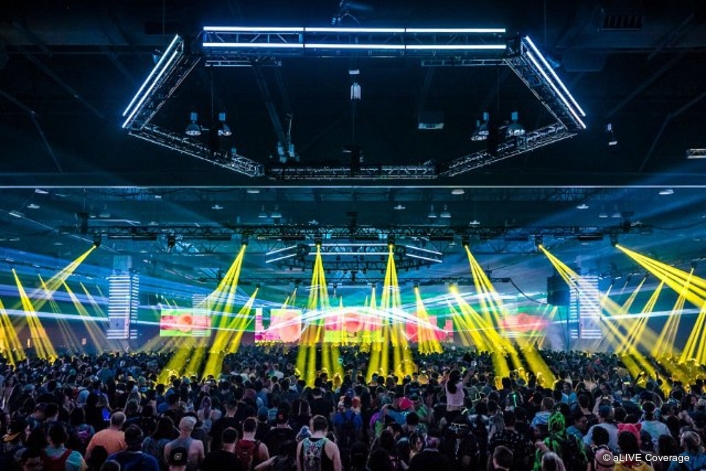 Approximately 18,000 people flocked to the Colorado Convention Center on both December 30 and 31 to see the world’s top EDM DJs perform

EDM artists and fans obviously love their low end, which was more than generously supplied by Brown Note’s LA12X-powered KS28. “Our deployment of KS28 really reinforced the low frequency content provided by the artists over the two nights,” adds Sara Knutson. “We never had issues having enough low end or running into gain reduction for long periods of time. The sub arc offered the width we needed to cover the wide rooms and there was a noticeable increase in bandwidth from the previous year’s deployment.”

Across the board, everyone—artist, promoters and audiences—was satisfied with the event’s sound. “The best compliment from the artists was that we didn’t have any comments,” Ryan laughs. “The monitor and PA packages were so good that none of them had to ask for any modifications. And the promoters were all really pleased as well. Eric Pirritt, the president of Live Nation Colorado, told me ‘Every inch of that place was covered in perfect sound—it was groundbreaking!’ To get a comment like that from someone who has heard the number of shows that he has certainly says a lot.”