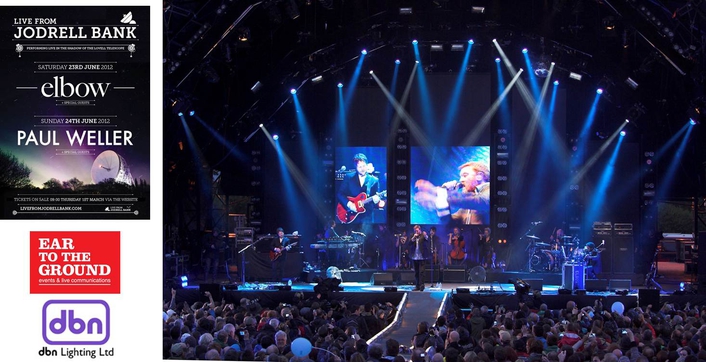 A runway from the stage out into the audience was lit with two low powered follow spots
Manchester's favourite lighting and visuals rental company dbn supplied stage, DVD, audience and architectural lighting for Elbow's acclaimed show at the Jodrell Bank Observatory, home of the magnificent Lovell Radio Telescope.

This was part of the 2012 'Live at Jodrell Bank' event, produced by Ear To The Ground, and followed on from dbn’s supply of the first ground-breaking event on this hugely atmospheric site last year.

DBN's Nick Walton project managed, and also created the production lighting design based around the specs of the two headline acts of what was scheduled as a two day event - Elbow (LD Cate Carter) and Paul Weller (LD Dan Hill).

Unfortunately the second day was pulled on the morning of the show - and after a full overnight session of lighting programming - due to horrendous weather amidst the wettest June in the UK since meteorological records began.

The stage was an 18 metre Orbit roof, for which dbn sculpted a sub-hung truss system with corners and hinges to maximise every last centimetre of height to ensure that Elbow's onstage LED columns had full impact and clear sightlines. They packed in five horizontal trusses and two more running front to back each side. The far upstage truss was utilised for soft goods and the one immediately in front of it to fly Elbow’s LED screens.

For moving lights, dbn supplied 24 x Clay Paky Alpha Wash 700s and 16 of their new Alpha Spot 800 QWOs, plus Martin Professional MAC TW1s on the front truss. Cate Carter was delighted to get a chance to give the QWOs a good run!

In addition to these, the generic fixture count included twelve 4-lite Moles, eight Atomic strobes and ARRI Junior 2k fresnels. The fresnels were on the front truss, used to provide a flat stage wash and brighten up the environment for all the acts performing during daylight.

The house lighting desk was an Avolites Pearl Expert, run by dbn’s Nick Buckley, and Carter brought in her own Chamsys MagicQ for Elbow's set.

This entailed the installation of Slick ground supported towers either side of stage to give audience lighting positions for 20 x MAC 2K XBs. The periphery crowd lighting was boosted with the placement of PARs around the perimeter fence, and HQI units were strategically placed to light the trees and foliage - all controlled off a Road Hog Full Boar console operated by Peter Barnes, working closely with DVD lighting designer, Brett Turnbull.

A runway from the stage out into the audience was lit with two low powered follow spots (at the request of Elbow who like very subtle and carefully considered front lighting) and the whole ramp was further enhanced  with 40 Sunstrips around the edges of the thrust in the footlights position.

These were weatherised with layers of frost and colour correction gel, stapled down tightly to exclude the water in their very exposed positions. 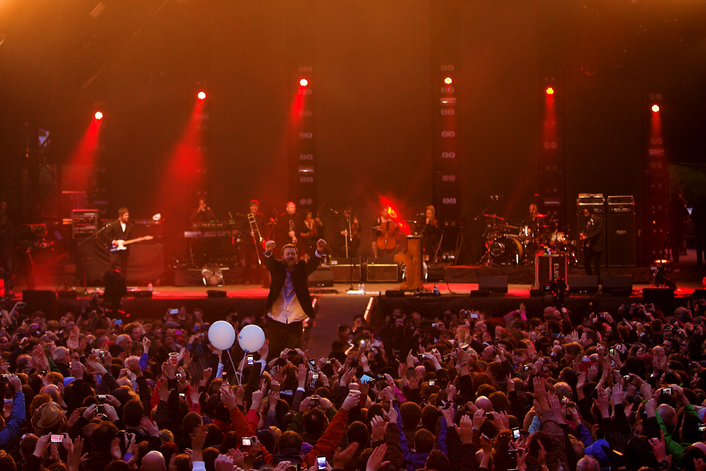 Says Nick Walton, "It was a real pleasure to be part of the event again at this amazing site, and everyone involved worked very hard and harmoniously to make it happen smoothly".

The Elbow gig went ahead despite appalling weather which didn't dampen anyone's spirit or enthusiasm for the occasion in one of the most magical and charismatic site-specific event venues in the UK.

XL Video Gets The Elbow at Jodrell Bank
Elbow – Live in 3D: Con...cast with DaVinci Resolve
dbn gets Lucky on Norwegian Lotto