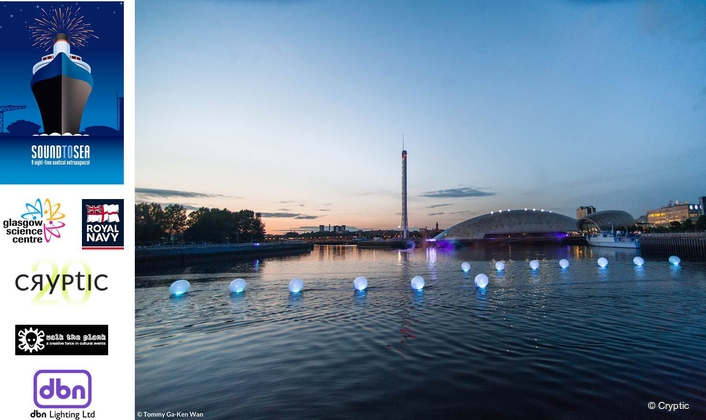 .
Lighting and rigging specialists dbn were asked by Glasgow-based arts organization Cryptic to collaborate on creating ‘Sound To Sea’, a very special night-time nautical extravaganza presented in partnership with Glasgow Science Centre, and in association with Walk The Plank, All Or Nothing and The Royal Navy, staged at the Canting Basin on the River Clyde in Glasgow.

This vibrant and ambitious site specific work, directed by Cathie Boyd, celebrated Cryptic’s 20th anniversary and was part of the arts programme accompanying the 2014 XX Commonwealth Games in the city, which culminated the same weekend.

dbn’s Stephen Page was commissioned to design and develop a lighting scheme for the show, due to the company’s extensive experience working on dynamic outdoor multi-faceted performances like this. 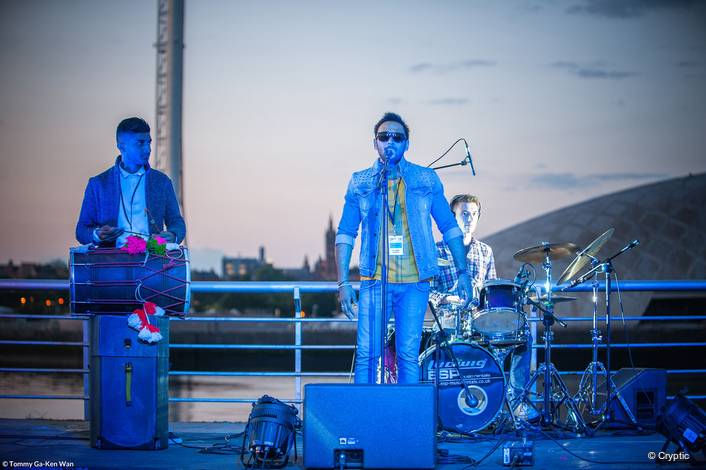 The performance encompassed several live artists and bands, aerialists, pyro effects, around 140 performers and no less than fourteen ships which were part of a magical kinetic set, some moving around the dock during the performance.

The scale of the site was huge – from the top of the Science Centre roof, where the aerialists performed, to the boats maneuvering in the dock, reaching right along to Glasgow Tower at the end of the Science Centre, which became a striking end-stop to the action, with carefully choreographed pyro sequences fired in and around it. 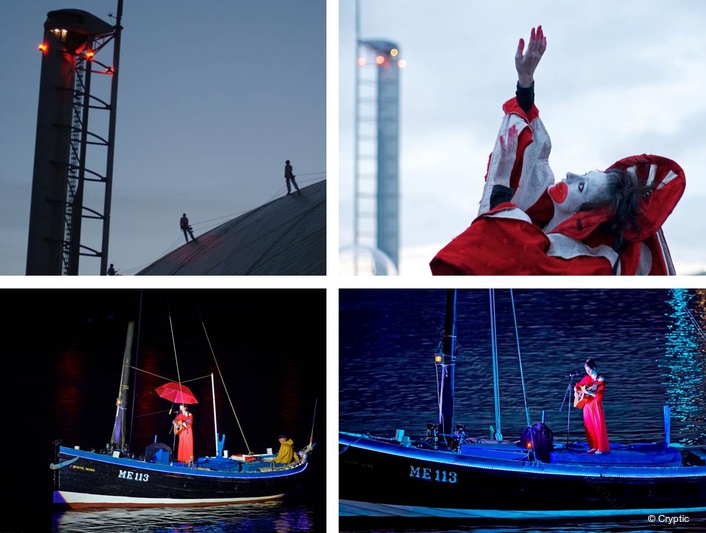 It was the expansive and varied nature of this temporary theatre environment that was the biggest challenge for Page when lighting the show. The solution was to position lights in just about every conceivable position around the space!

At the top and bottom of the Science Centre roof were eight strategically deployed SGM P5s – 16 in total – with two Studio Due City Color LED also shooting up from the floor either side. 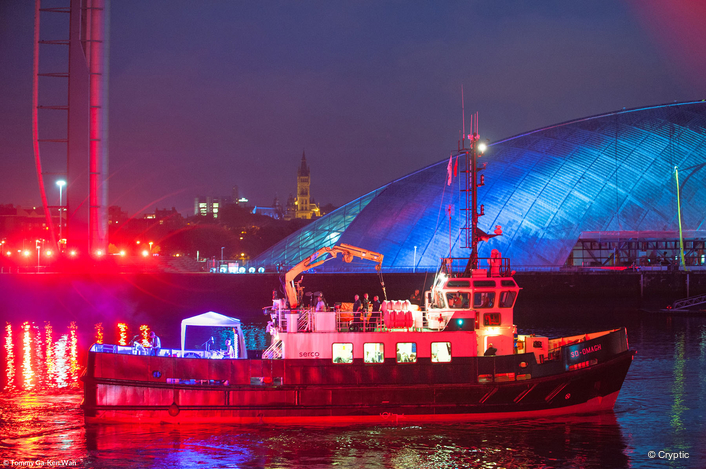 The large dock basin and hub of the performance was directly in front of the Science Centre which had 16 x Alpha Beam 700s positioned around its perimeter, used for creating an eye-catching backdrop to the boats and performers. They also doubled up as reinforcement for illuminating the Science Centre roof.

The shape and makeup of the Science Centre roof was another galvanizing element with its distinctive titanium-clad crescent shaped structure acting as a backdrop to the event, so throwing sufficient light up there without it being reflected up into the night sky was extremely tricky. 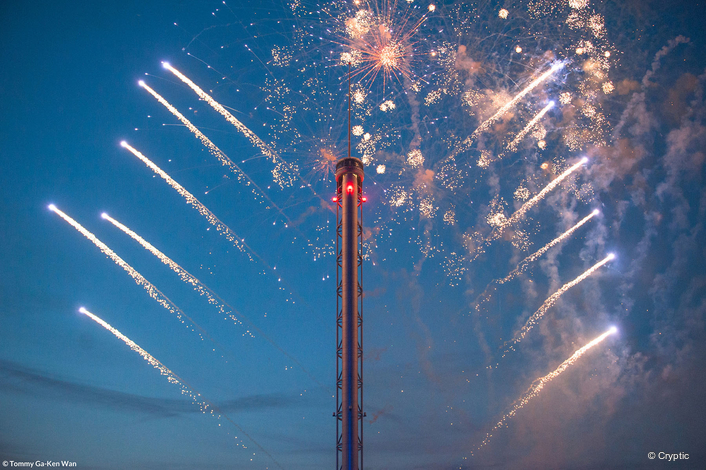 Around the FOH position were another eight P5s shooting into the basin together with another two QWO 800s, four CP Sharpie Washes, four Martin Atomic strobes and two Robert Juliat Victor followspots.

The Glasgow Tower was lit with six Sharpie Beams and four Sharpie Washes.

Page operated all the shore-based lighting from his trusty Jands Vista T2 console.

Six vessels had lighting systems installed on them, to support performers playing on deck. 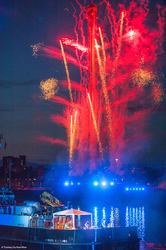 Glasgow electro outfit, Miaoux Miaoux, and Model Aeroplanes from Dundee were special guests aboard auxiliary support vessel ‘SD Omagh,’ and they were lit from behind with Clay Paky A.leda K10 B-Eye wash lights and a grid of Chauvet Nexus 4x4 panels, all operated locally via a Jands S3 console.

The Treacherous Orchestra made waves aboard Royal Navy minesweeper, HMS Bangor, with their set being lit with a variety of kit including six Sharpies rigged on a scaffolding goalpost creating a high impact fan effect, Showtec Sunstrips upstage for eye-candy and Showtec Spectral Zoom LED PARs for general washing, controlled with another Jands Vista S3.

dbn’s intrepid Nick Buckley literally had to ‘jump ship’ via the dockside to be in place in time to operate lighting on both boats!

Further kit was installed on the four other boats that were active in the show – the ‘Orcuan’, a 9 metre long Birlinn fishing vessel; the 33 ft long Baldie ‘White Wing’ popular for fishing on the East Coast of Scotland; the ‘Wee Spark’ a third scale Cylde ‘puffer’ and the ‘Maybe’, an elegant traditional Dutch sailing Ketch launched in 1933 and built for round-the-world cruising.

The on-board lighting kit included a single CP GlowUp battery powered wireless LED up-lighter rigged on  the ‘Orcuan’ to a slightly more sophisticated set up on the ‘White Wing’ comprising 30 metres of LED tape and two GlowUps, controlled locally by an ETC SmartFade 1224.

The ‘Wee Spark’ was fired up with four iPix BB4 LED battens and two GlowUps controlled via wireless link to the FOH console on the shore, and the ‘Maybe’ was graced with 600 metres of Warm White fairy lights in her rigging – which provided a fantastic backdrop to an additional solo aerial dancer. 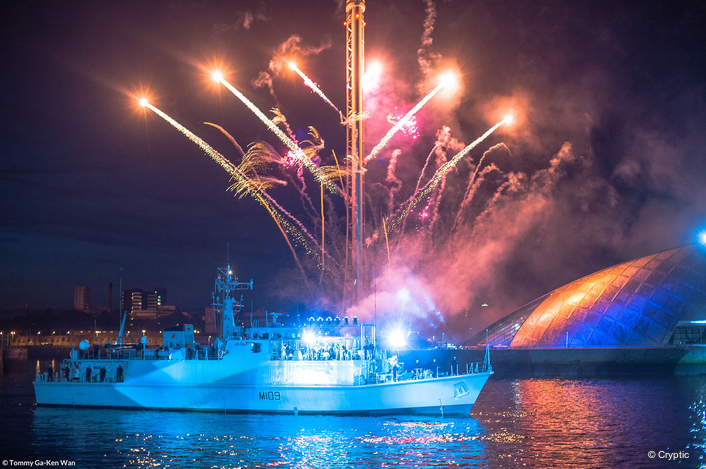 Page recalls that after getting sufficient illumination up to the top of the Science Centre, rigging these fairy lights was definitely the next most challenging lighting detail of the project to get right!

Glasgow beatboxer Bigg Taj freestyled aboard the ‘Wee Spark,’ folk singer Rachel Sermanni sang from the prow of the ‘White Wing,’ and soprano Marie Claire Breen, in full voice, was rowed into the performance space aboard the ‘Orcuan’ accompanied by the Glasgow Phoenix Choir singing from the dock side.

Page and Buckley were joined by three other dbn crew – Moss Everhard, Col Emmerson and Steve Barnet, and they were assisted by rigger Pete Isherwood on the first day, and on the de-rig by Lucas Athienetes.

Page sums up, “It was a really exhilarating project to be involved in, brought to fruition by a lot of hard work and some touches of pure ingenuity to overcome many challenges and idiosyncratic scenarios – which is what we like. There was a great team spirit and vibe between everyone working on site, the shows were both fully attended (by around 4,000 people) and it was a great success”.

dbn Designs and Installs ... Lighting at Albert Hall
Clay Paky and dbn in Mons...ion for Derry Spectacular
dbn are Live at Jodrell Bank