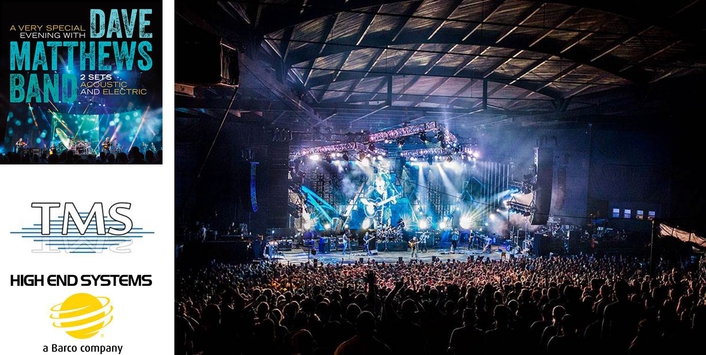 Fenton Williams and Aaron Stinebrink Unleash Latest HES Innovation on US Summer Tour
Billed as ‘A Very Special Evening With The Dave Matthews Band’, the group’s latest US shows are giving fans two distinct sets from DMB with no opening act, a first for the group. The tour is also debuting High End Systems’ revolutionary new SHAPESHIFTER automated luminaire to enthusiastic fans across the US. With production support by TMS, LD Fenton Williams and programmer / co-production designer Aaron Stinebrink are putting SHAPESHIFTER through its paces as the fixture serves as their eye candy ‘workhorse’ during the second set.

Following an acoustic set that showcases classic conventional lighting looks - often during daylight, the band takes a short break then returns for a two-hour electric tour de force, where SHAPESHIFTERs add gorgeous textures and effects to the visuals produced by Williams and Stinebrink. Aaron explains how the new fixture came to be a featured element of the design: “Craig Burross called Mark Huber at TMS, and after the call Mark said he had never heard a salesman so excited about a new product. I immediately phoned Craig with a few questions, and then I flew to Austin to see it first hand before the release.

SHAPESHIFTER is an incredibly interesting and creative product to have in your toolbag. With individual control of each module inside the SHAPESHIFTER, whatever your vision is, you can achieve it with that fixture. We were instantly reminded of how designers would utilize a circular truss, and the sweeps that you see on that type of layout. It was stunning to see this in one fixture, and being able to replicate all those sweeps, along with all the other effects that you can produce, it allows you to build from a standard wash light look at the beginning of the show, to using each of these modules to move in a different direction however you want, or fade in and fade out; it’s a very unique yet versatile fixture to utilize.”

Williams and Stinebrink use a dozen fixtures in the rig, with eight directly upstage of the band at eye level, and two on either side of the stage on cases. Aaron adds, “During programming, we used the SHAPESHIFTERs in their extended mode, so we could explore the full range of what the fixture can do. We had complete control of how it moved, so a lot of our effects and chases were built in the effects engine of the console or through the cueing. At times we did use the internal effects because there were some looks you couldn’t easily recreate to replicate the way High End had programmed it into the fixture. It was a fun balance between the two. High End put a fantastic amount of macros in the fixtures; if I was doing a festival or a one-off, I wouldn’t hesitate to to use the smaller channel count and rely on the macros.” 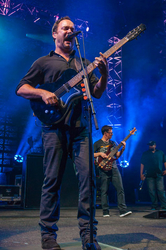 As the visual architect for DMB for over 22 years, LD Fenton Williams continues to deliver gorgeous shows and break new ground as a designer, and was immediately taken by SHAPESHIFTERs unique look and feature set. He comments, “High End sent a SHAPESHIFTER to TMS and I loved it immediately. I’ve always been a fan of what you can do with lighting on a circle, and that was the first vibe that I got from the fixture. The nice twists and sweeps that you can achieve by having several lighting instruments placed around a circular structure are very attractive, and this new fixture gave me that impression right away. It’s what first attracted me, and I’m certainly glad that it did, because on this tour I feel they have become the workhorses out there that I really like and lean on night after night. They provide a really nice environment to frame the band and set them in. I can’t say enough good things about the SHAPESHIFTER. I’m sure there’s a lot more that we’ll do with them, but this is the first time we’ve taken them out, so we’ll learn as we keep moving forward, but I am really enjoying using the SHAPESHIFTERs on this tour. The fixture is amazingly effective when you use it for the dramatic or upbeat moments that really call for it. Used in that manner it is simply breathtaking.”

As always, the production support of Theatrical Media Services (TMS) is critical to the efficiency and success of Williams’ design. He adds, “Year after year, TMS provides unbelievable service and they bend over backwards to accommodate and accomplish the end vision that we put down on paper. Crew chief Pete Franks is awesome, and TMS’ follow through is second to none.” 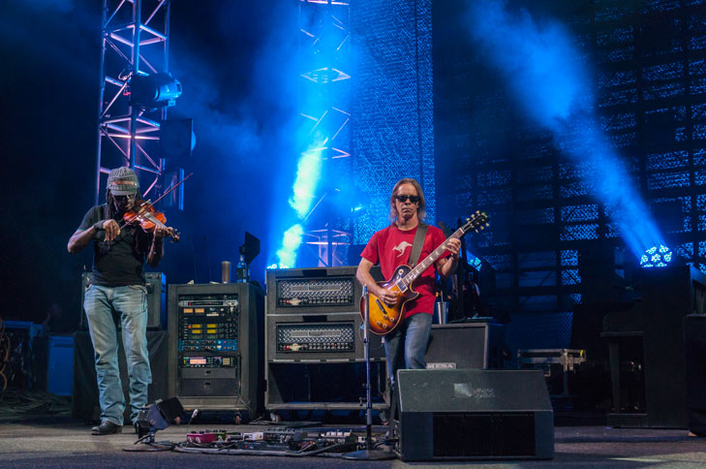