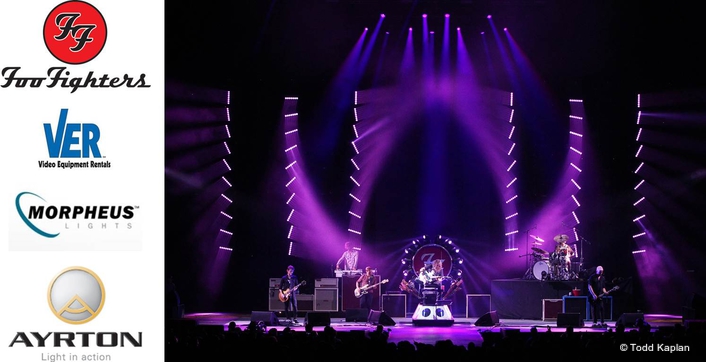 Foo Fighters front man, Dave Grohl, has famously reclaimed the stage for the band’s Sonic Highways tour, mounted on his own ‘Iron Throne’ after breaking his leg in a fall from the stage in Gothenburg in June. The throne is adorned with a corona of 12 Ayrton MagicDot™-R LED moving lights which are used by lighting designer, Dan Hadley, both as feature lighting and for illumination of the charismatic singer.

MagicDot-R is one of Ayrton’s newest fixtures and the first professional LED moving head to feature a single 60W 4.5° RGBW LED source. Its totally round head fits within the diameter of its cylindrical base in all positions, allowing bold new configurations with barely a centimeter of space between two luminaires.

“When Grohl came up with the napkin drawing of the throne I knew, from seeing Ayrton’s demo video, that the MagicDots were exactly what the throne needed because they pack so many options into such a small space. They had all the colour, quickness, and smooth dimming that I knew from the MagicBlades, all of which would be useful in such a tight space prone to scrutiny,” says Hadley. “I used the MagicDots mostly as eye candy, radiating out from the Throne and exuding the energy of Grohl’s performance. But they do have a couple instances where they will bring it all down to lighting him for a quiet moment.”

The Sonic Highways tour started in December 2014 with Hadley’s original specification of 60 Ayrton MagicBlade™-R fixtures in the rig. VER’s Lighting Division provided global service to the tour with two simultaneous rigs in North America and Europe to service the ongoing tour all across the world.

MagicBlade-R is a unique fixture which aligns seven 15W RGBW LED 4.5° sources in a row to produce a smooth curtain of light with some incredible manoeuvres, including a continuous pan and tilt feature. Hadley rigged his MagicBlade-R units upstage on custom frames, built by SGPS, alongside a series of video panels. 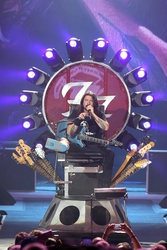 “The MagicBlades are used at first as mostly hidden sources,” he explains. “As the show progresses, the video screen splits apart and the MagicBlades shoot from behind it, lighting the band in profile. Once the screen strips turn around to unveil the MagicBlades we really let them loose to do all the lovely eye-candy stuff they’re so great at.”

Despite the frequent changes in the Foo Fighters’ set list Hadley has created a series of looks which can be adapted easily to keep pace with the changes. “One of my favourite looks is used most often during ‘These Days’,” he says. “I have the MagicBlades doing a slowly curving movement along with a colour fade that allows the individual sheets to blend together into gently sweeping curved shapes.”

Hadley programmed the MagicBlade-R and MagicDot-R units using a GrandMA 2 but chose not to use any of the fixtures’ on-board macros. “I chose the MagicBlades primarily for the unique sheet of light that they provide. It is different from the typical beam that you get from most fixtures. I also chose them for their versatility and unique features such as the infinite pan and tilt, which is also present in the MagicDot.

“I’ve been able to create different architectural looks that aren’t achievable with conventional single-source fixtures. It’s nice to get away from the conical or triangular shape that we are most familiar with. What other LED fixture is going to give you that lovely sheet look AND be able to do all the crazy eye-popping stuff? There are no substitutes for such unique fixtures.”

The MagicBlade-R and MagicDot-R have proved very robust on tour – almost as much as the lead singer himself! “The MagicBlades have been great with very few issues - if any!” says Hadley. “And the MagicDots got completely soaked in a show-stopping storm in Quebec City; since they are hung in a circle, they got nailed from all angles and we didn’t lose a single fixture.”

So, having experienced Ayrton MagicBlade-R and MagicDot-R fixtures for the first time, would Hadley use them again? “Hell, yes!” he says. “They’re great!” 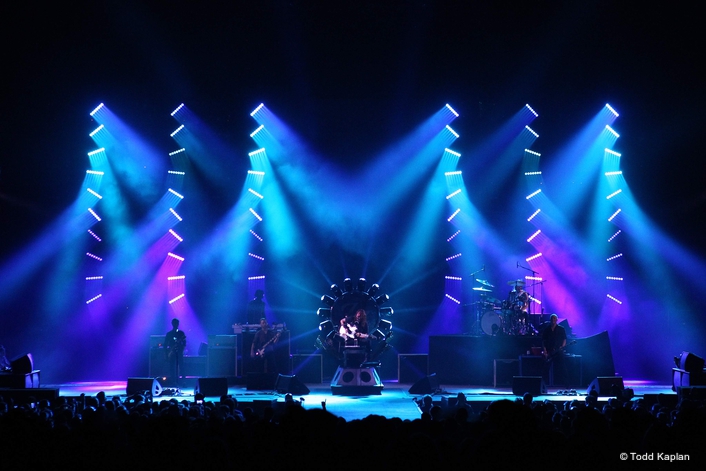 The Foo Fighters Sonic Highways tour, which recommenced with the band’s 20th Anniversary Blowout at RFK Stadium, Washington DC on 4 July 2015, will continue until November. The Throne, with its Ayrton MagicDot-R halo in attendance, will be used as long as Grohl needs it: “…or as long as he can manage to listen to the doctors.” says Hadley.

With 32 locations around the world, VER features a large and growing inventory of the latest Ayrton products.

Ayrton products are handled in the US by exclusive distributor, Morpheus Lights.