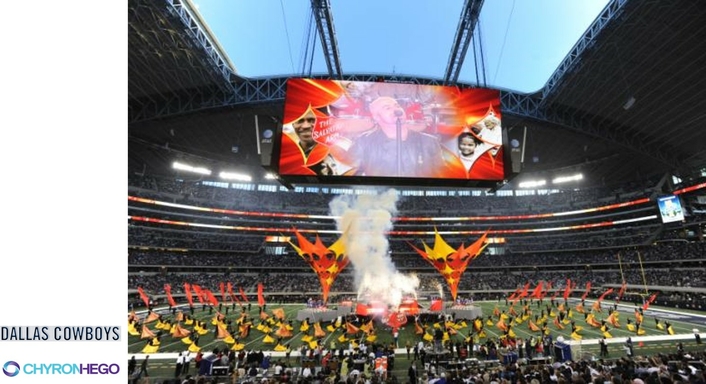 LiveFX Endzone Board at AT&T Stadium

The Dallas Cowboys are nearing completion of a comprehensive upgrade of the ChyronHego-based arena graphics systems at the team’s home field, AT&T Stadium in Arlington, Texas. Headlining the project is Click Effects PRIME, ChyronHego’s integrated graphics toolset for delivering live arena- and stadium-based AV presentations to any canvas size with any number of outputs in any resolution. Click Effects PRIME — together with the latest versions of ChyronHego’s LyricX, Paint, and Virtual 1st — is ushering in a new era of 4K production on the LiveFX Endzone board at AT&T Stadium.

“AT&T Stadium is beginning its 11th season this year, and ChyronHego systems have been our mainstay since day one. Personally, I’ve been using Chyron products for the better part of my 40-year career, which gives me a keen perspective on how well these technologies have improved and evolved,” said Dwin Towell, director of broadcast engineering for the Dallas Cowboys. “Our migration to 4K will eventually require replacement of every screen and system in this stadium, but we’ve never questioned whether ChyronHego was the right graphics provider in this huge undertaking. With Click Effects PRIME as the perfect example, these solutions are mature, dependable, and very well-supported. Also, since ChyronHego is an industry standard for graphics production, it’s easy to find technicians who are well-versed in the systems.” 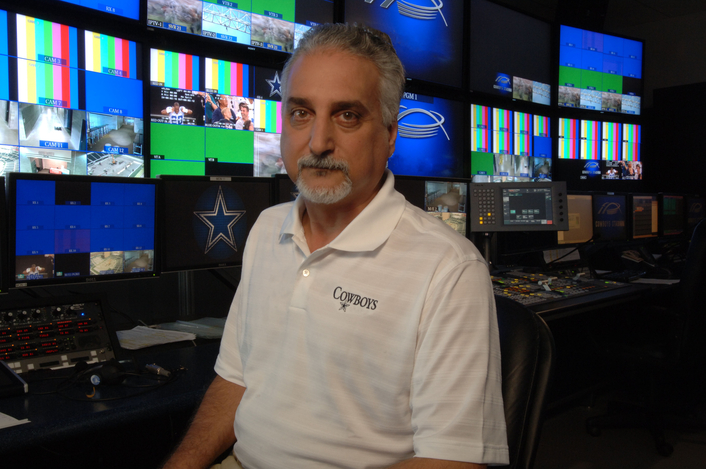 Dwin Towell, director of broadcast engineering for the Dallas Cowboys, in the control room of AT&T Stadium.

The Cowboys’ first LED to display 4K content, and the team’s first Click Effects PRIME installation, is the large LiveFX Endzone board. Used primarily for game support graphics such as replay videos and fan entertainment during breaks, the board went live with 4K video clips and graphics driven by Click Effects PRIME for the 2018 football season.

For the 2019 season, all Dallas Cowboys cameras will record in 4K, and the team will expand Click Effects PRIME to larger numbers of displays. Eventually, Click Effects PRIME will drive 4K graphics to every display in AT&T Stadium, including the huge center-hung LED, two levels of ribbon boards, gap boards over the four entrances, and more than 3,000 smaller screens located throughout the stadium.

The new native GPU-based technologies in Click Effects PRIME give the Cowboys the power to deliver HD and UHD content to multiple screens simultaneously and synchronize multiple outputs in native resolutions. This capability makes possible “Moments of Exclusivity” or MOEs, in which the team is able to trigger multiple displays throughout the stadium network and display a single, exciting graphic on each; e.g. a large “Touchdown!” graphic when the Cowboys score or an eye-catching image of a key player at the instant he reaches a lifetime career record.

In addition to Click Effects PRIME, the Dallas Cowboys are upgrading to the latest versions of the LyricX graphics creation and playout solution, Paint telestration tool, and Virtual 1st “down and distance” football graphics tool. The Cowboys’ deployment of Paint and Virtual 1st is unique, with inputs from two separate cameras delivering north and south views to the center-hung screen to give each fan the best possible viewing angle. Paint and Virtual 1st are able to calibrate both inputs quickly and automatically to show the virtual first down line and enable telestrated explanations of replays from any vantage point on the field.

“4K resolution is the wave of the future for live, arena-based productions. As they have done for so many other key technology innovations, the Dallas Cowboys are blazing a trail for 4K stadium shows,” said Randy Dickerson, national director sports venues and strategic accounts at ChyronHego. “It’s an honor to work with the Cowboys as they make history, once again, and keep pushing the envelope for arena-based sports and entertainment.”