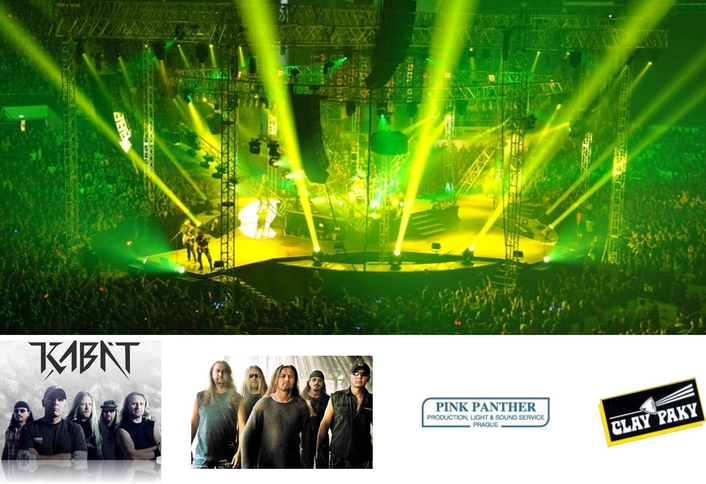 Lighting designer Petr ‘Panki’ Volek from Prague-based production company Pink Panther has been with the band for 12 years
When the Czech hard rock band Kabát toured to promote its latest studio album Banditi di Praga, the band continued their long association with Clay Paky and used the Alpha Beam 1500 and Alpha Spot HPE 1200. The rock show was built around a 360-degree circular stage, which toured the Czech and Slovak republics.

The centrepiece of the stage was a massive industrial chandelier constructed from 192 par cans. Positioned around the edge of the circular stage were 15 Alpha Beam 1500s dispersing massive beams of light like spokes from the hub of a wheel. Also part of the rig were 20 Alpha Spot 1200s, while Shadow 1200 long-throw followspots were used to track the band on stage.

Lighting designer Petr ‘Panki’ Volek from Prague-based production company Pink Panther has been with the band for 12 years and knows their requirements. He explains the reasons why the band uses Clay Paky:

“Experience tells me that Clay Paky’s lights combine maximum output with the best available optics. Quite frankly, the Alpha Beam 1500 is an amazing light. Everyone has been impressed – the band, the crew, and not least, the public.”

The Alpha Beam 1500 generates a solid, super-concentrated parallel beam for long-throw projections. Belonging to the special category of fully automated ACL fixtures, this powerful luminaire offers a variety of tools for shaping and crafting stunning mid-air effects. The Alpha Spot HPE 1200 offers top-grade performance from a complete CMY colour system and features 14 gobos, an animation disc, a prism, two frost filters and an iris. The Shadow 1200 is an intelligent long-throw followspot, and several can be controlled simultaneously from a single control panel or remote control desk.

Kabát is a hard rock band hailing from Teplice in the Czech Republic. Kabát have enjoyed immense popularity in their home country since the 1990s and represented the Czech Republic as the country's first entry in Eurovision Song Contest 2007 in Helsinki, Finland. Kabát has 12 studio and 2 live albums behind them. Banditi di Praga was released in 2010.