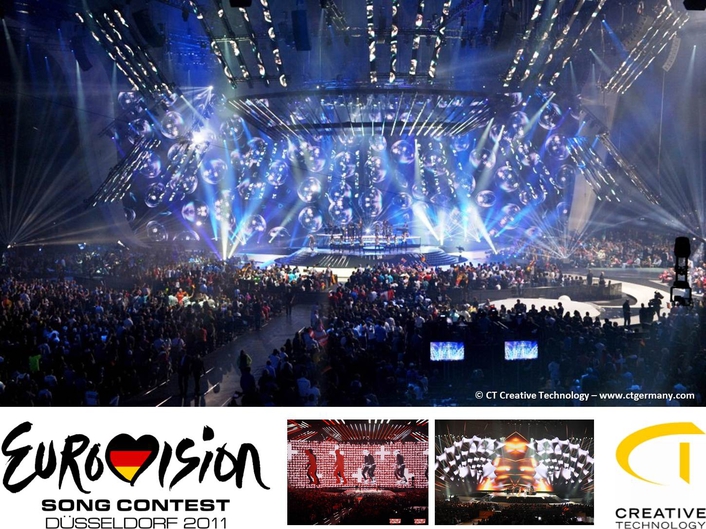 … with an awesome LED installation for Europe’s most spectacular TV music event – live in Germany!
By order of BRAINPOOL TV GmbH, acting on behalf of the NDR, Creative Technology was the chosen media technology partner and realized the largest and state-of-the-art TV set with a stunning LED installation on stage for the Eurovision Song Contest 2011 in the Düsseldorf arena.

An estimated audience of 120 million people worldwide and 36,000 spectators live at the arena in Düsseldorf shared their excitement for Lena’s show act with her song „Taken By A Stranger“ at the finals on May 14, 2011 – and after a exceptional show with the winners Ell and Nikki the Eurovision Song Contest 2012 goes to Azerbaijan.

The unique TV set for the show acts from 43 countries bearded the hallmarks of set designer Florian Wieder and lighting designer Jerry Appelt – the highlights:

• big surprise at the end of the show: the LED screen opened, separated in the middle and revealed the honeycomb designed green room, illuminated in pink with 400 running meter of the Schnick-Schnack LED C-Series System

• in the moving, flying elements above the stage almost 200 square meters of the transparent Barco MiTRIX LED modules with 24 mm resolution were built in

• installed in the stage floor and in the flying elements were 2.6 kilometers MiSTRIP, the creative Barco LED pixel strips

• 12 projections on screens of 60 square meters each, with a total of 720 square meters projected area and with 12 Barco FLM 20 projectors with 20.000 ANSI-Lumen each – broadcasting the show acts to the audience inside the giant arena

• the operators desk was equipped with 7 media servers, 7 backup systems, plus 2 additional media servers for the LED variations on the stage 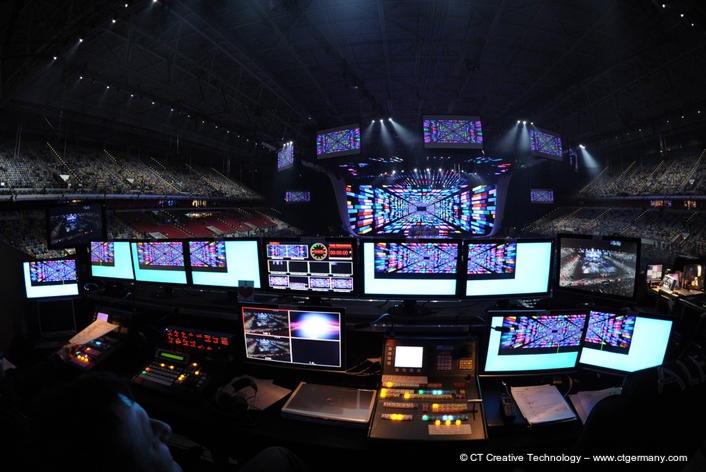 Almost six weeks and with ~60 media technology team members Creative Technology was on site during the set-up, the rehearsals, both semi-final shows, the grand final and for the dismantling at the arena in Düsseldorf. Highly satisfied was CT project manager Alexander Klaus: „The good and in many productions proven cooperation with the other parties and partner companies, among Cape Cross Studio & Filmlichtgesellschaft mbH and Stage Kinetik GmbH, guaranteed the project to run smoothly…“ 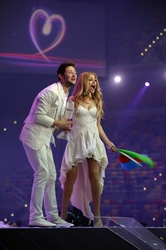 The gigantic LED installation on the stage of this mega event inspired also the media:

„At the highest technical level, with a huge LED screen, opening during the allocation of the points, showing the green room, and emotional also.“ (on: stern.de

„Particular eye-catcher was an over 1,000 square meter LED screen as backdrop of the stage. Designing the stage with colorful animations and visual effects.“ (on: heute.de)

„Cinema at its best was the stage with a … huge LED screen as backdrop.“ (on: tvtoday.de)

„Core piece of the show is the LED screen, showing these large pictures that powerful. (on: sueddeutsche.de)

Together with the CT Europe Team, CT Germany  successfully realized the LED- and video technology for the Eurovision Song Contest 2011 – the biggest live TV-Show in Europa realized on German TV.

Creative Technology is an international full-service provider for rental and installation of professional media technology at exhibitions, conferences, events, shows and on TV and on site for agencies, corporate, stand builders, producers and creative professionals - worldwide.