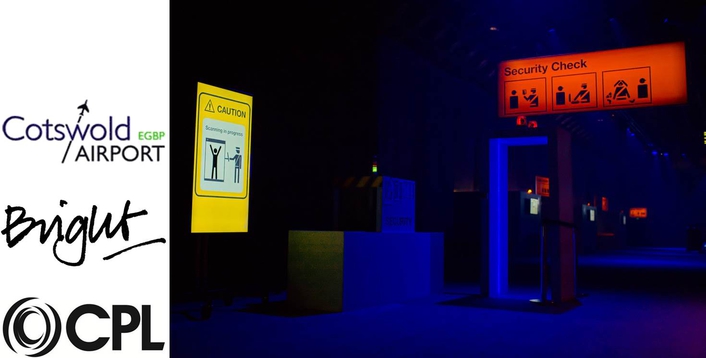 Hangar B2 at Cotswold Airfield in Kemble, Gloucestershire, UK, a vast space built as a World War II RAF station which also served as a base to the Red Arrows aerobatics team until 1983, it’s been largely utilized for storage since then … was transformed into a gleaming modern airport fantasy world for the event.

This took a great amount of imagination, ingenuity, lateral thinking – and just a little bit of magic - as well as a considerable amount of basic infrastructure that needed installing to enable the venue to run as an event space. 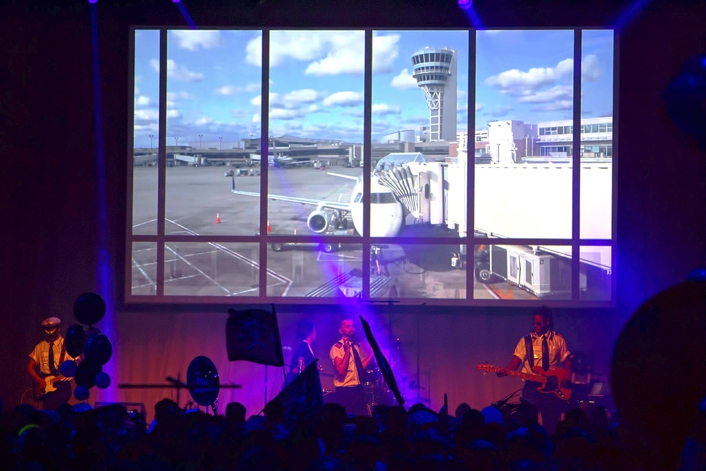 While the building structure is well engineered and has a decent weight loading, to be sure, Bright commissioned a complete report by structural engineers before making any decisions about rigging.

The venue required nearly a kilometre of draping to start with. A mix of black and white trevira was installed on trusses and pipes flown in the roof which delineated the different areas. The main ones were the check in / security and the Departure Lounge.

The main stage in the Departure Lounge hosted a lively DJ and band line up, as well as a set of Awards which were presented by the company CEO for the best dressed attendees … to really get everyone in the mood.

Lighting
For Check In and in the Departure Lounge, lighting was kept clean, white, stark and industrial – just as you would expect in any airport terminal, and as the space started filling up with revellers … everything started to get more colourful and vibrant.

Lighting for both areas was designed by Gruszeckyj and Liam Griffiths, one of CPL’s regular freelancers.

In the Departure Lounge, the lighting was based on a mix of Clay Paky Alpha Spot 1200 HPE, Sharpy and Sharpy Wash moving lights dotted around, plus Martin and Chauvet LED PARs together with ETC Source Fours and a splattering of generic wash and flood lights. These were rigged on a network of trusses flown above the stage and the audience, positioned so the lights could be as flexible as possible in focusing, reaching the stage and all around the room.

Eight Patten 2013s were rigged above the stage as specials, chosen for their unique spacey retro look.

For control, a ChamSys MQ100 console was programmed and operated by Liam Griffiths. 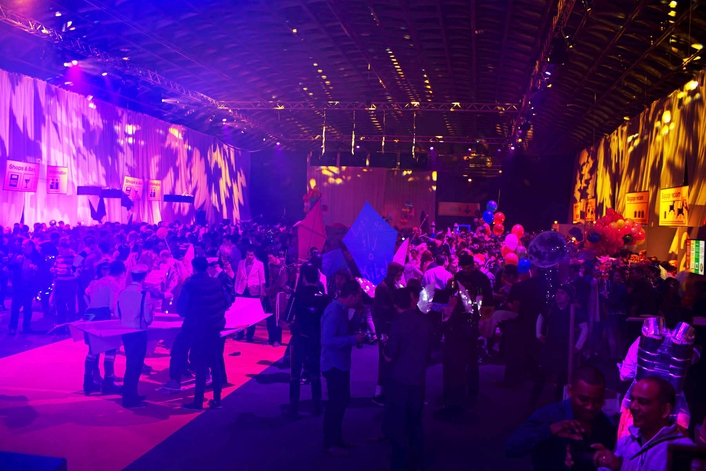 Check In was lit with Martin MAC Auras combined with ETC 750 Watt Source Fours for highlighting the desks and special signage, with further atmospheric lighting provided by Martin LED pars, all run off the same Chamsys desk for the main stage.

Video
CPL installed a 20 foot wide projection screen at the back of the Departure Lounge stage which was fed by a front projecting Panasonic 20K machine, with content sent via a Barco PDS switcher. It showed a mixture of content and graphics running on PlaybackPro, Keynote and as VT  sources on different laptops, all fed onto the projector via the PDS.

At Check-In, a 65 inch LED screen was hooked up to the scanning machine - one of a number of genuine large scale airport props sourced by Bright - and as various bags and persons were scanned, random funny X-Ray pictures would flash up on the screen! 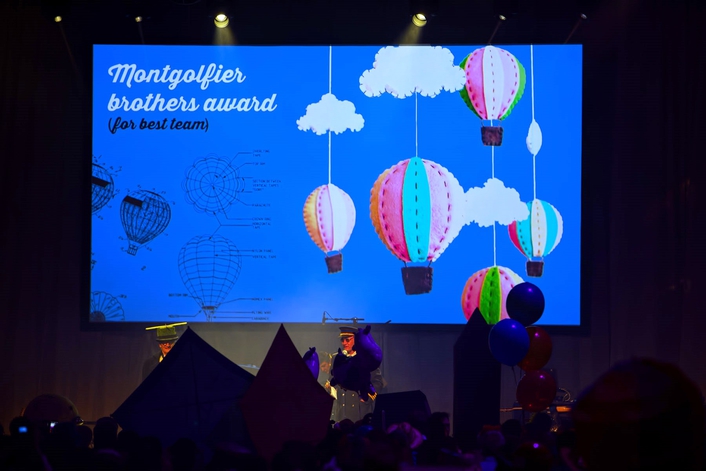 These were stored in a laptop and triggered by a wand carried by one of the air company uniformed actresses on check-in duty.

Sound
A d&b Q-Series system was chosen for its excellent sound quality. 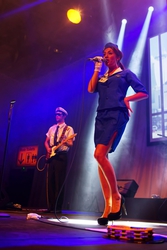 The stage left and right hangs comprised four Q1s with a Q7 at the bottom and a Q SUB at the top of the array, plus two more Q SUBS located under the stage. This was the optimised set up suggested by the Array Calc software, and the configuration worked really well in the big boomy room.

Q-7s were used for front fills, and the monitor wedges were all E12s.

A Yamaha CL5 console at FOH facilitated both the main and the monitor mix, engineered by Tim Sherlock-Brown.

Two Q7s were located at Check-In for playing back atmospheric airport ‘muzak’ soundtracks and a selection of announcements.

All speakers were driven by d&b’s D12 amps

Power
An integral part of CPL’s technical brief was co-ordinating the power requirements for the entire site including those needed by catering and for heating, toilets and public area lighting.

A125 amp three phase supply had to be installed to run the main technical production departments being provided by CPL, and a 60 KVA generator was specified to take care of all the other services. 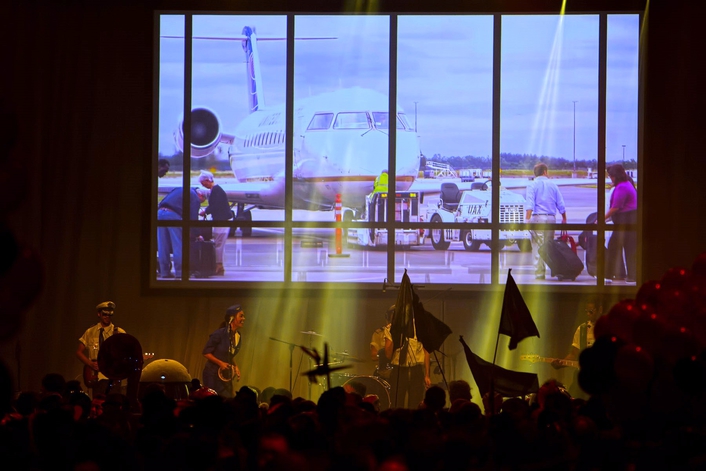 The main challenge, explained Gruszeckyj, was working in a space that had never been used for an event before and ensuring that everything was thought-through and advance planned where possible in a practical and appropriate way. With a tight get-in schedule there were no margins for error.

"It's always exciting to work in a new and site-specific space, and it galvanised the whole team  to be inventive and ambitious in producing an event experience that was highly memorable for guests and of which  we were all really proud “.