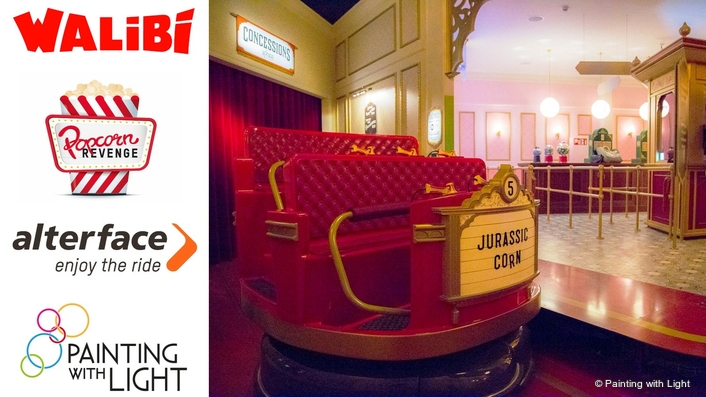 PWL designed, purchased, installed and delivered the complete lighting package for this ride, in the process illustrating the diverse skill sets and experiences offered by its experts working on both entertainment and architectural lighting projects. 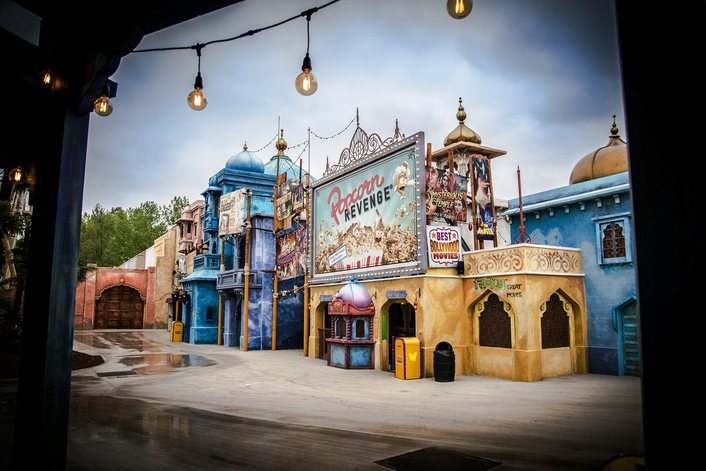 This brought a dynamic ‘crossover’ theatrical-environmental approach to lighting the different ride areas and adding to the atmosphere, fun and animated buzz.

The core action in each of the ride theatre spaces involves a range of popcorn characters - Popcorn Revenge is an IP entity created by Alterface that can be tailored to suit the theme of the park - who come to life on screen having ‘invaded’ the environment – and guests battle to contain them!

Luc was the principal LD and creative director for lighting the project. He completed the initial design based on discussions with Alterface’s ride designers Benjamin Walravens and Laurence Beckers and their project manager François Danhaive. 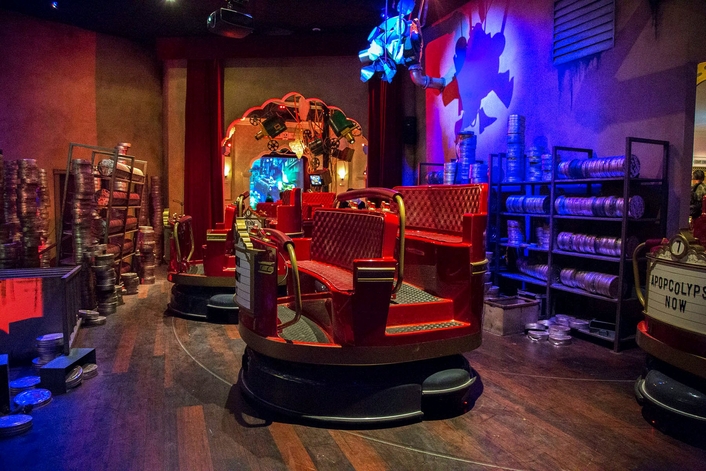 He needed to drill down into the whole perceived experience and sensory journey in a minutia of detail before he and Iiris could event start specifying lighting fixtures. “We really had to get our heads inside the psychology of the Popcorn Revenge game” he explained.

Eleven areas in total needed imaginative lighting, including the individual theatre spaces through which the ride cars pass plus the queuing area and car loading station where up 6 people are allocated to each wagon.

The main general requirement was that the lighting enhanced and supported the highly detailed video action appearing on the screen in each space, plus additional elaborate scenic elements. It had to help ramp up the drama and atmosphere of the gameplay and blend seamlessly with other visual elements to give everyone that ‘ultimate dark ride experience’. 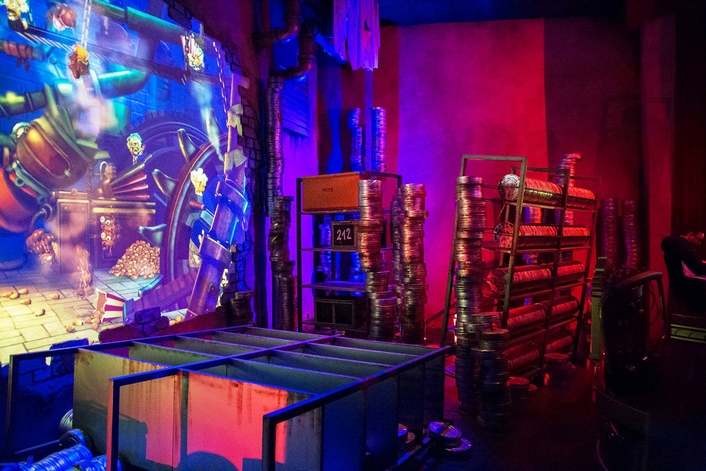 Luc and the team chose a mix of architectural and show lighting fixtures for their work which were combined across all the different areas. Most of the architectural units highlight the many highly detailed decor aspects of the ride. In the theatres, effects lights are instrumental in building a sense of anticipation throughout the all-action ride.

“Every area needed a unique combination of fixtures. With the architectural and décor lighting also an essential element of the ‘show’, a fine balance of the two treatments was required” said Luc.

Finding this synergy was one of the main overall challenges, and an area in which PWL excels in adding luminescent magic!

Maintaining flexibility in the lighting design was another major task. All the movies playing in the theatres might be changed or modified in the future, so lighting had to be thought through not just for what is there now, but potential updates or reworks yet to come. 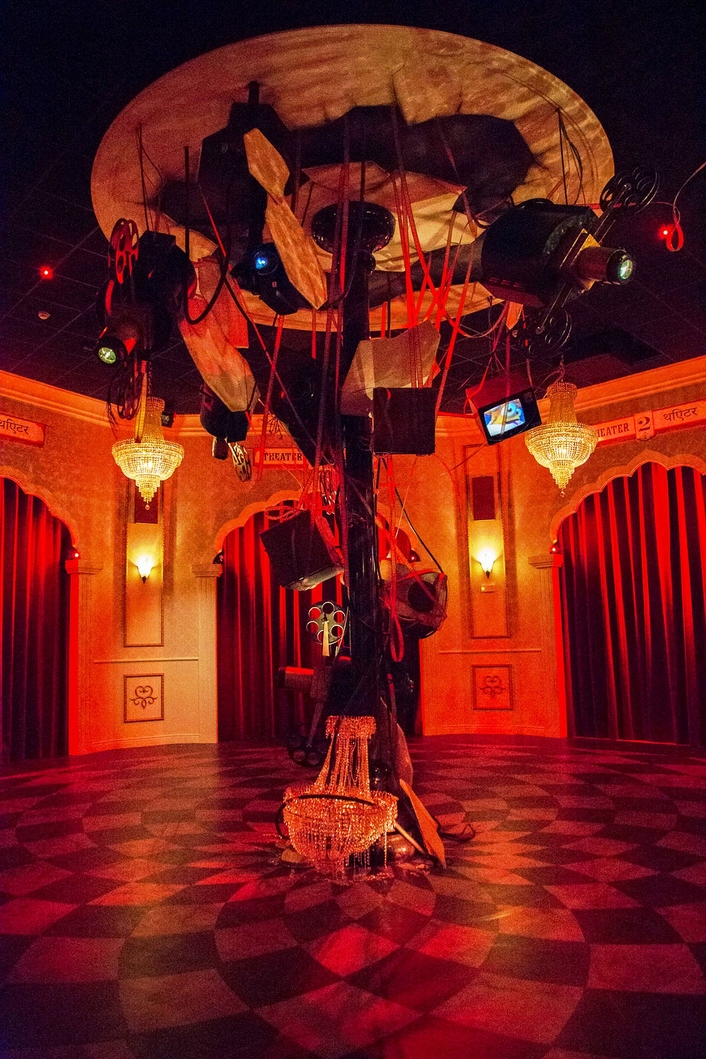 The complexity of detail required was probably the most exacting challenge. After receiving the technical drawings of the scenery and descriptions of the visual material in each space, this was translated into a technical lighting design, including illustrations of how the lights would be used and explanations of practical aspects like cabling / maintenance.

Everything had to be health and safety risk assessed and approved in advance, and this technical design section of the project alone was a massive undertaking. However, as is often the case, good preparation paid off when the team arrived on site to oversee the installation!

Over 100 Gantom LED fixtures light the primary architectural areas, chosen for their tiny size and because they are so easy to conceal. PWL has also used these versatile little lights successfully on a range of other projects.

Gantom One Pinspots are used in all the theatre spaces, ‘crowning’ the tops of the stages, and six Gantom Precision Z Floods are deployed lighting the popcorn machine outlets in the queuing areas.

The effects / show lighting units include products from Robe-Anolis, Chauvet and Prolights.

The intro area is essential for setting the vibe for the whole ride. It’s where the underlying story is told to the ‘players’ / guests before they are sent through the dispatch area, then into the various theatres.

The dispatch area itself features 4 different moods – black light / UV denotes the ‘darkness’ and suspense; ‘angry’ is evoked with blue chasing lights; ‘happy’ sees the space lit with bright and positive colours and then there is ‘melodrama’ when the lighting descends into a gawdy, chaotic atmosphere with flashing and clashing colours .. all of which are created with the help of the Robe-Anolis Divine 60 UVs and other lights. 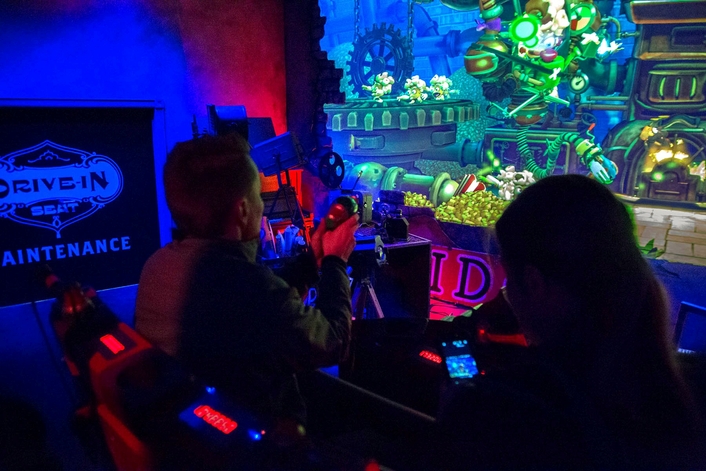 The Divines were picked as they produce the best UV effects (on a high 365nm wavelength) as well as additional looks, and they are positioned in the central space with a centrepiece comprising multiple TV sets, fake projectors and film rolls.

The fixture size was important here as they had to fit inside the projectors, with the outer ring of the light left outside posing as part of the projector. Extensive use is made of the COLORado’s zoom and strobe.

A single COLORado Solo 1 grazes up the Popcorn sculpture in the final theatre space, lighting a sculpture created by a fake projector, throwing a Popcorn like shadow onto the backwall.

The zoom functionality was crucial here as well, as the shadow must be at a specific size, proportion and position. Other challenges were limitations in the mounting position due to extensive shadow-casting kit elements in the ceiling.

The third Chauvet fixture is the Ovation Min-E-10WW LED ellipsoidal, seven of which highlight the signage from the queue zone looking towards the ride, chosen for their zoom and accurate framing shutters, which were needed to precisely pick out the signage.

A Laserworld PRO-800 RGB colour laser is installed in the theatre where the Popcorn characters are in space, to create a more textured and three-dimensional vortex in the room resembling a large sky twinkling with constellations.

Seven Prolights GALLERYECLIPSE FCs, a compact RGBW LED ellipsoidal with a 19° to 36° zoom and full shutter module - designed for gallery, product and shop window lighting - are utilised in the central space to highlight the names of the different theatres above the entrances. These are run via WDMX wireless control. 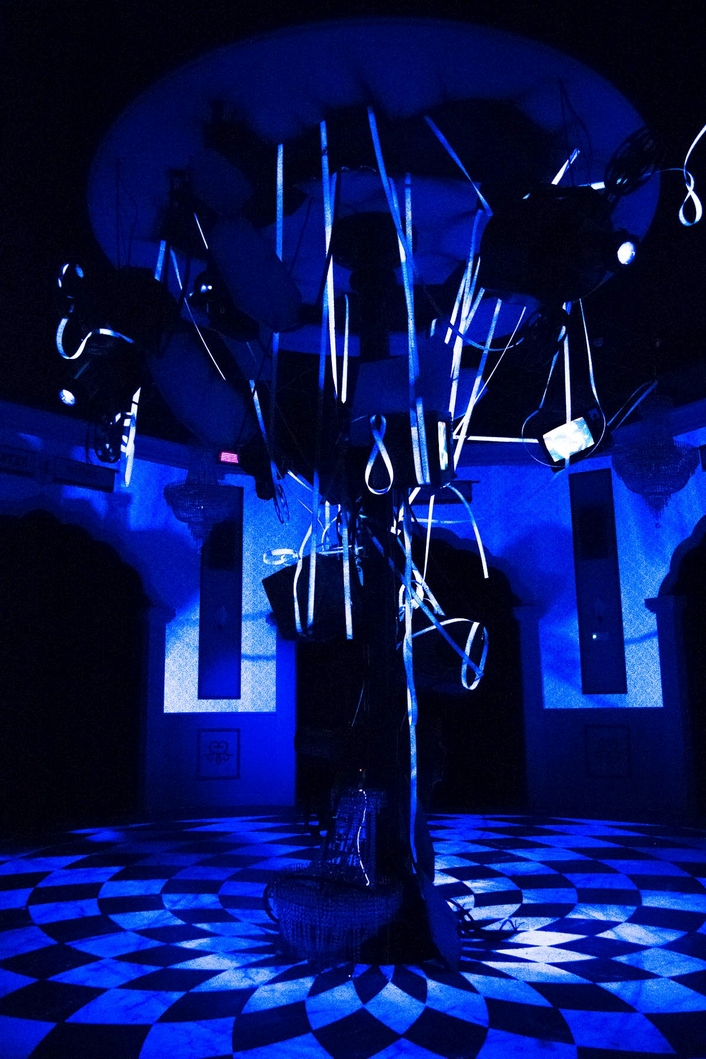 All the lighting cues were created and programmed by PWL’s team during some intensive sessions at their studio in Genk, Belgium, onto an MA system, and a grandMA onPC in the ride control area is triggered by the overall Salto show and ride controller.

PWL commissioned Dieter Venderickx to oversee the installation part of the project.

Luc commented: “We have again enjoyed some great teamwork, creativity and fusion of ideas and skills working with Alterface, and I think everyone has collectively produced a world-class attraction that will be a big success and a whole lot of fun!”

Alterface CEO Benoit Cornet concluded saying: “The importance of lighting a dark ride is often underestimated, yet it's a crucial element to enhance the visitor experience. It's been a pleasure for Alterface to work with Painting with Light and infuse our interactive attractions with their valuable expertise." 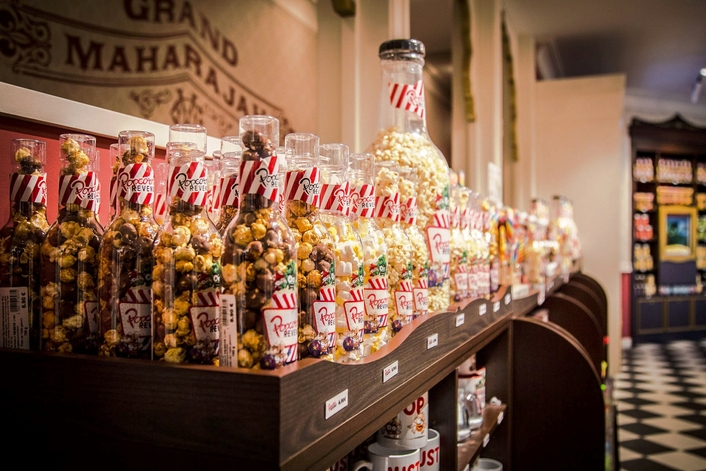