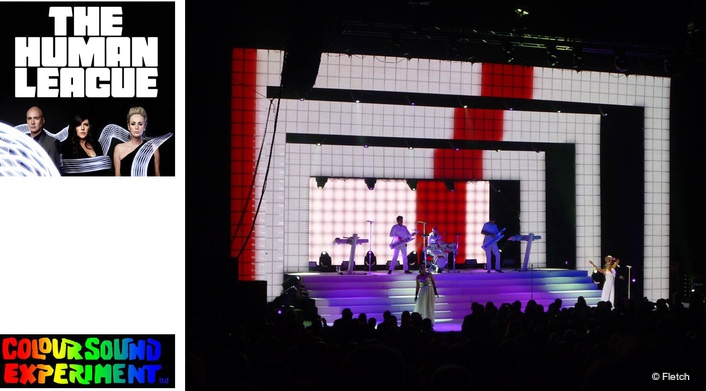 .
Colour Sound Experiment ended a very busy 2014 supplying lighting and LED screens for several music tours including for ultimate UK synthpop aficionados, The Human League. The west London based rental company worked closely with Lighting Designer Rob Sinclair and the band’s Manager, Simon Watson, both of whom were involved in creating the eye-catching set and look for the stage.

The band tour the UK and Europe every two years in the lead up to Christmas to the delight of their enthusiastic and loyal fanbase which includes original fans from their early days in 1980s plus a whole new generation. Each tour presents a different stylish look for the stage and Rob, who has now been lighting The Human League for 10 years, reckons that the biggest challenge is to top what they have done previously.

On recent tours, video has been central to the show and this was again the case, complete with their white carpeted stage and set, which has become a Human League trademark.

The band were playing several larger shows this time, so the idea was to ensure that the set could fill these spaces nicely, and make the statement that it was designed for big venues.

The stage architecture was defined by three video arches in shrinking perspective made up from Colour Sound’s proprietary BT12 LED screen product, complete with an upstage surface of BT6 at the back … 85 square metres in total.

This was concealed behind a mid-stage kabuki which dropped in to reveal all the LED screens about a third of the way through the set – getting a great reaction every night!

The video content was commissioned – and much of it originated - by Rob and produced by Jack James at Reality Creative. On the road, video was operated by James Adkins using a Resolume server, chosen to bring a more organic live VJ feel to the visuals.

“It was a really clean and appropriate look,” says Rob.

Lighting Director on the road was Chris Steel – who has worked in the same role on previous Human League tours - and operated using one of Colour Sound’s ChamSys MQ200 consoles.

Says Rob, “It’s always a joy to work with the Human League and Simon and also with H (Haydn Cruickshank) at Colour Sound, and great to have a long term client who still always pushes me to deliver something fresh … and is prepared to invest in my crazy ideas!”

Colour Sound has supplied Human League tours before but not the previous one to this. Haydn comments, “It was great to be back with The Human League. They always do something inventive, and it was good to see three trucks on the road, the show doing great business and being extremely well received, which I think underlines the effort that everyone involved puts into the production”.