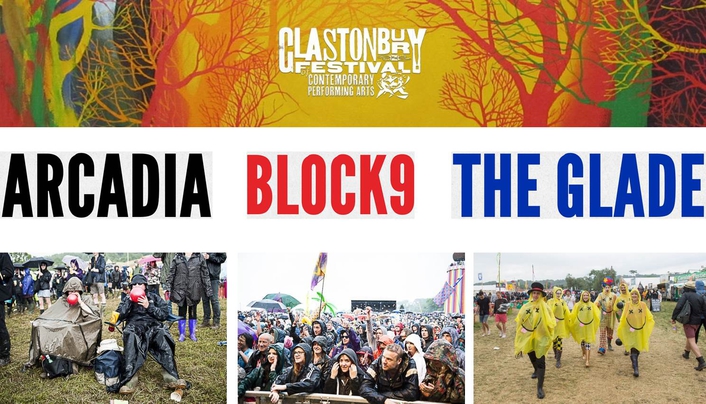 They also kitted out nine major bars around the site with practical and effects lighting.

A Colour Sound crew of 25 and several hundred lighting fixtures hit the tors of Somerset and imbibed the vibes and the beautiful rolling countryside of Worthy Farm for the 5 day event, which again sold out to its 135,000 capacity despite erratic weather and heavy rain through much of the weekend.

Colour Sound’s Haydn Cruickshank comments, “I am extremely proud that we are involved in all the most alternative and coolest elements of the site. A serious amount of effort goes in to the detail from everyone involved, and the results speak for themselves in terms of visuality, scope for fun and enjoyment and providing some excellent entertainment!”

Block 9
Colour Sound has worked on many other Block 9 projects over the years and the radical set design duo returned to Glasto 2014 with a 24-hour showcase of extremely unconventional and edgy performances taking place on the Genosys stage and two other major visual experiences - London Underground – a mean looking tower block with a tube train trashing out of it – and the lowbeat vibes of NYC Downlow.

All of these received amazing lighting and visuals treatment from Alan King of Rockin’ Horse, who was also the main lighting operator in Genosys. 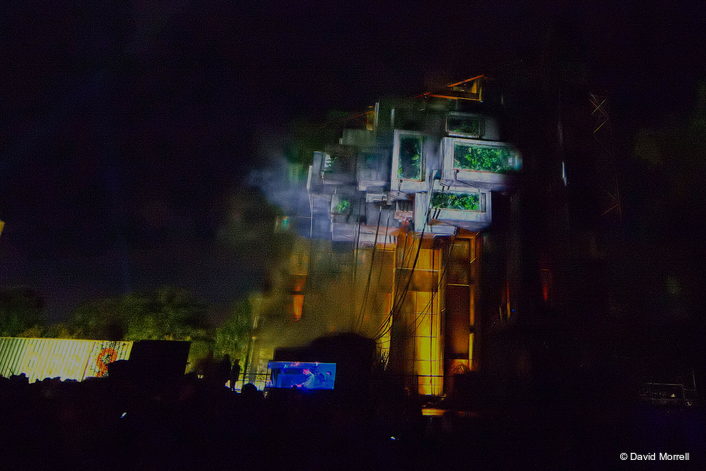 A wide variety of fixtures were supplied including Robe LEDWash 600s and 1200s and Cyclones (high powered fans with LED ring), together with Chauvet Colour Band Pix IPs lighting the main Genosys pods, plus a shed load of strobes and Moles – without which no Block 9 creation would be complete!

Likewise for every imaginable smoke and haze generating device on the planet which were supplied by Colour Sound to try and control the virtual and immediately local meteorology – there were 20 machines in Genosys alone! 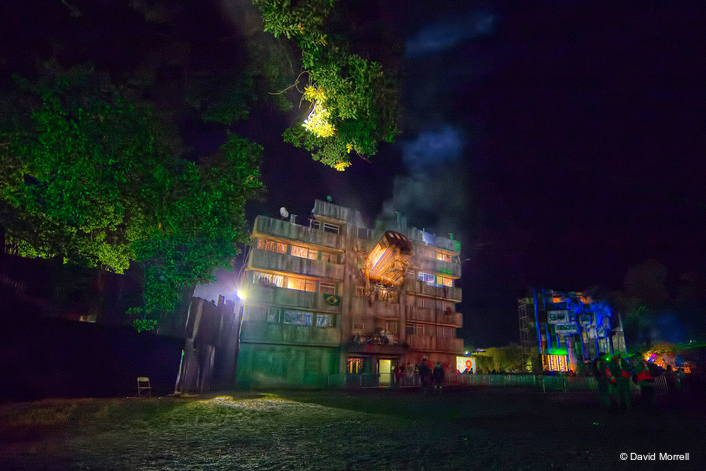 Alan King ran the lighting using his own ChamSys MagicQ console and comments, “As always it was great working with H and the Colour Sound team to create one of the best looking and liveliest areas on the site”.

The lighting of Block 9 included its three main performance spaces, many architectural features and building exteriors as well as an alien invasion / abduction area for fantasy adventure seekers and a whole Hippy Festival area, complete with appropriate props and scenery. 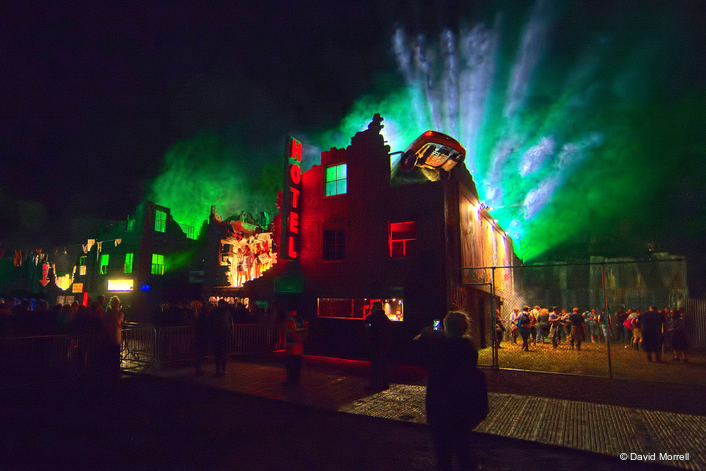 However perhaps the most talked about precinct of Block 9 for all those working at Glasto was the infamous Maceo’s Crew Bar, which opened a week before the site went public and was the hub of the Glasto working community. Accessible to anyone with a crew pass it has fast acquired semi-legendary status as the coolest after-hours meeting place on site.

Arcadia
Colour Sound has also worked with Arcadia for some time, including last year when the giant spider landed at Pilton for the first time. This year’s lighting design was an evolution of the 2013 creation with upgraded kit, and also had a new Production Manager - Tim Smith from Smash Productions. 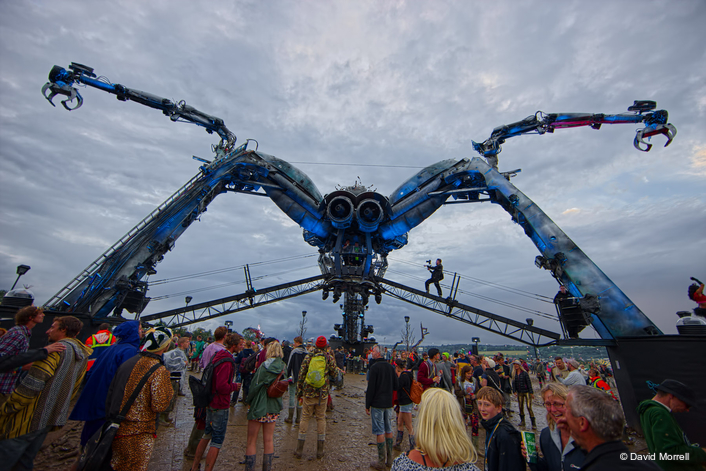 Colour Sound deployed a load of their new Robe Pointe multi-purpose moving lights and 100 DragonLED 220 external PARs for lighting the impressive structure made from scrap metal and ex-military hardware. The DragonLEDs feature 6-colour LEDs – RGBWA and UV - and looked fantastic as the huge metal beast gave main stage headliners Metallica a run for their money in terms of hardware credentials! 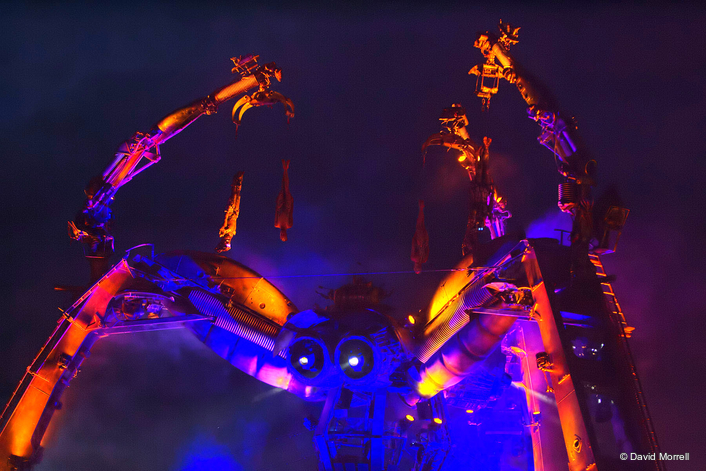 Colour Sound’s Crew Chief for the area was Stu Barr.

The Glade
One of the most laid back and attractive areas on site – despite the gloopy mud - with more superlative music and vibes is Glade, ensconced in the trees in its own little world. Glade lighting was again designed by Colour Sound’s own Jasper Johns, who operated, together with Sam Akinwale.

They used a combination of Robe Pointes, Clay Paky Sharpies and GLP Spot One LED washes together with generics and strobes. Along with Colour Sound’s BT6 high resolution LED screen at the back of the stage for visuals and four 3 Watt RGB lasers, there was a host of other architectural lights and some huge glitter balls!

Control was an Avo Pearl Expert

Getting Barred
While the performance areas always attract plenty of attention, with a full Festival population in the immediate vicinity, the Bars are constantly busy and important areas to light well – both in terms of enabling people to find them and enhancing the general environment.

Colour Sound has illuminated bars at Glasto since 2007 and each year the brief from their client Event Bars & Catering gets more sophisticated. This fundamental aspect of Glasto 2014 is Project Managed for Colour Sound by Fletch – who knows a thing or two about creating a good bar!

They supplied a selection of funky lighting to each of the nine bars in which they were involved plus practicals allowing everyone working to do so safely and with the required light levels.

One of the larger ones was the flagship Liquid Bar, a large inflatable white structure in the middle of the Dance Field.

Fletch designed the lighting which inside featured 20 moving lights including GLP Spot Ones and Chauvet QWash 260s, all patched into a ChamSys console which ran pre-programmed chases.  Waterwave FX lights were used to project liquid effects all around the space and ChromaStrips, installed around the bar fronts, enabled this to also change colour.

Outside, a myriad more DragonLED exterior PARs grazed up the tent which glowed with colour and presence like a beacon after dark – all helping to attract people to it.

More moving lights were dotted around between the other bars along with disco lights, festoons, profiles and PARs.

The first bar opened for business on the Saturday before the festival kicked off and the last one on the Thursday before the Friday as the event ramped up to speed for the three weekend days of full operation.

A Colour Sound crew of four worked in shifts to ensure the Bars’ lighting stayed checked and tech’ed – as they were open from 10 a.m. until around 6 a.m. each day, so both kit and crew were worked hard!