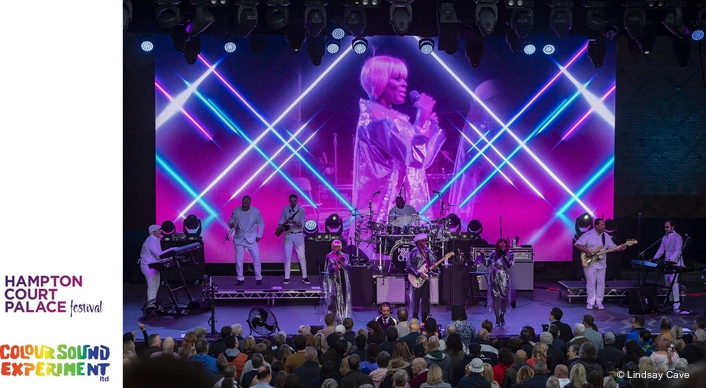 A star-studded line-up for the 2019 season included Kylie Minogue, Nile Rodgers & Chic, Tears for Fears, The Jacksons, Jools Holland and many more.

The event was enjoyed by thousands who flocked to this unique venue to enjoy summer evenings picketing in the gardens and grounds before taking their seats for the evening concerts which ran over a three-week period in June.

Ensuring that everything ran like clockwork onstage was Jonny Gaskell, production manager and production lighting designer, who’s worked for the Festival for the last seven years. Jonny provides a production design for the stage and lights selected architectural features around the surrounding courtyards and gardens. 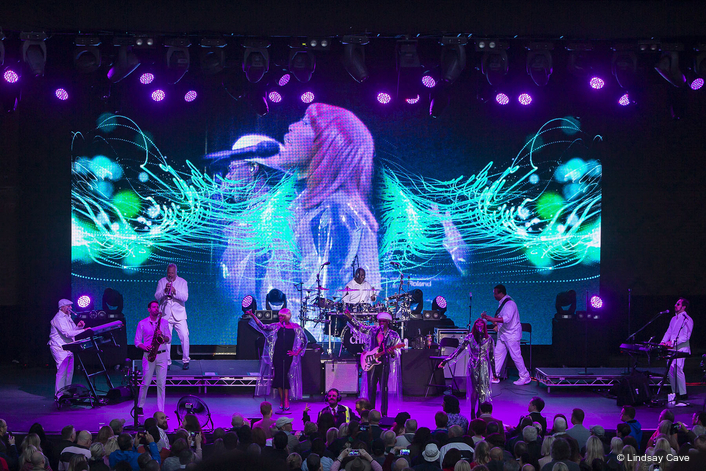 As the artist line up became higher profile and more ambitious each year, Jonny asked Colour Sound – whom he uses regularly for his touring work – onboard to assist with upping the ante on the visual production front.

“They are absolutely solid, great kit and attitude, excellent value, always smiling and offering solutions and never problems,” he says. As a busy PM, these are exactly all these attributes he needs from a supplier.

In addition to the house rig, Colour Sound provides the artist specials packages as required – if they don’t happen to be touring their own. 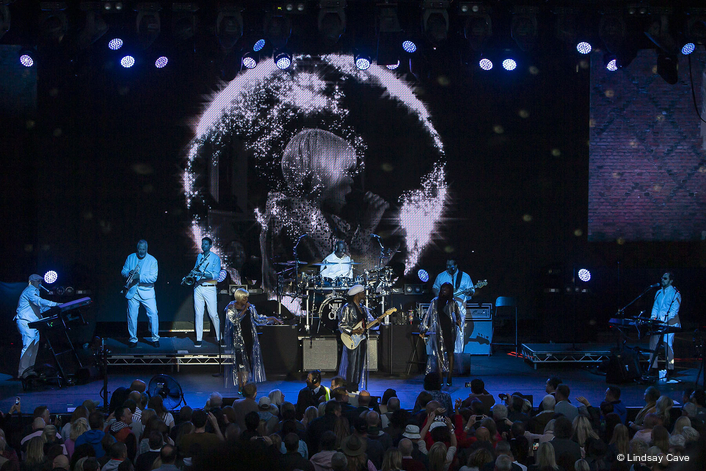 The music ranges from Jools Holland for a regular blast of jazz to full orchestral to pop, rock and funk and soul, catering for a wide range of tastes, and the lighting design takes this as a starting point.

The stage is a custom construction fitted neatly and sympathetically to the Courtyard walls, providing all the accoutrements of a modern festival stage, complete with seating tribunes in front.
The stage is around 60ft wide by 30ft deep with a good 8 / 9 metres of headroom which is great for putting in an arena sized production.

Jonny’s production design for 2019 was based on three lighting trusses – front, mid, and rear – sub-flown from the roof structure, and these provide the house ‘top’ rig which was available for all to use. Colour Sound also supplied a floor package that was available for anyone wanting some extras and not bringing their own. 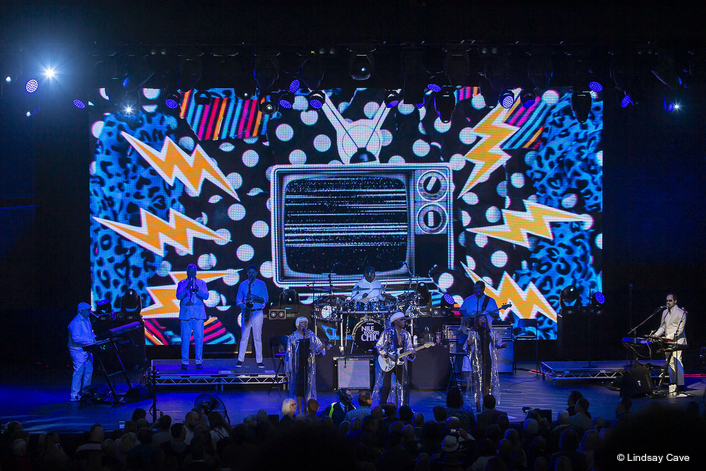 Jonny chose Robe MMX Spots as the main moving lights for this project, picked for their compact size and light weight as the ideal fixture for this setup. Fourteen on these graced the front truss together with six Robe LEDWash 1200s which were used for general stage washes. To highlight the audience, there were four 2-lite blinders on the front rail of the truss.

The mid truss was rigged with six MMX Spots and six LEDWash 1200s, and the back truss had 10 x LEDWash 600s and six MMX Spots.
Available for the floor were six - each - of MMX Spots, LEDWash600s and 2-lite Moles on tank traps.

Onstage, 12 outdoor LED PARs were utilised for skimming up the wall at the back of the stage, which is the back wall of an adjacent courtyard so also made from the distinctive pink bricks favoured by Cardinal Wolsey who oversaw its construction between 1514 and 1521.
This enabled artists not bringing in a backdrop or a video screen to have additional ambience to their stage look - if desired - rather than leaving it as a black hole upstage! 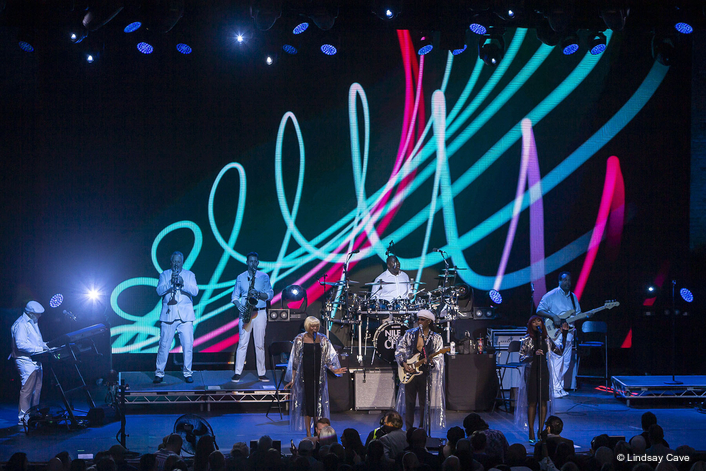 Lighting the back wall also supported the other architectural illuminations which included the walls of the two sub-courtyards leading up to the main Clock Courtyard.

Around 50 outdoor PARs and various sodium floods were deployed to highlight the grounds, including turrets, chimneys, crests and gargoyles, strategic plants and pathways. The main Clock Courtyard was lit with PAR 56s with 134 Golden Amber gels which really made the brickwork pop! The Tudor Crest and draping on the walls above the stage was picked out with some Source Four Zooms.

“The idea is to make it atmospheric and attractive as the dusk falls and then becomes darkness,” Jonny explained … all adding to what’s already an exceptionally charismatic location. He finds that a little lighting kit goes a long way in this context, and site / feature lighting has now become an essential part of the Hampton Court Festival guest experience. 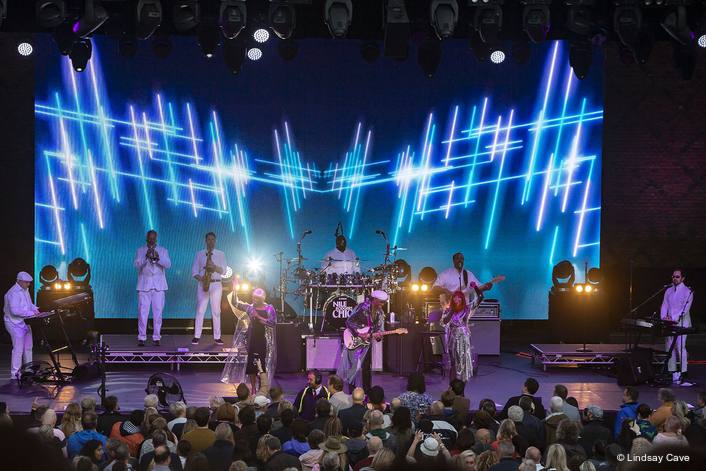 In addition to creating a dramatic feel, the environmental lighting acts as house lighting in the Tudor Courtyard and safety lighting between there and the car park for which guests have to traverse the Base Courtyard and the West Front entrance to get back to their vehicles at the end of the evening.

For lighting control, Colour Sound supplied a ChamSys MQ500 and a Wing for the stage and an MQ80 for the architecturals. Jonny lit all five headline artists who didn’t bring their own lighting designer or operator utilising the full house rig and floor package, which give him a nice cross-section of bands to light.
Colour Sound supplied a full LED screen for The Jacksons.

Challenges include being mindful of the power! The lighting – both stage and environmental – plus any video elements run off one 200A 3-phase supply, with a separate 63A single phase for audio. Even with the proliferation of LED lighting now available, it’s still tight!

Also, the courtyard is open to the public during the two-day build period, so the production build must be scheduled with that in mind.

IMG is the promoter and Jonny really enjoys working with their team and all the other crew in these incredible surroundings and a very chilled atmosphere. “People are always very calm when they play Hampton Court, there’s no rock ‘n’ roll tantrums, just lots of cool people, a very nice vibe and we all ensure the public get to enjoy excellent music in a fantastic setting.”

Colour Sound’s H (Haydn Cruickshank) says, “It’s great to be involved in this event – it’s very much a Festival on the up and with many unique elements. The line-up expands constantly along with the commitment to higher production values and keeping the expectation buzzing each year.”