Colour Sound Finds Common Ground with Above & Beyond 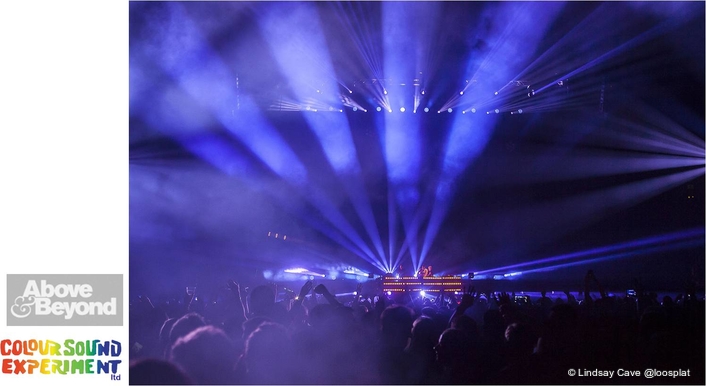 Lighting and visuals rental specialist Colour Sound Experiment delivered lighting and video equipment for Neil Marsh’s stunning show design for popular alt.trance aficionados Above & Beyond at London’s O2 Arena. The high profile one-off was effectively a ‘soft’ album launch for their new “Common Ground” work and comes ahead of an extensive 2018 tour which will kick off in the U.S.

Neil took the base elements of the design for this show from their recent AGBT250 show at the Gorge Amphitheatre, near Seattle in Washington State.  The band host a weekly two hour radio show - Group Therapy Radio – and celebrate every 50 radio shows with a large ‘ABGT’ live event staged in a different county each time. 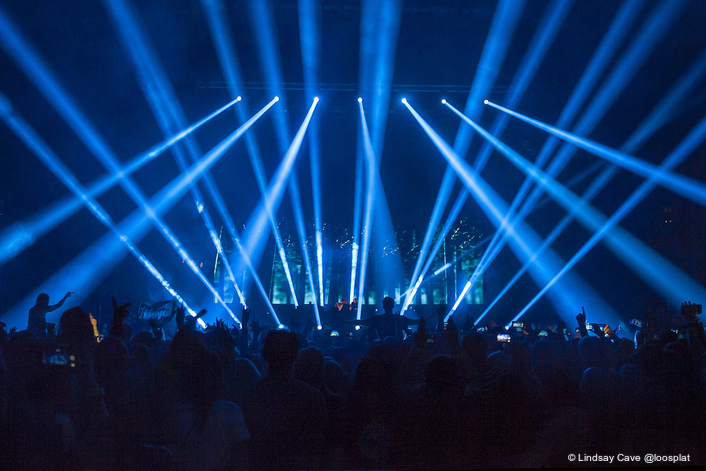 As a one off, Neil’s philosophy was to take a lighting and video design concept that he knew worked very successfully and keep things straightforward given the timescale and high expectations of all involved for this London show!

He actually had to downscale the rig slightly to fit it into the O2! As with all Above & Beyond live shows, he collaborated closely with the band’s Paavo Siljamäki on developing the stage presentation as well as with video designer and content producer Dylan Byrne from Bog Standard.

A single 15 metre wide by 6 metre high wide screen made-up from Colour Sound’s BT-7 LED product formed the backdrop, and this ran in conjunction with two side screens of the same LED, each measuring 8 metres by 3 metres high, also in landscape format. At times all three had one large single image playing out across all three surfaces and other times they showed individual content. 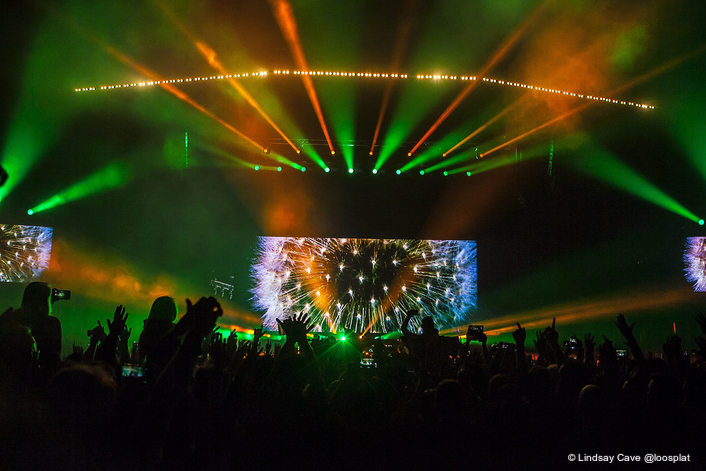 The trussing structure featured three cross stage trusses, two running down each side of stage, with three separate ‘blinder’ trusses, which were slightly angled, each rigged with 24 x 2-lites and flown high up in the O2.
Audience interaction is right at the heart of Above & Beyond’s live shows, so getting the lighting reaching out into the crowds and enveloping them up in the energy of the performance is an aspect on which everyone works hard.

The 2-lite Mole count was bumped up to 96 with a string of another 24 fixtures running upstage across the deck.
For key lighting he added two small trusses, one flown slightly stage right and upstage of the band, rigged with three Robe Spiider LED wash beams which provided some nice back-lighting effects. Another small truss was in the corresponding stage left / downstage position, also with three Spiiders providing front key light.

Neil explains that while he likes the look of the back / front contrasting wash lights on the band, it’s also important to light them so they are not blinded and can still see and connect with the audience … so the angled trusses are a great solution that also look excellent on camera.
In Seattle multiple Vari*Lite 6Ks were on the rig, and these were replaced at the O2 by 47 of Colour Sound’s LightSky AquaBeams which have a 440W short-arc lightsource and are really punchy. “They are solid, really intense and I was very happy with them,” commented Neil. 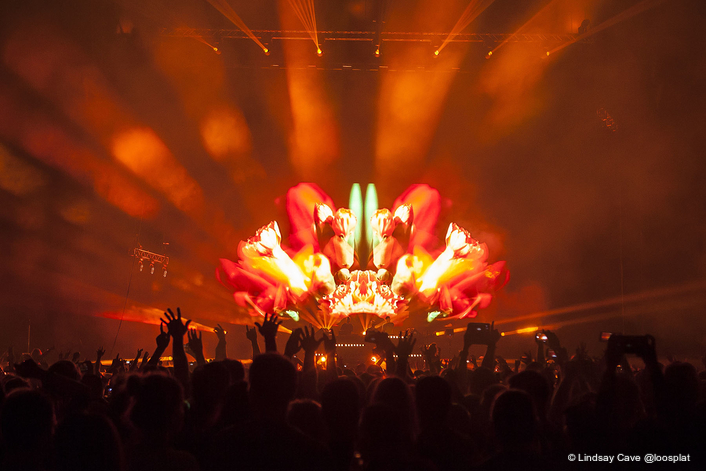 The fixtures were dotted around the over-stage trusses and on the floor. There was a semi-circle of AquaBeams on the downstage edge of the stage and more on a circular truss out in the arena, where they could become a kinetic roof effect that helped close down the space and keep the intimate and personal feel the band loves to create however big the actual space!
Twenty Robe BMFL Spots were deployed on the back and side trusses, giving the epic big light looks of the rig, and used for numerous sumptuous hi-impact wide gobo looks and classy fat beam scenes.

They blended extremely well with 28 more Spiiders which were also rigged on the trusses and the floor (in addition to the six front and back key lights).
Neil likes the intensity of the Spiider’s zoom and the quality of the beam, but most of all he appreciates how, with carefully application of the central 60W LED and ‘flower effect’, it’s possible to re-imagine some incredibly authentic looking Strobeflower simulations … remembering the heady early rave scene days when the best parties were ‘underground’ and a few of these legendary lightsources would often be the only source of illumination!

“I absolutely love that old skool effect” he commented, adding that the Spiiders are also hugely more robust than the Strobeflowers which were never originally designed to deal with heat, humidity and the other challenges of a rave environment!
At the back Neil created a wall of 15 x Portman P1s which produced some fantastic pixel-pattern looks. Some of these were rigged on Manfrotto stands on the floor below the screen with others on drop bars off their own truss tucked in above the screen. 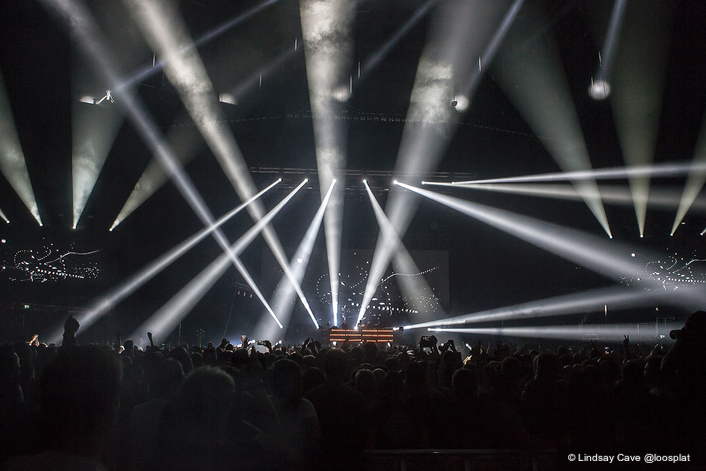 Their distinctive seven halogen bulbs were used to create a variety of cool, spacey looks. Neil had used them on the last European tour and for this show they were again pixel mapped via his ChamSys MQ500 console.
On top of this there were 30 x strobes and 24 x Showtec Sunstrips, the latter cladding the front of the DJ booth, where Neil wanted something different and a bit classier than the ‘standard’ strip of video screen.

Colour Sound also supplied 60Kgs of confetti and CO2 canons which were fired spectacularly into the crowd at the end of the show, bringing the action packed gig to a tumultuous close.
The video was co-ordinated and run completely independently by Dave Kyle, also stationed at FOH alongside Neil, utilising a Barco S3 processer / switcher which dealt with all in the inputs and outputting these to screen. Three robo-cams from Colour Sound were assigned one each to the three performers.

Colour Sound’s crew was chiefed by Sam Campbell, who was joined by Karl Lawton, Fergus Nobile, Jason Tuffin, Tom White, Mel Cornish, Stu Barr, Rosie Haigh and Sarah Payne with Jani Fodor tech’ing the video.
“The service from Colour Sound was fantastic as always” stated Neil, “A one off arena show is always logistically challenging, but they delivered at every stage of the process and sent a really excellent crew to site who were fast, efficient and a joy to work with”.

ER Productions supplied six 20Watt RGB lasers, and Adlib delivered the audio with a great sounding K1 system.
The biggest challenge relates Neil, was fitting everything into the O2 and delivering essentially the same show as they had in Seattle … and of course, getting it in on budget! However their tight production team and an array of leading suppliers ensured that the completely sold-out event was a massive success, whetting everyone’s appetite for the new album and a hectic performance schedule for next year.

Colour Sound Experiment
Above & Beyond