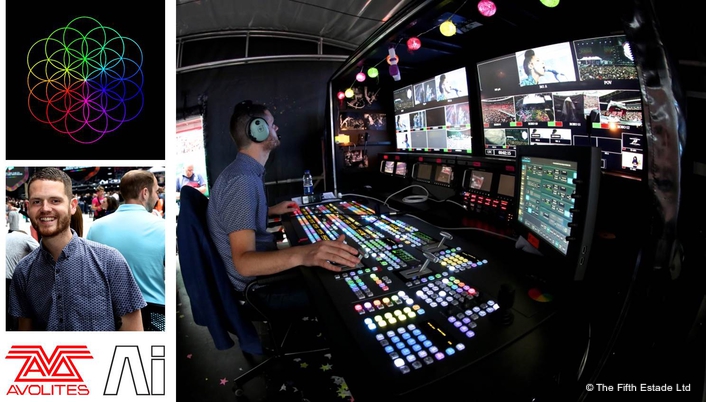 Crossing four continents, A Head Full of Dreams is a major stadium tour in support of Coldplay's seventh studio album of the same name. The Latin American dates ran from 31 March to 17 April. The European dates - including the band's seminal headlining of the Glastonbury Festival - were from 24 May to 6 July. On 16 July the tour moved to the US, where Chris Martin and his bandmates are playing 22 stadium and arena dates. It continues in December, with six stadium dates in Australia and New Zealand.

Coldplay's live shows are renowned for their high production values - requiring a sizeable creative and technical crew. Miles heads up a team of 14 -16, including the spidercam team and Leo Flint, the tour video programmer, who runs the Ai media servers and Barco e2 alongside Miles.

Miles and his team look after the tour's cameras, animations, visuals and the LED screens they're displayed on. For this gargantuan tour, Miles knew he needed to create a new and improved video system - specifically designed to deliver the ambitious creative brief.

As a result he selected eight powerful Ai R6 media servers - manufactured by London-based lighting console and media server manufacturer Avolites - as the core of this new system. This was partly because he had used them on Coldplay's last tour, Ghost Stories, and rated their technical prowess - particularly with regards to low latency SDI input and capacity for customisation. But his decision was also down to how approachable and adept he had previously found both the development team at Avolites and the manufacturer's London-based distributor, RES. 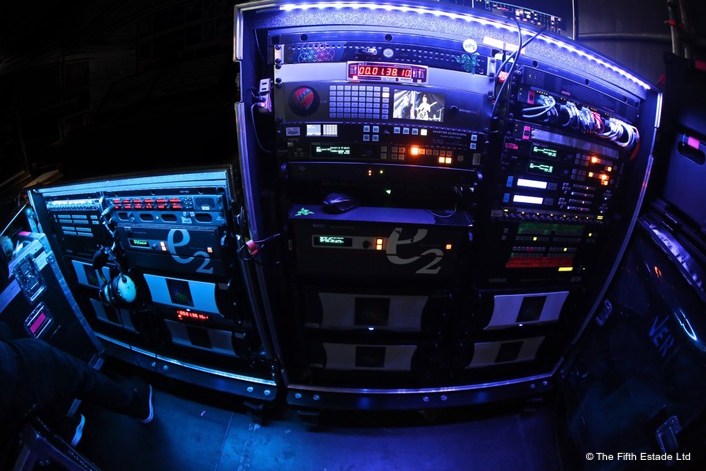 Miles elaborates: "We started working with Avolites media servers over two years ago, on the previous tour. We'd already developed a lot of ideas based on aspects of the server that I really liked and also some new things that I really wanted from a media server that didn't exist yet. I was lucky enough to get involved in the development process with the software team from Avolites for the last couple of software upgrades: version 8 and version 9. A lot of my input was to do with the frame delay between capturing and output.

"This came from the fact my big thing with media servers is live capture and using effects on everything I do. The programming environment behind Ai is Salvation, which gives us the ability to customise effects using a node-based engine. This means we can connect up lots of modules and pretty much any effect I dream up can be realised." 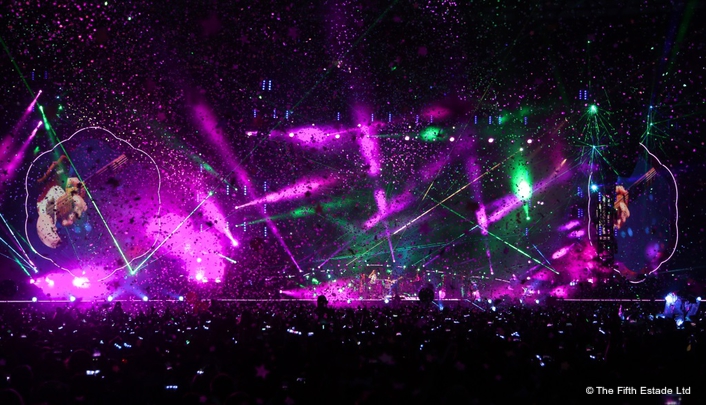 Dave Green of Avolites says: "I got involved very early on in the project to help Ben design an overall system. It consisted of eight R6 media servers, four of which are used for front end media playback. One does a big 4k screen, which, to my knowledge, is the first time full native 4k has been used on a stage show like this. The other servers take care of the side screens. Then there is the back up for each of those, so it's a fairly standard set up for a large scale show, apart from the 4k playback.

"What we did do was put in a set of downstream video servers that were there purely for the purpose of processing effects with minimal latency. So we took the outputs of what we call the 'effects servers' and routed them to the Encore 2, which is the final control system for the video walls. Alternatively we can route them through the other Ai media servers further downstream of that. That whole high level system design was unique to this project."

Working directly with Coldplay, RES also produced some of the more psychedelic graphics for the show - inspired by 1990s rave culture motifs. Green designed the real-time generative effect used in the opening sequence, which is based on the tour's logo and album cover image of the flower of life - a geometric pattern made up of a series of interlocking circles. At the request of Miles, he was tasked with making around 20 effects over the last 12 months, including a realistic looking prism style kaleidoscope, an effect which turns live footage into laser beams and various other psychedelic wonders. Green is proud of the stunning result, not least because it takes him back to his - and business partner Mark Calvert's - roots. 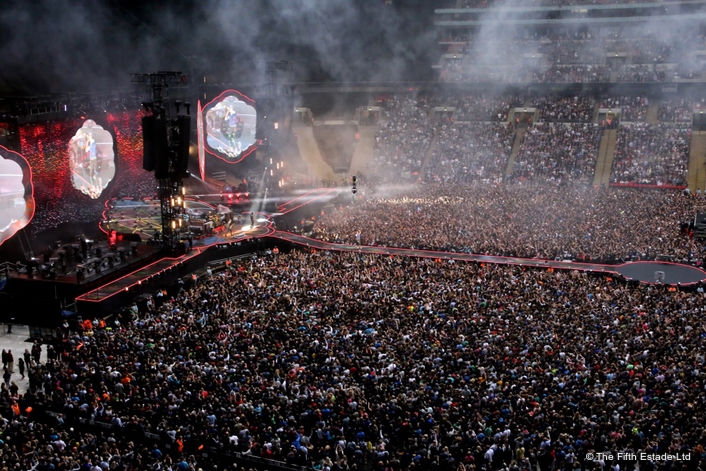 "Ten or fifteen years ago the psychedelic scene got us into making visuals," says Green. "We feel as though it's now come full circle. We started VJ-ing on raves, never thinking for a moment that one of the biggest bands in the world would employ us commercially for making similar psychedelic patterns."

One of the biggest challenges on the project for the Avolites, RES and Miles team was the integration of the live FX system 'Notch' formerly known as 'Demolition'. 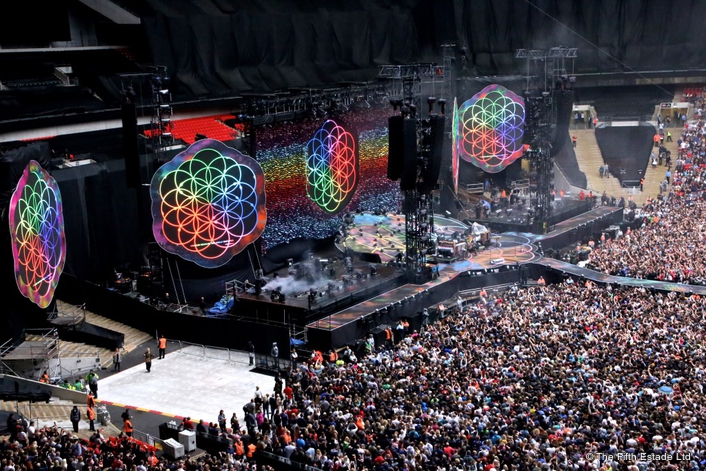 "The Notch tool runs as a plug-in inside Ai and allows designers to create real-time content and video effects," explains Green.  "It's designed to utilise the very latest software techniques, squeezing every drop of performance out of the graphics hardware, which ultimately enabled us to deliver Ben's and the band's full visual wish list."

Avolites' Sales Manager, Stephen Baird-Smith, states: "We are delighted that Ben chose Ai servers and software for his ambitious Coldplay video design. As the project evolved it became clear that it would be particularly demanding, especially with the strong emphasis on live video effects. But we like a challenge, especially when the functionality developed alongside a project can strengthen the entire range, for all users." 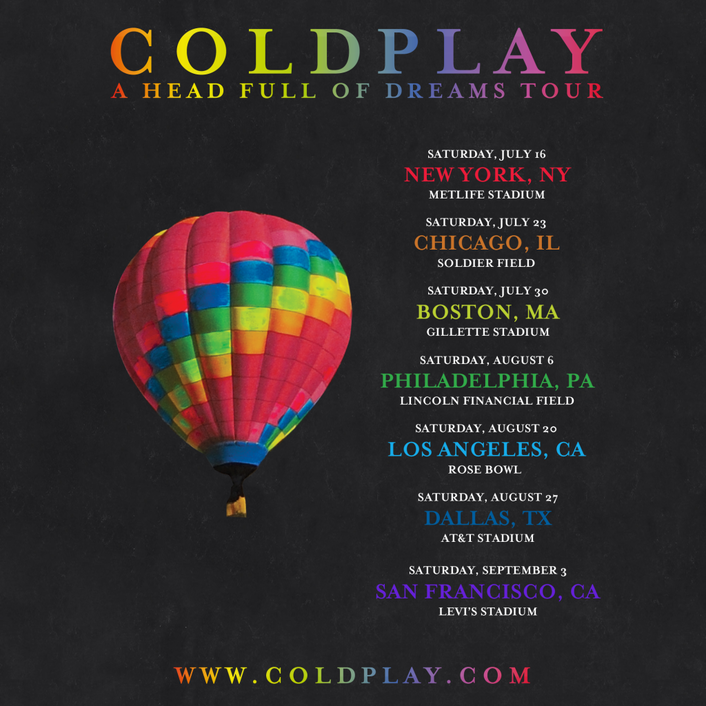 Coldplay's tour is on such a large scale that a whole team of collaborators works on the creative vision behind it.  This includesthe Avolites Ai product development team, RES, the band, their former-manager-turned-creative-director Phil Harvey, their production and lighting designer Paul Normandale and Miles. "I was lucky enough to pick my dream video team, everyone involved has been key to realising this complex setup," concludes Miles. "I consider myself very lucky to work with so many skilled technical and creative people."